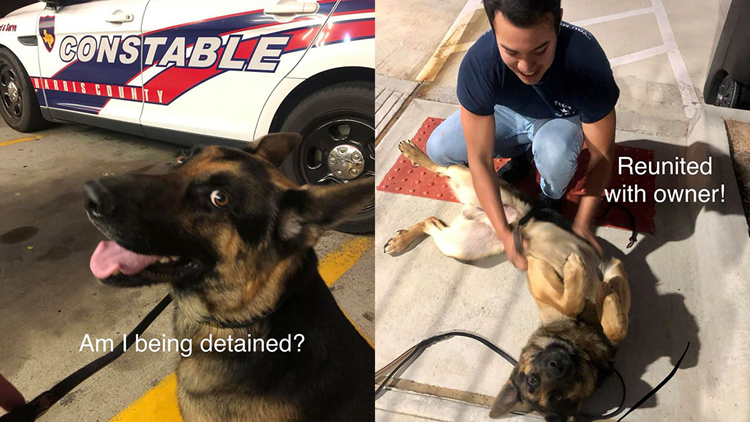 Reunited: Lost dog who 'trapped' neighbors in homes turns out to be 'goodest boy'

On Jan. 9, Deputy Leah Sipe responded to an apartment complex near the intersection of Aldine Westfield Road and Woodcreek Lane.

Residents said they felt trapped in their homes while a loose dog was wandering around the complex.

When Sipe showed up, she shook a bag of dog food, which did the trick.

The dog jumped into her patrol vehicle and, as it turns out, she said, the dog was not aggressive at all.

In fact, Sipe said he was one of the the "goodest boys" she had ever met.

Animal control wasn't able to respond due to the time of the call, so another off-duty officer and his wife met Sipe and held the dog until animal control could take over.

Sipe posted photos of the dog to social media and was able to reunite the dog with its owner.

RELATED: Boy's emotional reunion with lost dog is the best gift of the season

RELATED: Veterinarians in Australia believe endangered dingo pup was dropped by an eagle from the air into backyard

RELATED: 'My world is gone without him. I need him' | Texas Army Veteran searching for lost service dog

RELATED: Owner to be reunited with dog taken from restaurant parking lot