A University of Houston coach asked peers to send new shoes and shirts for Houston Harvey victims, and thousands donated. However, NCAA rules stand in the way. 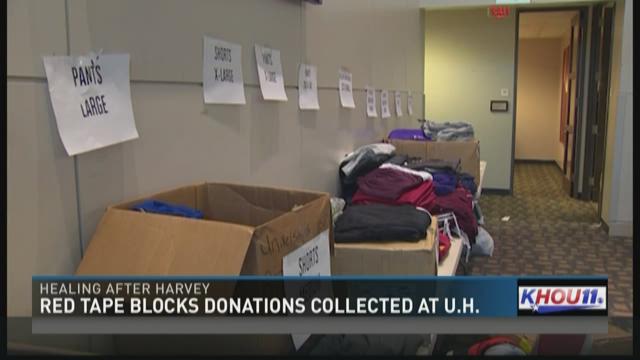 Editor's Note: In a tweet on Saturday, the NCAA wrote, "We encouraged schools to do what's best to help hurricane survivors. As we told AAC Thursday, Houston can give donations to anyone in need." Read more.

The coach asked peers to send new shoes and shirts for Houston Harvey victims, and thousands donated. However, NCAA rules stand in the way.

Some just sent letters and everything they had.

“Some (letters) made you cry too," Sampson said. "We have a letter from a high school that said we only had four pairs of shoes we could send you. Come on now, you think about that.”

NCAA rules, though, stand between donations and kids in need.

“They don’t want us sending all this nice gear to the top recruit in Houston," said Lauren Dubois, senior associate athletics director for UH. "But, obviously that is not our intention at all.”

Dubois said the program risks punishment if they give anything to potential recruits, their parents or youth leagues.

So, the university first offered everything to the Red Cross, Star of Hope and Hurricane Harvey relief. All had different needs.

The school is now asking legitimate charities to step in, take donations and give them away as those organizations see fit.

It is a challenge Sampson accepts even if he wishes rules made things easier.

“When you do something out of the goodness of your heart, when you have so many people around you helping, it’s not hard," he said.

UH asked the NCAA for what’s called a legislative relief waiver, which would relax the rules so Sampson can give donations away faster. The NCAA has yet to make a decision.