Deputy constables say Ronald Lee Haskell, 33, has been charged with one count of capital murder (multi) in connection with the shooting of seven people, including children, at a home in Spring. 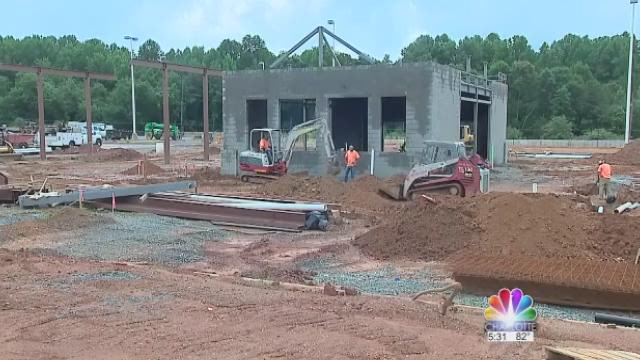 SPRING, Texas Deputy constables say Ronald Lee Haskell, 33, has been charged with one count of capital murder (multi) in connection with the shooting of seven people, including children, at a home in Spring.

The shootings happened a little after 5 p.m. Wednesday at a home in the 700 block of Leaflet in the Enchanted Oaks subdivision.

He came to this location yesterday afternoon late and came under the guise of a FedEx driver wearing a FedEx shirt, said Constable Ron Hickman.

Detectives said Haskell knocked on the front door of the home and when the 15-year-old girl answered he askedfor herparents.She told him they were not home and so he left.

Investigators said he came back a short time later and asked her again for her parents, but this time he told her his name and the girl recognized him as her ex-uncle. She tried to close the door on him, but he kicked it in, detectives said.

(He) gathered up the children that were here and awaited the arrival of the parents, Hickman said.

Detectives said Haskell had come down to Houston from Utah to search for his ex-wife, who lives out of state and was not at the home.

He had tied them face down, asking them about where his wife was. They did not know, Harris County Prosecutor Nathan Moss said in court Thursday morning. He then shot all seven of them execution-style in the back of the head.

Deputies said the couple s 15-year-old daughter Cassidy, a survivor of the mass shooting, suffered a bullet fracture to her skull. She played dead until the suspect left and then alerted authorities that the gunman was on his way to her grandparents home to kill more relatives.

Sources told KHOU 11 News Reporter Malini Basu that Haskell believed his ex-wife s family had convinced her to leave him.

The deputies beat HaskellHJ to the grandparents home and a standoff ensued. After more than three hours of sitting in a cul-de-sac, Haskell surrendered.

During that time, Deputy Thomas Gilliland of the Harris County Sheriff s Office said, there were two hours of constant talking with a man armed with a pistol to his head and who had just killed six people.

Gilliland said Haskell was cool as a cucumber. He said that when he and other officers first approached, Haskell was just sitting in his car looking out at us.

This concluded the way we wanted it to, Gilliland said after the surrender.

Gilliland said the teenager who survived was in very critical condition at Memorial Hermann Hospital in Houston as of late Wednesday night.

Authorities have not yet released the names of all the young victims.

I have not personally, in 40 years, seen a tragedy, in one family, that is this horrific, Gilliland said.

Contrary to earlier statements made by authorities, Haskell s adopted kids were not among the shooting victims.

As he was transferred to the county jail, the suspect was still wearing the FedEx uniform. FedEx said Haskell was employed as a contract worker in a statement released Thursday morning:

Our heartfelt thoughts and condolences go out to all those involved in this tragic incident. Mr. Haskell formerly provided service for FedEx, but has not done so since January.

According to court records, Haskell was arrested in 2008 for domestic violence in the presence of a child, and he violated a protective order (showing up at child s school) in 2013.

Haskell remained in the Harris County Jail Thursday, with no bond, and was being watched 24/7. Doctors and psychologists were talking to him after a judge ordered a psychological evaluation.

Haskell s own mother, Karla in San Marcos, California, filed a request for a restraining order as recently as July 3, 2014. She said her son became angry with her because she had spoken with his ex-wife. In documents obtained by KHOU 11 News, Karla Haskell says her son Ron, forcefully covered my mouth with his hand and pushed me inside the home in the San Diego suburb.

Then she says he duct taped her wrists together and then taped her right arm to a computer chair. Then she said he yelled at her and placed his hands around my neck trying to choke me and caused me to pass out. She says he claimed he was going to kill me, my family and any officer who stops him.

Ron Haskell's sister had also filed a request for a restraining order November 2013 for similar threats and abuse.

Meanwhile, the attorney for Ron Haskell's ex-wife, the alleged target of his rage, confirms that the couple divorced last Valentine s Day after what she claimed were years of verbal and physical abuse.

We were concerned about his stability, said attorney Ali Barker. Obviously we didn't think he would go this route, this direction.

Ron s ex-wife sought refuge temporarily with her sister Katy Stay and her family in Spring.

He's a monster. This tragic incident resolves from that, said Barker. I think any human being who can take the life of another human being in cold blood like that, I'd define that type of person as a monster.

The following is a statement by Roger Lyon, father of Katie Stay. She and her husband were among six people shot to death Wednesday at a home in Spring.

Stephen and Katie Stay and their beautiful children were an amazing and resilient family. They lived to help others, both at church and in their neighborhood. We love them beyond words.

Click here to donated money to the Cassidy Stay Fund.