Texas A&M students share their stories of how Dr. Musoma has impacted their lives. 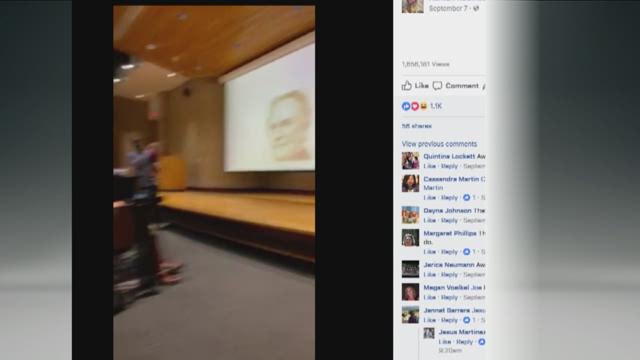 COLLEGE STATION, Texas—It’s been a blockbuster year for one professor at Texas A&M University.

Just a few months ago, Dr. Henry Musoma invited a student to bring her son to his Mays Business School class when her childcare fell through.

The post went viral, bringing the Mays Business School professor into the national spotlight, and an invitation to The Ellen Show.

The story was all over social media and newscasts, allowing the world a glimpse of the qualities that students across the campus of Texas A&M said they’ve known for quite some time.

Oralia Estrada faced many challenges in her life before coming to Texas A&M, including the loss of her father.

“I was alone. I’d been through so much,” said Estrada.

She was struggling as a freshman on such a big campus, and then she met the professor through a mentoring program for first generation college students.

“That’s where Musoma comes into place. He said, ‘Don’t live in the past, live in the present and enjoy what you have,’” she said.

Estrada said her life changed when Musoma showed her the true meaning of kindness.

“I mean no one can replace my dad, but to know somebody cares for me that way, it’s special,” she said.

That compassion and that genuine love for others is something, Musoma said, is just part of who he is.

Musoma said it’s all about creating a village and spreading that generosity to others.

Like last week, when a student couldn’t afford the textbook in time for the upcoming test, Musoma jumped into action.

He passed a box around the room asking students if they could spare a dollar for a fellow student.

That’s why Alexis Guillory took to social media to share the act of kindness that she saw in her class.

I love a&m bc today when a student in my management 309 class couldn’t afford the textbook, our prof (Musoma aka the best ever) passed around a donation bucket that easily collected enough to buy the book twice
thx n gigz

“He’s seriously probably the most giving person that I’ve met, and I’ve known him for three weeks,” she said.

For Musoma, he said it’s not about the attention. It’s about teaching students to love themselves and each other.

According to the students, Musoma is teaching lessons that will remain in the lives of many students for years to come.

“That’s how he’s created this village, by showing kindness to the world, kindness that we don’t see as often,” said Estrada.

“And, he doesn’t expect anything back,” she added.

Other students feel the same way about Musoma.

“I feel like he’s definitely impacting students at Texas A&M, but I can see him impacting the world,” said former student Elise Thorpe.

“Not only is he the only professor I’ve had that’s been on a television show, he’s probably the only A&M staff member that I’m ever going to know that has generally gone out of his way to help students more than to help himself,” said A&M student Cooper Ross.

Even though the social media posts and the appearance on Ellen have brought him a sort of celebrity status, Musoma said he just feels blessed by all the students who will forever have an impact on his life.

“I don’t want to disappoint them. They’re part of my family,” he added.