The video shows a man opening a Blue Bell carton in a Walmart and licking it.

PORT ARTHUR, Texas — Police in Port Arthur now say that a man seen in a Facebook video licking a container of Blue Bell ice cream had a receipt showing he purchased the ice cream.

A Southeast Texas Facebook user identifying himself as "Dapper Don" created and posted the video at about 6 p.m. Monday evening.

Port Arthur Police have been in contact with "Don" who they say did show them a receipt for the ice cream saying that he purchased it after creating the video.

Police tell 12News they are continuing to investigate and gather evidence.

People reached out to the department via their Facebook page, Crime Stoppers and to individual officers, Hebert told 12News.

Port Arthur Police Chief Tim Duriso told 12News Tuesday morning that currently no charges have been filed but they are waiting on the district attorney's office to review the case.

Don could be charged with Tampering with a Consumer Product, which could result in a 2 to 20 year prison sentence.

The video appears to show "Don" opening a freezer door at a store and licking a carton of Blue Bell ice cream before returning it to the shelf.

Commenters on the video post tagged 12News as well as the Port Arthur Police Department Facebook page. Many people on the Facebook post identified the grocery store as the Walmart on Twin City Highway.

"I trolled all Southeast Texas," he said.

He said he had no idea it would go viral so fast and that he heard from police about three hours after posting the video.

The engagement has also brought negativity toward Don.

"Just saying they are going to beat me up and try to find me," said Don. "They're going to lick my address and stuff like that."

In March 2017 it appears that "Don" ran onto the court at the Toyota Center during a Houston Rockets game against the Cleveland Cavaliers and was removed from the court by police and security.

Blue Bell told 12News that they identified the store and removed all of the half-gallon size Blue Bell Homemade Vanilla and replaced them.

“The safety of our ice cream is our highest priority, and we work hard to maintain the highest level of confidence of our customers. We view the tampering of our products very seriously,” Blue Bell spokesperson Jenny Van Dorf told 12News via email on Tuesday.

12News received a statement from Walmart in regard to the video.

Walmart sent this statement via email: “If food is tampered with, or a customer wants to leave the impression that they left behind adulterated product, we will move quickly with law enforcement to in identify, apprehend and prosecute those who think this is a joke—it is not.”

In July, a San Antonio teen made national headlines after she was recorded licking a container of Blue Bell ice cream at a Walmart in Lufkin and putting it back on the shelf.

Lufkin Police launched an investigation after the video quickly went viral and made national headlines. The video was viewed more than 10 million times.

Because of her age, the teen was not identified nor charged. The case was handed over to the Texas Juvenile Justice Department . 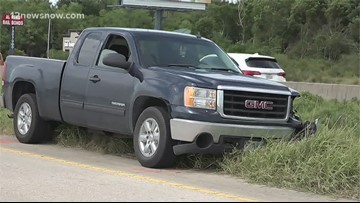 Blue Bell responded to that video saying in a statement "this type of incident will not be tolerated".

A 'copycat' Blue Bell licker was arrested in Louisiana July 7. WBRZ in Baton Rouge reported Lenise Lloyd Martin III, 36, was charged with unlawful posting of criminal activity for notoriety and publicity and criminal mischief for tampering with property after a video posted on social media allegedly showed him pulling a carton of Blue Bell ice cream from a freezer, opening it and licking it.

He also poked his finger inside before putting it back on the shelf, according to reports.

The ice cream company posted the following statement on its website after the original incident at the Lufkin Walmart in July:

"Food safety is a top priority, and we work hard to provide a safe product and maintain the highest level of confidence from our consumers.

During production, our half gallons are flipped upside down and sent to a hardening room where the ice cream freezes to the lid creating a natural seal. The lids are frozen tightly to the carton. Any attempt at opening the product should be noticeable.

We will continue to monitor this situation."

Food safety is a top priority, and we work hard to provide a safe product and maintain the highest level of confidence from our consumers.

During production, our half gallons are flipped upside down and sent to a hardening room where the ice cream freezes to the lid creating a natural seal. The lids are frozen tightly to the carton. Any attempt at opening the product should be noticeable.

We will continue to monitor this situation."