Meet Abigail, a girl who underwent 3 brain surgeries before her first birthday

With the help of PBRC, Abigail is making big strides in the world despite being born three months early. 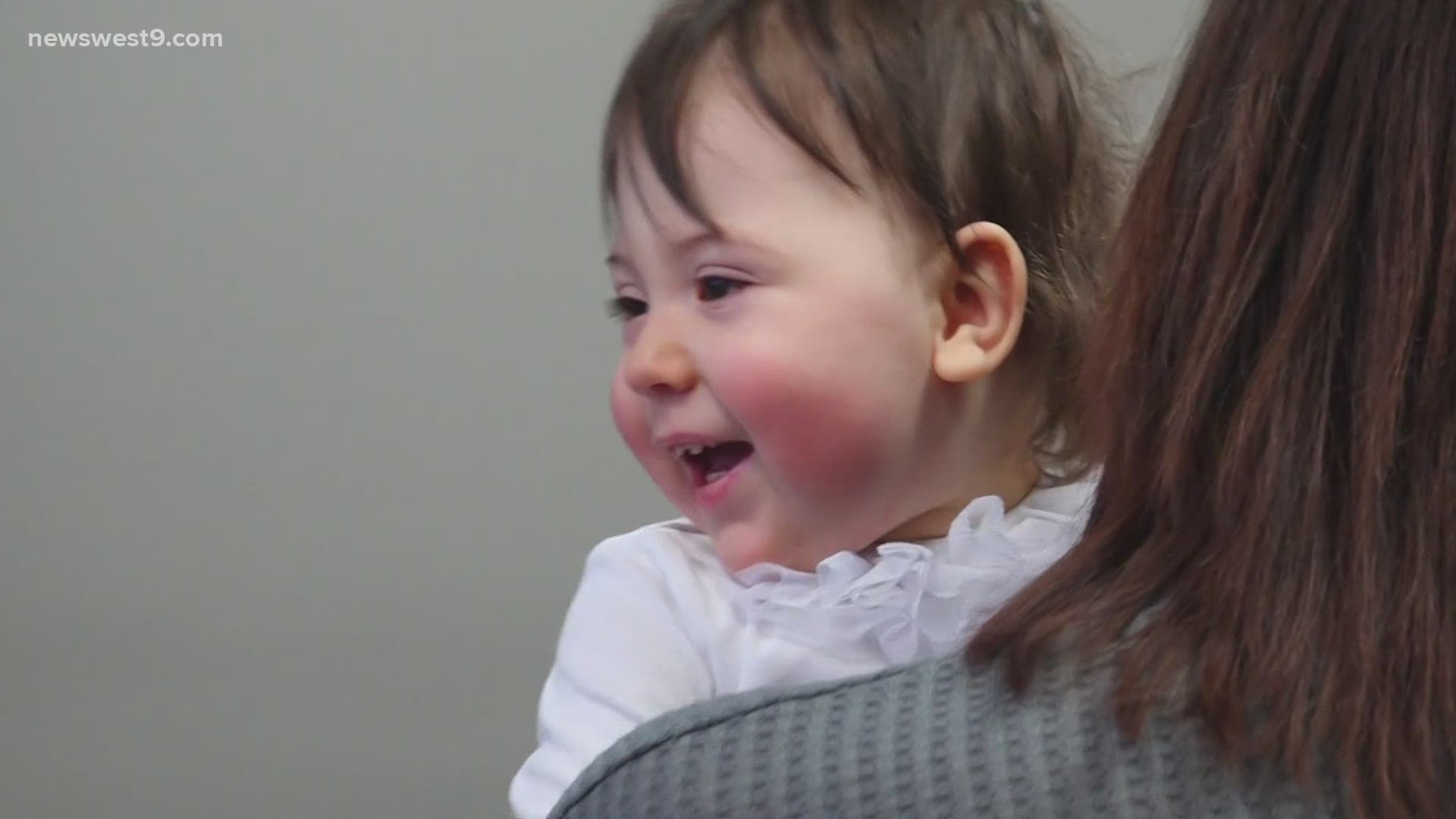 ODESSA, Texas — Abigail Terry is one of the smallest patients at the Permian Basin Rehab Center.

"She is one of my favorites. She is the most precious little thing, ever. Her personality shines," said John Trotman, an occupational therapist with PBRC.

Little Abigail has the kind of smile that could soften the hardest of hearts, and at nearly two years old she's mastered a quality most of us are still trying to figure out.

To get to this point took a lot of work on Abigail's part.

She had an early start at life, born three months early, and endured more in her first year of life than some people do in an entire lifetime.

"She was born with pneumonia, hydrocephalus, E. Coli and meningitis," said Danika Terry, Abigail's mom. "At five weeks, she got brain surgery. We knew there were going to be delays but we didn't know how bad it would be."

She had three brain surgeries before her first birthday. Treatment up until that point consisted of home visits, and there wasn't a lot of progress.

It was after one of Abigail's surgeries that her doctor recommended the rehab center to the Terry family.

"We just saw a big difference from doing the 30min therapy at home every two weeks to coming here…it was a big, big, big difference," Terry said.

"When I first started seeing her, she was unable to sit by herself and she had to be completely supported," Trotman said.

"She was not talking or babbling or anything like that," her mom said.

Abigail's challenges have revolved around meeting early milestones, each a foundation to her development. She's been working with speech, physical and occupational therapists at the rehab center to help build her foundation.

What does that look like? For physical therapy, repetition is key.

"You have to pay attention to her body movement at all times. She was kicking her legs out backwards and to the sides and that's not what I want. I have to constantly reposition," Amy Burks, a physical therapist with PBRC said. "We want her to get comfortable with moving from place to place and getting in all of those different positions that she can't do by herself right now."

"Now she is sitting by herself, she's reaching above her head, she's reaching out to her side. She's now putting her hands down and reaching across her body and everything. I want her to be able to explore her environment without the worry of falling over," Trotman said.

There is also a focus on speech.

"We're getting her ready for some of those first words. She's started saying hi, as we've seen a lot of," Helen Cramm, speech language pathologist said.

That milestone has opened up a new world for Abigail and her family.

"Now I'll sit her in the cart at the grocery store and she'll just say hi to everyone," Terry said.

This is only the start-a future with no limits, and all of it on Abigail's terms.

For more information on how to help people like Abigail through the PBRC, you can click or tap here.