A little boy’s first day back to school went from jitters to joy thanks to a very special surprise escort. 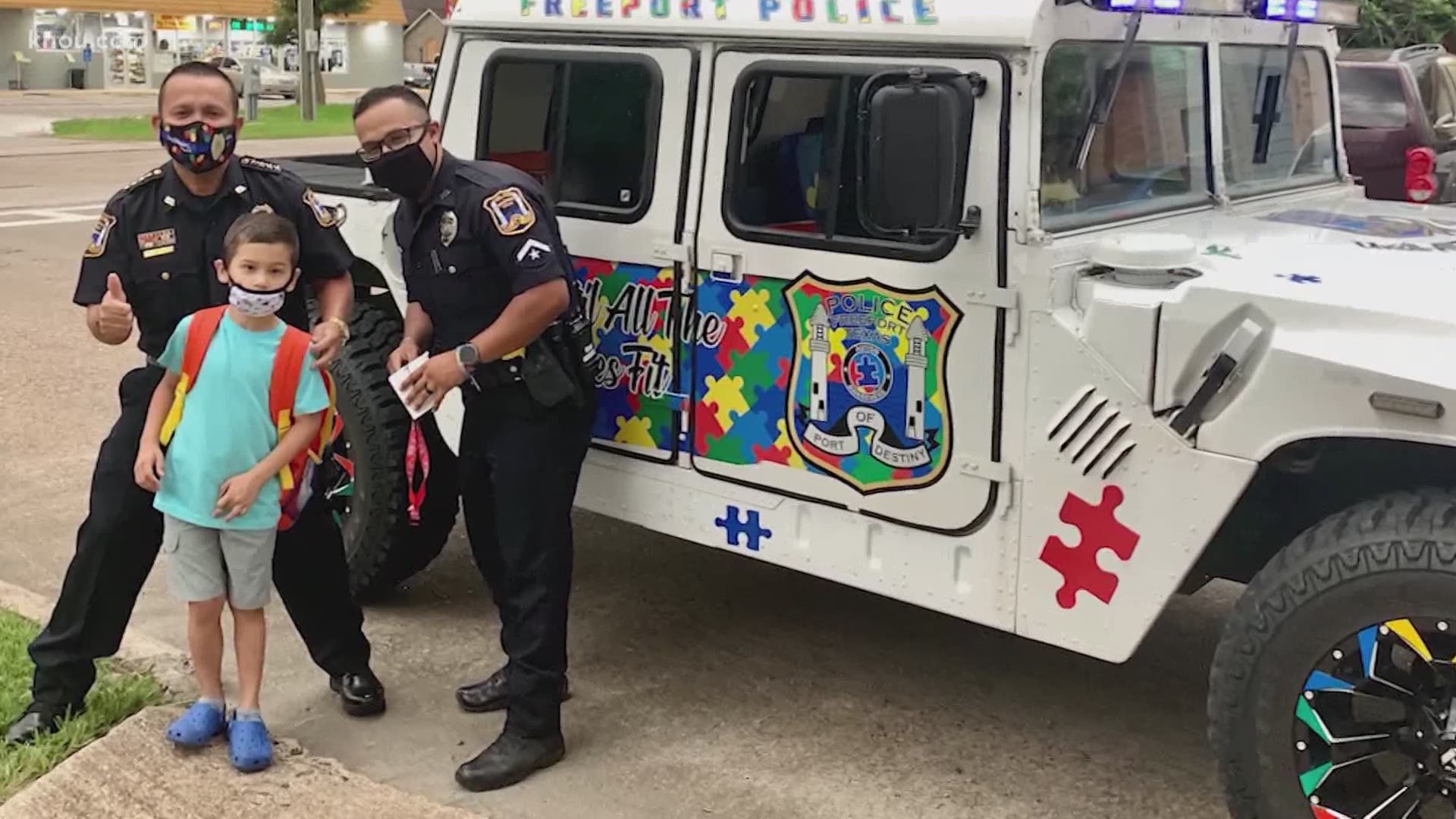 FREEPORT, Texas — Like so many kids, for the past 2 weeks, 6-year-old Liam Sprinkle has been learning online.

But unlike many, he’s been doing so with a disability. Liam has autism.

“It was all crying in front of the computer,” explained his mom, Veronica Sprinkle. “Autism is so different in every child. And I still don’t even know how to treat my son, because sometimes, he surprises me with different behavior.”

It’s been tough, which is why Sprinkle and her husband decided face-to-face learning with Liam’s teachers and therapists was best.

How about this one... Freeport Police made back to school very special for a little boy with autism, even though he lives no where near their department! A story to make you smile tonight on #KHOU11 at 10. #autism #backtoschool #actsofkindness #texas #houston pic.twitter.com/TbRxb2XQXS

His first day back to face-to-face learning was Tuesday. Because Liam has had such a tough week, Sprinkle wanted his first day to be special.

She had an idea on how to do that, remembering an "autism Humvee" she saw in a parking lot in April that Liam loved.

The Humvee belongs to the Freeport Police Department, something Chief Raymond Garivey uses to bring awareness to kids with autism.

“People treat them sometimes...different,” Chief Garivey said. “We are all different in one way, shape or form, but we are all from God. So that’s what we are doing.”

Chief Garivey was surprised on Monday when he got a call from Sprinkle asking if they’d be willing to bring Liam to school in that special Humvee.

“She said he really needed something to lift his spirits and put a smile on his face," Chief Garivey said.

Liam doesn’t even live in Freeport. He lives more than an hour away in Pasadena. The trip in a Humvee would take close to an hour and a half each way.

“I had to make it happen,” Chief Garivey said. “Caring for somebody has no city boundaries, no city limits.”

Tuesday morning, Chief Garivey was there to pick Liam up in the colorful Humvee and bring him to school, flashing lights and all.

“He was so happy! He came running out as soon as we parked out in front of his house. He was excited, waving at people out the window. The smile on his face told the story, that’s all that mattered," Chief Garviey said.

The act of kindness meant so much to Liam’s family, too.

“Memories that I'm never, never going to forget,” Sprinkle said. “As a mom, it gives me a lot of satisfaction to know that some people are willing to help others.”

From a rough ride to a joy ride, thanks to strangers who care.

“We work for God,” Chief Garivey said. “It’s our job to help Him make people happy on his earth.”