"It was never put out there for people to talk about it," said Syed Ali of his offer. "It was only put out there, genuinely, for the people who can’t afford it." 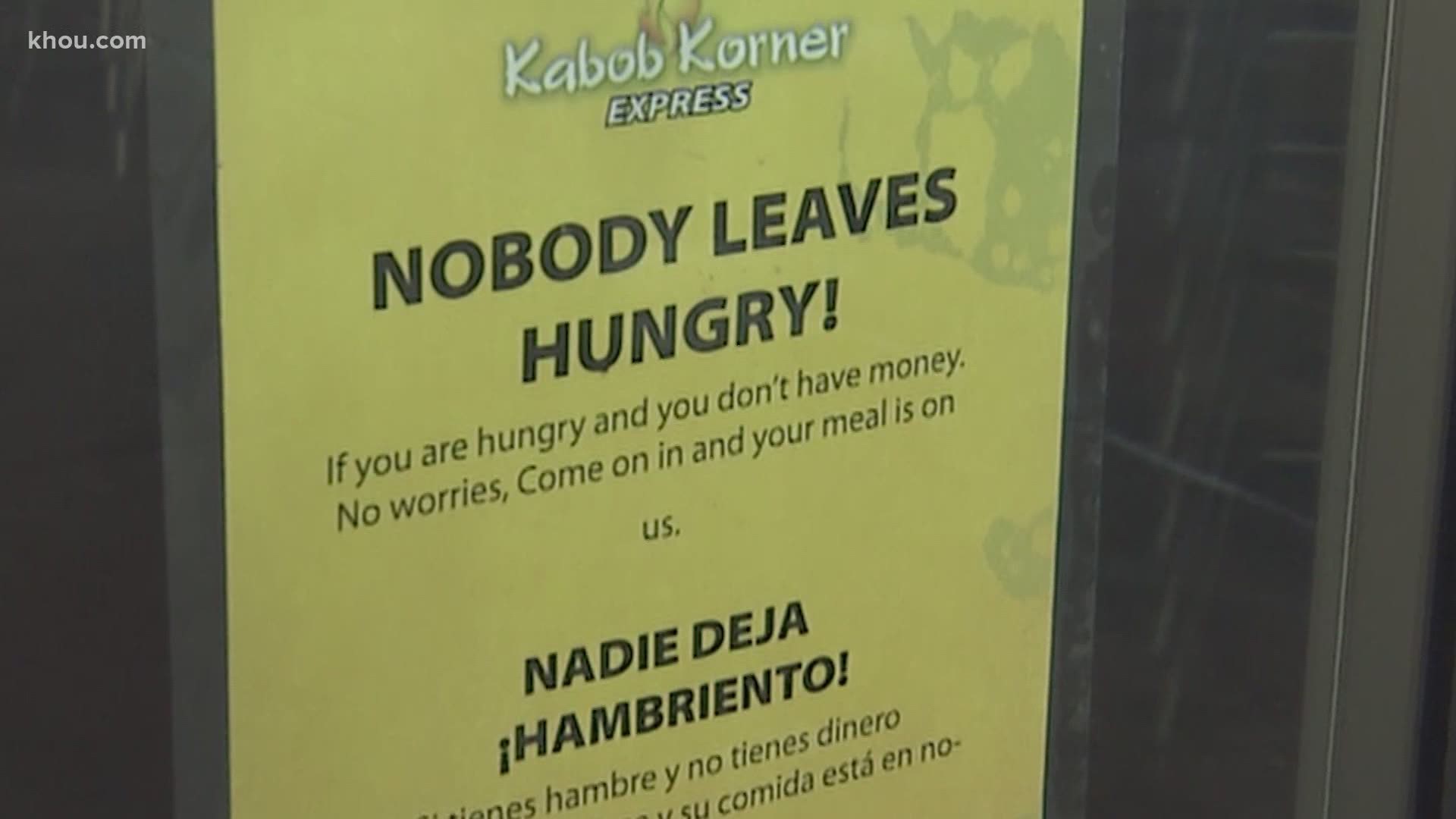 HOUSTON — The pandemic is doing a number on local businesses, restaurants included. From tacking on surcharges to laying off staff, Houston-area small business owners are doing everything they can just to keep their doors open.

Part of Syed Ali’s survival plan is community service. Ali co-owns a trio of Kabob Korner restaurants with his brother and sister. The first location opened in 2007.

A location in west Houston, off I-10 between the Beltway and Gessner Road, opened three years ago. The small business owning siblings have weathered a recession and hurricanes.

In this pandemic, “I’m making the bread myself. Washing dishes. Everything,” and anything Ali can do to keep his doors open, his staff paid and neighbors fed.

“It says, very directly, that if you don’t have any money, don’t worry about it. Come inside and we’ll feed you,” said west Houston resident Matthew DuVal of a sign that hangs on the door of Kabob Korner Express. “It gets me a little emotional. He’s very kind, to offer that to anyone.”

Ali and his family have offered free meals to anyone who can’t afford to pay for one since day one of opening their restaurant business. DuVal didn’t know that. And in this pandemic, DuVal said he doesn’t see those types of offers often. So he posted about the sign and his experience on Nextdoor.

“It was never put out there for people to talk about it,” said Ali of his offer to help feed the community. “It was only put out there, genuinely, for the people who can’t afford it.”

Why wait for a chance to give? @Kabob_Korner will feed everyone, at all 3 of its locations.

A #khou11 viewer couldn't believe it.

A small business parting with profit in this pandemic?!

Owner Syed Ali says, it's the ONLY thing to do.#TexansHelpingTexans today at 6pm!🥰 pic.twitter.com/dPrEsPCaes

Kabob Korner offers to share a chicken shawarma plate for free. It comes with fresh rice, lentil soup and homemade Naan. There’s a special button on the register to ring up the free meal. “So our kitchen doesn’t know who’s getting the food,” and so families can dine with dignity.

In a world where small businesses are so cash-strapped, Ali could have easily said, as a restaurant, times are tough. He can’t afford to give away food and be able to pay employees and keep doors open.

He said if you think it’s the bottom line that makes a person rich, “it’s not true. What makes us really rich is what’s in here,” said Ali as he pointed to his heart. “It’s not that we need food. It’s the idea. That’s what we need. And that’s what we need to spread.”