Twenty-one people were on board the plane when it slammed through a fence and into a power line during takeoff and then exploded into a fireball. 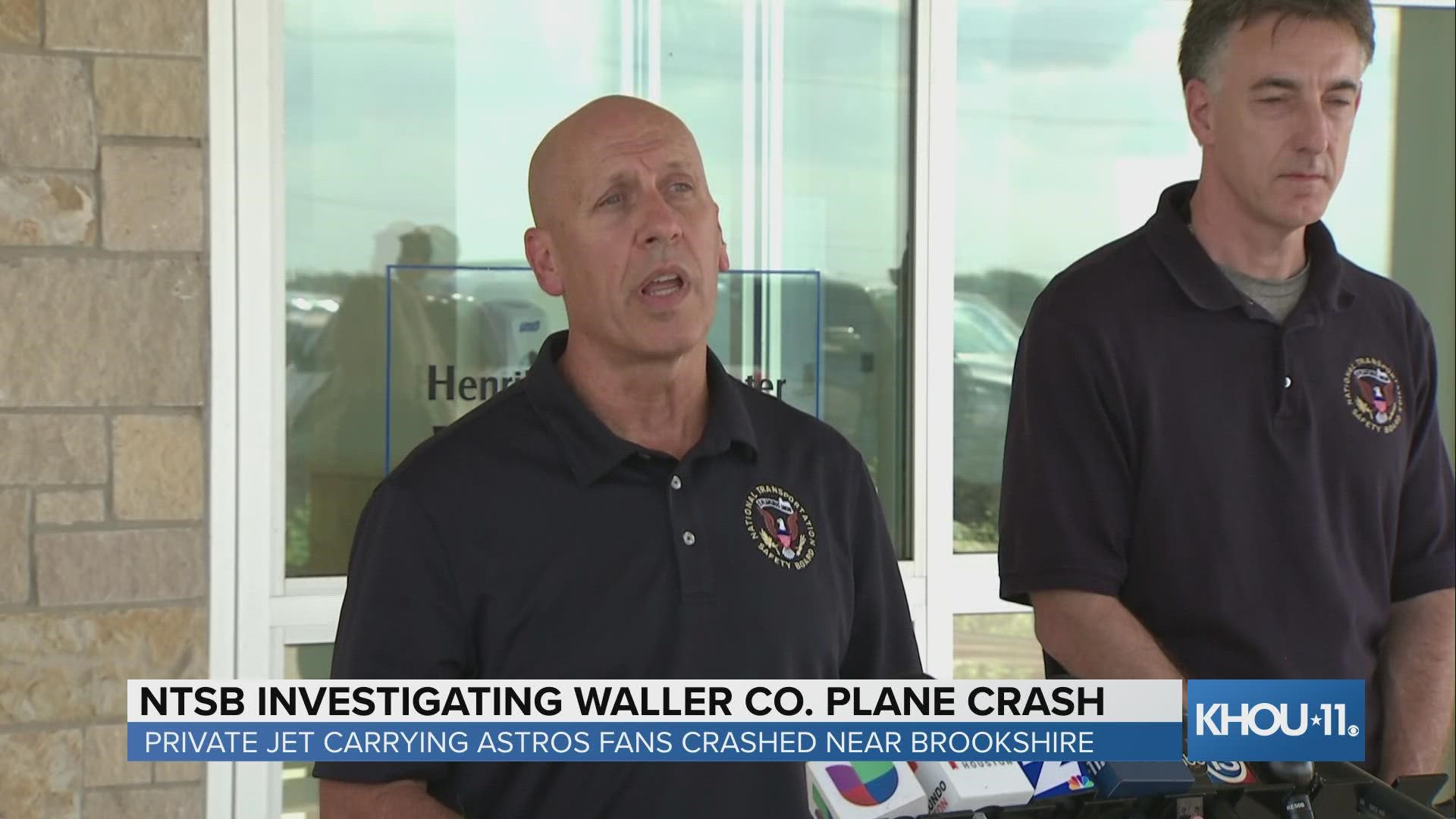 WALLER COUNTY, Texas — National Transportation Safety Board investigators have arrived at the site of the fiery plane crash that happened near Houston Tuesday.

All 21 people on board the MD-87 survived without serious injuries after jumping down emergency slides as the plane exploded into flames.

The NTSB said their team will likely be on site for about a week or two gathering evidence, but the entire investigation could take up to 18 months.

Investigators will be examining engines, survival factors, operational factors, human performance, maintenance records, air traffic control and more to determine the cause of the crash in Waller County.

So far, they've  interviewed crew members and witnesses. They have started documenting ground scars on the roadway and secured the first batch of maintenance records.

The cockpit voice recorder and the flight data recorder are both on their way to Washington to be downloaded despite heavy fire damage, NTSB said.

Investigators ask anyone who may have pictures or videos of the plane crash to email witness@ntsb.gov.

Eighteen passengers and three crew members were on board the MD-87 when it slammed through a fence during takeoff and then caught fire. The group was headed to Boston for the MLB play-off series between the Red Sox and Houston Astros, the plane owner's wife told KHOU 11.

"Things were flying around and when it finally came to a stop they just told us to get out get out and we unbuckled ourselves and we ran," said one of the passengers. "It was it was already on fire before we got it out it!"

The passenger said the pilot told them that he and his co-pilot couldn't pull the plane up in time, so they tried to brake but there just wasn't enough runway left.

RELATED: 'Get out, get out!': 21 Astros fans survive after plane headed to ALCS crashes, burns near Houston

Fortunately, everyone was able to evacuate the plane safely after the crash. Only two people were taken to nearby hospitals for minor injuries, according to the Texas Department of Public Safety.

The plane was owned by Houston developer and Rodeo Houston director James Alan Kent, who was one of the 21 passengers on board. Photos from the scene show this was no small aircraft. In fact, the plane used to be an airliner so it had extra safety equipment, including exit slides.

There were 21 people on board, which included passengers and crew. Thankfully, everyone used the emergency slides to exit and make it to safety before a fire consumed the plane. There was a minor injury sustained by a passenger going down the slide but thank God that there was no loss of life.

Credit: AIR 11 / KHOU
An MD-87 carrying 21 people from Houston to Boston for the ALCS crashed and went up in flames in Waller County. Everyone survived and there were no serious injuries.

Kent said a full investigation will be conducted to determine what caused the takeoff issue. He and his team are cooperating with the FAA and the NTSB to make sure all of their requirements are met.

"After the fire, the plane became a complete loss, but we were blessed that no one was seriously hurt," Kurt said.