This story is about a folder which was listed for sale 20 or 25 years ago on eBay. It was purchased by an upstate New York man whose son loved baseball. 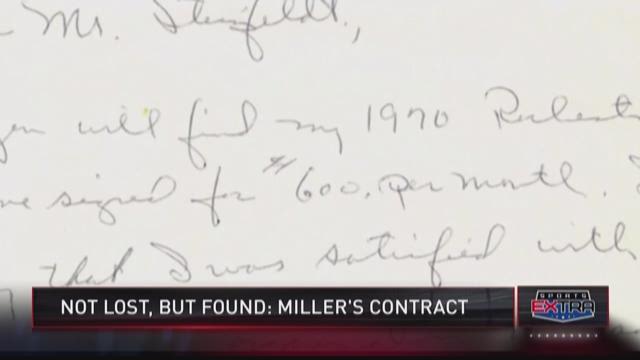 Never in a million years, or at the least the 50 years he’s been around baseball, did Dyar Miller expect to see this.

This story is about a folder which was listed for sale 20 or 25 years ago on eBay. It was purchased by an upstate New York man whose son loved baseball.

KHOU 11 Sports Anchor Jason Bristol has no idea why his father bought the folder, but Bristol knows the rightful owner of its contents: Dyar Miller, the Astros’ Class AAA pitching coach.

“You drove a hard bargain (back then). You wanted $900 a month,” said Bristol, who handed the folder to Miller who was unaware of what was inside.

And what did Miller end up signing for?

“We did this all the time. No agents back in those days, you know?” Miller said.

The folder contains a fascinating back and forth of negotiating: Miller writing, "I’m worth this," and the Red Wings’ general manager repeatedly offering much less.

Dyar Miller's 1970 contract and letters by KHOU on Scribd

“This is pretty amazing,” said Miller of seeing the letters and contract for the first time. “I can’t remember writing this, but I can remember those days of bargaining over $25 a month. Unbelievable.”

That word could also be used to describe Miller’s playing career. He signed an undrafted free agent as a catcher, switched to pitching and eventually made the majors at age of 29 in 1975, or five years after all this haggling.

“I didn’t have a pitching coach until I made the major leagues,” he said.

Within one of the letters sent to Rochester, Miller writes that he’s been offered a high school coaching job for a lot more money.

“If you’d taken that coaching job, you may not be here today,” Bristol noted.

What a loss that would have been for the Astros.

“He knew exactly what to tell me when I needed to be told,” said Astros pitcher James Hoyt of his experience dealing with Miller while playing at Triple-A Fresno.

“The players love him,” adds Astros manager A.J. Hinch. “But there’s (also) a wealth of knowledge and experience (there). When you combine that with evolving as the game evolves, you have a pretty powerful coach.”

Bristol later gave Miller the folder and all of its contents.

“It is?” Miller replied.

“Yes, I want you to have it,” said Bristol, who’s carried the folder with him from his hometown of Syracuse, New York, to Buffalo, Harrisburg, Pa., and finally, Houston, not knowing he’d ever run into Miller.

How much did Miller end up signing for in 1970?

“Enclosed you will find my 1970 Rochester contract which I have signed for $600 (a month),” Miller read from his letter to Rochester Assistant General Manager Carl Steinfeldt, dated Feb. 28, 1970.

Miller kept reading, “In my opinion, your organization once again, got a tremendous bargain.”

All these years later, one team’s bargain becomes the Astros’ treasure.

And the kicker to this story? Miller didn’t make the Rochester club in 1970. He played for Dallas-Fort Worth that season, instead.