It's usually out with the old and in with the new when it comes to decades old buildings in Houston. 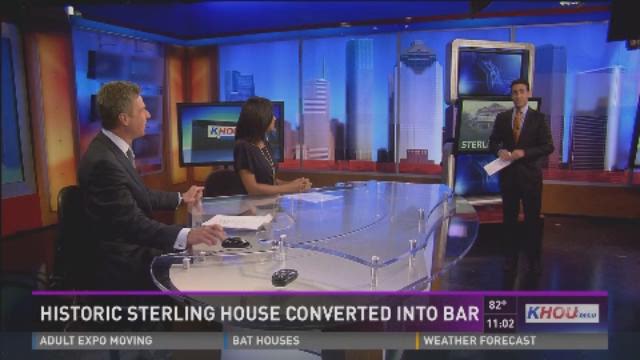 It's usually out with the old and in with the new when it comes to decades old buildings in Houston.

But one business owner has decided to preserve a piece of history in Midtown by turning a historic house into a bar—called Sterling House.

The house dates to the early 1900s and the current owner stumbled upon it back in 2009 when it was dilapidated. Little did he know the home belonged to former Texas Gov. Ross Sterling.

The lore about Gov. Sterling has been passed down to Sterling House owner Amir Ansari.

"From what the family told me, this house enabled them to come live here with no expenses and try their luck in the oil field," said Ansari, who on Wednesday showed us pictures of the family as well as a letter thanking him and his partners for keeping up the family's traditions.

Ansari said he got lucky when he discovered it in 2009

"I just bought it because it was an old house, it looked like animal house," Ansari said. "Everything else in the neighborhood was getting torn down, rebuilt and I just wanted to kind of preserve an ancient building for Houston."

Ansari has tried to preserve what he can, including the porch, which the Sterling family had a story about.

"Their mom used to sleep out there and MD Anderson lived across the street and he had a lot of mistresses and they'd watch him make out with the different girls," Ansari said.

Even Howard Hughes lived in the neighborhood—one in which Ansari and others believe they're perfectly positioned.

"This is not going to be a Midtown bar," said Sterling House bartender Jason Sturgis. "It's going to be something different, something special, more of a family oriented bar."

On Wednesday they were busy putting the last touches on the bar for a soft opening.

One of the drink specialties will be a Sterling Mule.

Gov. Sterling served from a two-year term from 1931-1933. He and his brother Frank founded Humble Oil Company, a predecessor to the modern day Exxon-Mobil.

Ansari says he's now working with the city to try and designate the property as a historic site—hopefully with a plaque in front.

The bar is in Midtown on Bagby Street near Rosalie.