Residents have spent months fighting the plans, because they claim the dump ground is already decreasing property values due to its smell, runoff, and noise. 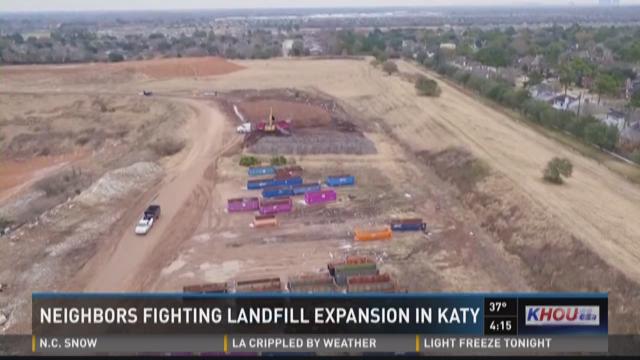 KATY, Texas - Several neighborhoods in Katy are banding together to fight the expansion of a landfill in the area.

The owners of the Greenhouse Road Landfill filed an expansion application with the Texas Commission on Environmental Quality in 2016. It includes plans to expand the boundary of the landfill on Greenhouse Road by more than 31 acres. The elevation would also increase by over 19 feet.

Residents have spent months fighting the plans, because they claim the dump ground is already decreasing property values due to its smell, runoff, and noise.

Gary Brown, a director with the Rolling Green HOA, has been leading the opposition effort. He says he can no longer entertain in his backyard because of the odor.

“How would a guest feel if they come in my backyard and they smell that rotten egg smell? You lose your appetite,” he said. “My goals are to stop the expansion, and have [the owner] operate within the confines of his word and the regulations.”

Harris County Pollution Control Services says they have received 57 complaints against the facility in 2017. All but two complaints were in regards to the odor.

Brown started an online petition against the expansion, which has gotten more than 500 signatures.

“The Greenhouse Road Landfill was originally permit in the mid 1980’s and began accepting waste in the mid 1990’s. For over 20 years this site has provided new development and disaster recovery efforts in the area a place to dispose of C&D waste properly and efficiently. Over the life of the landfill we have worked with the county and developments, to be a good neighbor. This includes our expansion granted in 2000’s as well as the current effort,” he wrote.

In response to concerns about odors, he said, “Construction and Demolition Landfills generally do not generate significant odors, but we are taking the concerns about odors seriously. In September of 2017 the TCEQ issued a Temporary Authorization to the Greenhouse Road Landfill to implement an odor control system. We have been evaluating this system and making modifications to improve its effectiveness. Based on these findings we will file a request with the TCEQ to make the system a part of the current Landfill permit.”

Weiss also responded to drainage concerns at the landfill.

Once a decision is made, adjacent neighbors will be notified and the preliminary decision will be published in a local newspaper. The public will then have 30 days to make comments or request a public meeting for the proposed facility.