If all goes well today, this will be the first time astronauts will blast off from U.S. soil since the space shuttle program ended in 2011. 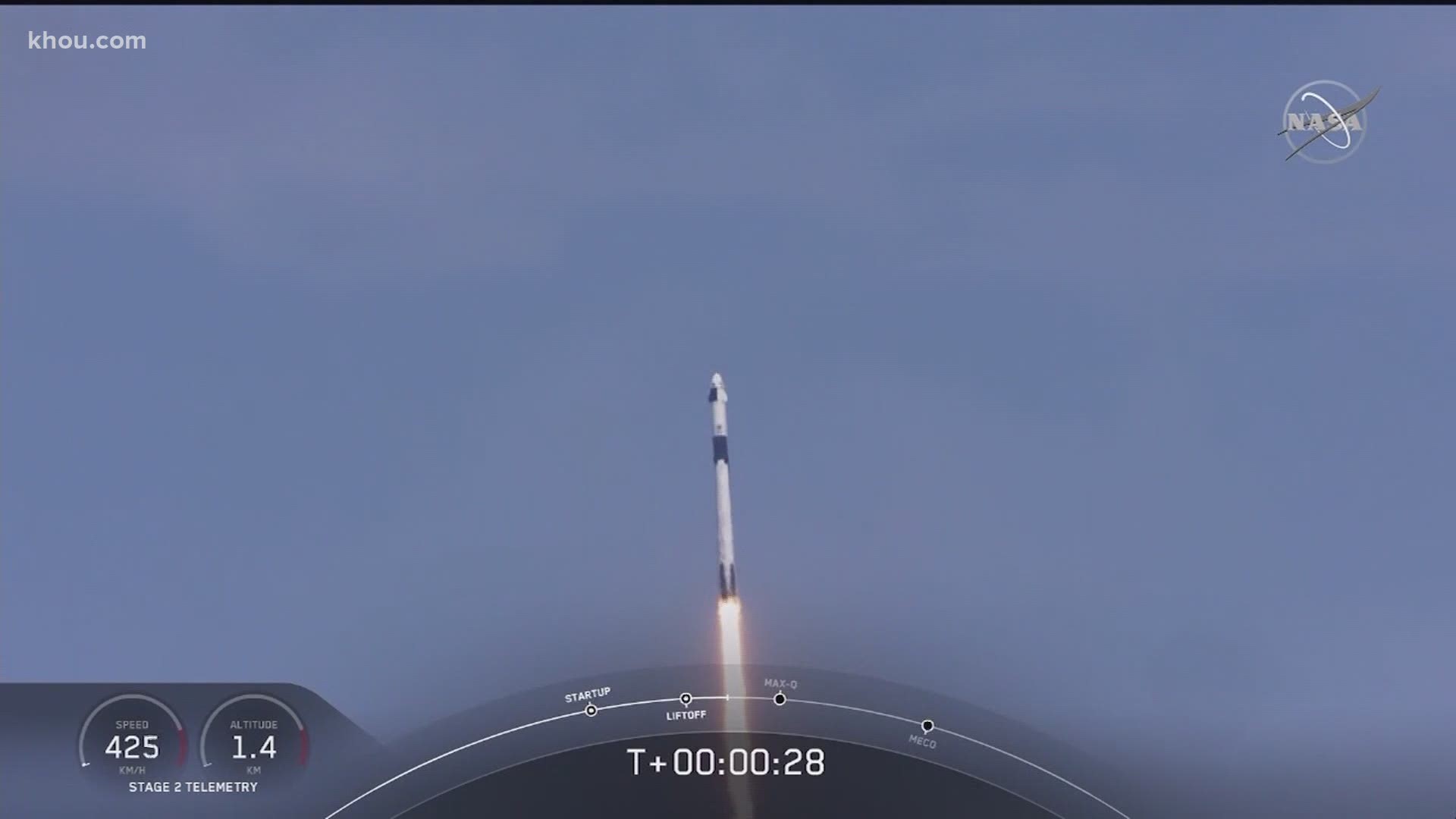 It was the first time astronauts will blast off from U.S. soil since the space shuttle program ended in 2011.

Astronauts Bob Behnken and Doug Hurley have been training for this day for the past several years. Much of that time was spent in Houston at the Johnson Space Center.

How to watch today's historic launch

NASA will provide live coverage of pre-launch and launch activities for the SpaceX test flight beginning at 11 a.m. You can stream the video at the top of this page and on the KHOU 11 News app.

Also, NASA has launched an immersive virtual experience so space fans can still witness all the excitement up close. You'll first want to register for the "Launch America" social event. This will keep you in the know for the day of events, opportunities and how to stream the launch. NASA will communicate with you via email, so be sure to keep an eye on your inbox.

By registering you'll get the chance to interact with NASA Administrator Jim Bridenstine and Kennedy Space Center Director Robert Cabana and ask them questions ahead of the launch.

Space fans can also, take a virtual tour of the launch pad, climb into a mock-up of the Crew Dragon capsule, practice docking to the ISS, train to be an astronaut and print out a mission patch.

2:40 p.m.  -- Houston-based astronauts Bob Behnken and Doug Hurley head toward the International Space Station after successfully entering orbit about 12 minutes after launch. They're expected to reach the ISS at about 1:27 p.m. CST.

2:25 p.m. --  NASA tweets up close photo of SpaceX Falcon 9 breaking through the atmosphere toward space.

11:35 a.m. —  NASA and SpaceX continue to keep a close eye on weather conditions as we approach the big launch.

Forecasters put the odds of acceptable weather conditions Saturday at 50-50, with the outlook improving to 60% favorable on Sunday.

Managers considered bumping the next launch attempt from Saturday to Sunday to take advantage of a slightly better forecast at Kennedy Space Center.  Read more.

10:11 a.m. — All things still a go for liftoff. Weather is still being monitored.

Why does this launch matter?

The last time NASA launched humans into space was in 2011. If this launch is successful, it could pave the way for commercial space travel.

This is the final test flight for SpaceX. It will validate the company’s crew transportation system, including the launch pad, rocket, spacecraft, and operational capabilities.

By encouraging private companies to provide human transportation services to and from low-Earth orbit, NASA can expand its focus on building spacecraft and rockets for deep space exploration missions.

That certification enables NASA to do more research at the ISS, and lays the groundwork for future exploration of the Moon and Mars.

Here is a look at the key moments and times heading into today's historic launch:

6 hours prior to launch – Astronauts will wake up so that their sleep cycles will time up for when they arrive at the International Space Station. They will also eat some breakfast and get some exercise.

4.5 hours prior to launch –  Weather briefings and putting on their “comfort garments,” or space underwear. Then, they will put on their space suits in same room that astronauts have been using since Apollo and make sure they are working properly. Then, they will get in the TESLA cars and head over to the launch pad.

2.5 to 3 hours prior to launch –  The astronauts will take an elevator up to the Dragon spacecraft, where a “closeout crew” will get them sealed in the cockpit.

45 minutes prior to launch – SpaceX protocol has them go through a “poll” to make sure all crew involved in the launch are ready to start fueling the engines/spacecraft. This is the critical point that would be the final call to scrub the launch.

How the weather can delay the launch

Launching a rocket is a delicate dance. And, there's a lot that can stop it. If sustained wind at the 162-foot level of the launch pad is more than 30 miles an hour, it's a no-go.

Same thing is there's wind shear that could cause control problems for the launch vehicle.

If lightning strikes within 10 nautical miles of the pad or flight path, that's an automatic 30-minute delay. A nautical mile is 1.15 regular miles.

Nearby clouds can delay the launch too – especially if they're tied to storms.

It's Florida, so it'll be warm toward the ground, but if NASA sees precipitation and freezing temperatures in the clouds way up high, the launch will be scrapped.

If the rocket is set to go through a cloud layer greater than 4,500 feet thick that extends into freezing temperatures – no go.

Another issue is wildfires. If there's a smoke cloud from fires near the rocket, no launch.

What happens if something goes wrong?

They test for an “abort.” They have plans in case something goes wrong.

They did one of these tests on January 19, 2020 – everything went as planned during that test.

ff something goes wrong with the Falcon 9 rockets, they will engage the Super Draco thrusters, which push spacecraft away from Falcon 9 in case of emergency

Those Super Dracos can accelerate the Dragon capsule 0.5 mile in 7.5 seconds, bringing it to 436 mph from a standstill.

They ran an unmanned crew last year, and have done more than 700 tests on Super Dracos alone.