Mary Pinney was camping with her husband and three children when storms blew into their East Texas campground Saturday night. 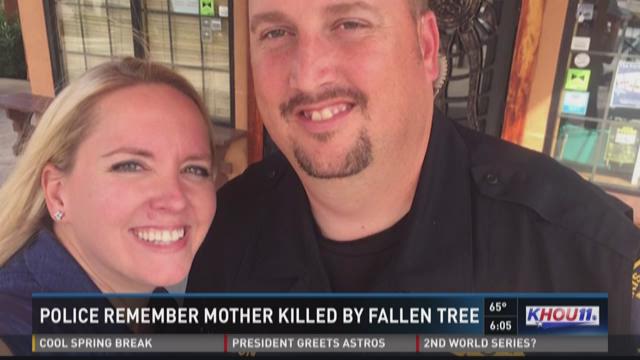 A freak accident in Northeast Texas has left law enforcement in Baytown reeling.

Strong winds knocked down a tree that landed on the tent of a Mt. Belvieu family, killing 40 year old Mary Pinney, and seriously injuring her husband. Their three children, miraculously, were not hurt.

It all started with the loss of their brother, Marcus - a Sugar Land Police Officer.

“We lost him within a two month time period from being diagnosed with cancer," Pinney's brother, Jim L. Zaruba said.

A brother and a sister trying to turn a senseless loss to meaning, Jim and Mary started 'Project Blue' in Marcus’s honor - a non-profit that supports officers who became sick or injured outside the line of duty.

“We did it in my brother’s name, had him to drive us, now we’ve got two of them driving us," Zaruba said.

Speaking to KHOU 11 News over the phone from the hospital in Tyler, Zaruba is now talking about the loss of his second sibling, his final sibling, Mary.

“I miss her terribly," Zaruba said. "Never in my life did I imagine that I would bury both my brother and sister. I'm the oldest. It wasn’t supposed to go that way.”

Mary’s life was taken late Saturday night at a campground in Northeast Texas. Extreme thunderstorms knocked over a large tree that landed on the tent that she and her family were sleeping in.

“What a wonderful, giving servant that she was," Baytown Police Assistant Chief David Alford said.

Alford is a board member for Project Blue. He says Mary’s passion and persistence in helping officers is a loss they’ll never replace.

“It’s her example, the way that she continued to help and give, sacrificially every time," Alford said.

In its eight years, Project Blue has donated over $300,000 dollars to over a hundred officers. It’s an effort that Zaruba now says is not slowing down.

“This is just going to push us to make it that much better and stronger and keep it rolling," Zaruba said.

Mary’s husband, Marc, is still fighting for his life, and has more surgeries to go.

The family says if you want to help, what Mary would want most is for you to donate to Project Blue.