Austin City Council has come to a decision regarding a Major League Soccer stadium in Austin. 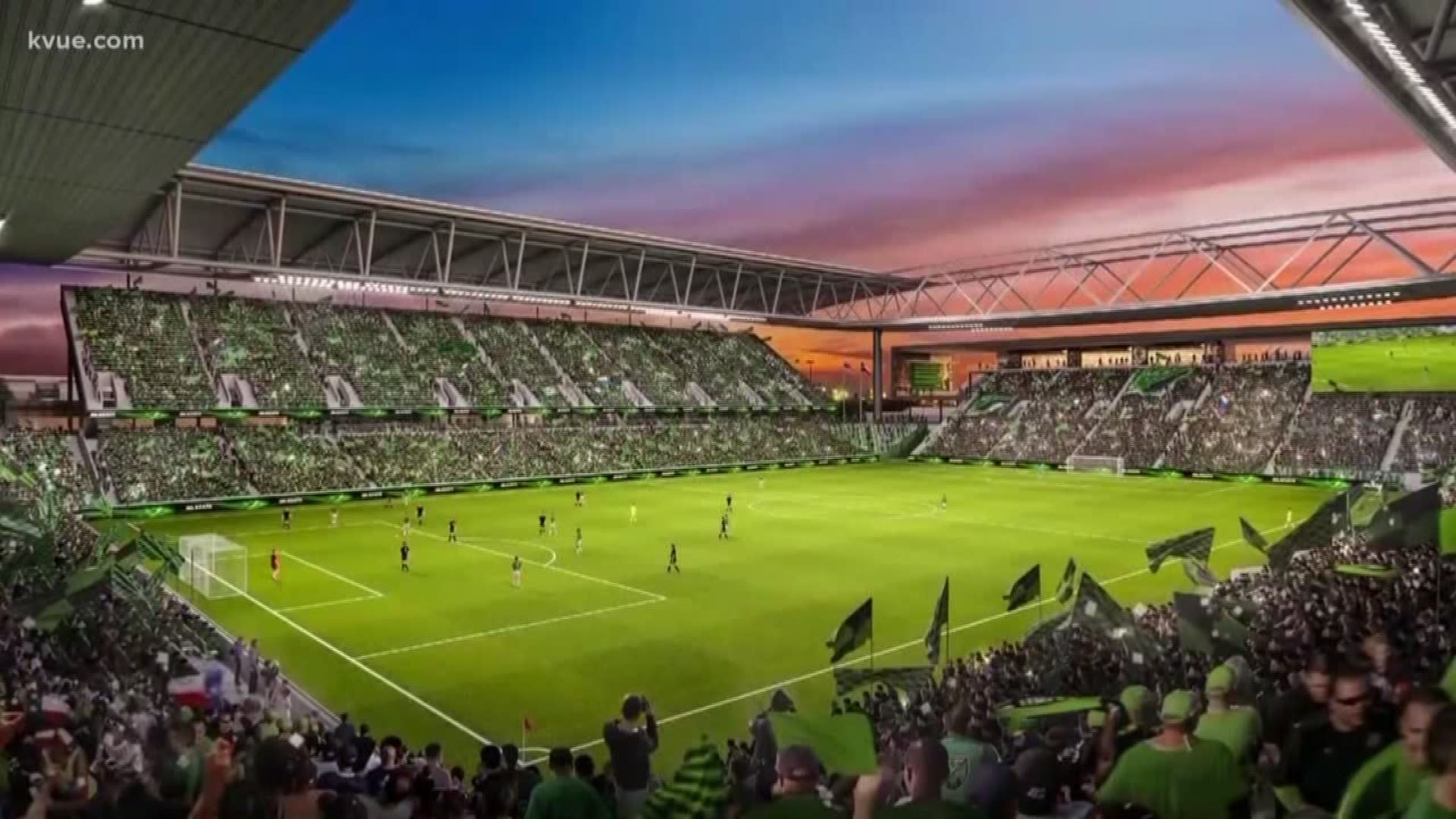 AUSTIN — A Major League Soccer stadium is coming to Austin.

After months of back-and-forth, Austin City Council voted 7-4 Wednesday to bring an MLS stadium to McKalla Place in North Austin.

City council gave the green light to Precourt Sports Ventures to build the stadium at the 24-acre city-owned property near the Domain.

Precourt owns the Columbus Crew soccer team and plans to move from Ohio to Austin.

Anthony Precourt, the owner of PSV, gave a brief statement to reporters saying, "It's been a long, emotional process. We're thrilled to move forward. The work starts now. And we're bringing Major League Soccer to Austin, Texas. So thank you Austin."

PSV said in a statement that reads in part:

"We have been incredibly honored to work alongside the growing community of volunteers, families, and supporters who have proudly persevered to make this historic vote possible.Your efforts have helped make a difference at each step of the pursuit and we wish to thank you very much for your support."

The quartet of council members said there were not enough details in the proposal, Austinites are against it and that there is not enough parking.

However, the other seven members of the council, such as Mayor Steve Adler, had favorable opinions about Major League Soccer coming to Austin.

"There are so many things that are going right in the city," said Adler. "We have some challenges. One of them is that we're one of the -- we're way too segregated as a city. And I think that soccer, Major League Soccer, has the potential to really pull the community together in a common activity."

One of those in the crowd at city hall vocally opposing the deal was Linda Curtis with political action committee Indy Austin.

"This majority council is cowardly," Curtis said. "They didn't want to take a full vote and full review on what is now a massive project on a city-owned asset that involves affordable housing issues."

Curtis said Indy Austin is working on a petition against the stadium and said she is confident they will have enough votes.

Wednesday morning's meeting started with a lot of discussion on the wording of the agreement.

The council also spent a lot of time talking about Amendment 10, which talks about "ancillary development." Mayor Steve Adler asked to add a sentence that talked about the need for a "mutual agreement" if anything ancillary was to be built.

Possible rent increase around the potential stadium in North Austin was also discussed at Wednesday's meeting, as well as providing a secure way for people to access the trails near the area.

Mayor Pro Tem Kathie Tovo headed up many of these discussions, at one point asking everyone to respect the "process" of eventually voting for or against this agreement.

Austin Chamber of Commerce President and CEO Mike Rollins said he is thankful for Precourt Sports Ventures' investment in Austin.

"This is a game changer and major milestone in the history of the Austin region to secure our first major league sports franchise... Though it appeared there was much unpredictability around the process to get to this point, Precourt has demonstrated its commitment to partner with the Austin community, and we thank them for their investment of hundreds of millions of dollars in the area," Rollins said.

Another McKalla Place proposal submitted to Austin and no, it's not for a MLS soccer stadium

MLS soccer stadium in Austin: Where would I park?

The vote comes after the city council received a stadium plan in early June from Precourt Sports Ventures, the owner of the Columbus Crew MLS team.

Since then, the city received five other submissions from developers with alternative plans -- many that didn't include a stadium. The council heard presentations on those five submissions at a special called meeting Aug. 7.

KVUE talked to one of those five organizations.

"This is going to be focused on Austinites for Austinites," said Marcus Whitfield with the Whitfield/Chen Development Team.

Their development was called "McKalla District."

"Our project is specifically oriented for affordable housing," Whitfield said. "As well as interfacing with the local community to include artists, multiple age generation groups, musicians, all-walks-of-life Austinites."

Their development would have seven mid-rise buildings and one high rise. It would have more than 800 affordable units and nearly 200 family-friendly ones, along with 250 senior units.

Whitfield and Chen said they are not against soccer but think there is a greater need for housing.

"This site is probably not ideal for soccer, but it is ideal for what we've put together," said Whitfield.

KVUE spoke with another firm called Land Design Studio and Forge Craft Architecture, who were also planning a mixed-use development.

"As this area of North Austin develops, it's important that we develop in such a way that allows for people to live here and allows for a wide range of Austinites to live here," said Scott Ginder, founder of Forge Craft. "So we think by providing this, we can tend to many different facets of Austin life."

One city council member flew to Columbus, Ohio to visit fans of the Columbus Crew -- the team which Austin would inherit. She wanted to find out how the stadium operates in its city and imagine what that would like in Austin.

"They had a very intentional planning process and they have the infrastructure built that pretty efficiently and effectively moves people in and out of that area, which we don't have," said Leslie Pool, the council member who visited Ohio. "My job, my responsibility, is to the tax payers and residents of the city of Austin. And very clearly to the folks in my district who are very – very adamant in their opposition."

"We can't minimize the direct effect of the traffic and that has a direct impact on the people who live there, and also the air quality," said Pool.