The photo of the quote is already going viral with plenty of people wondering how something so misogynistic could be thought acceptable inside a school. 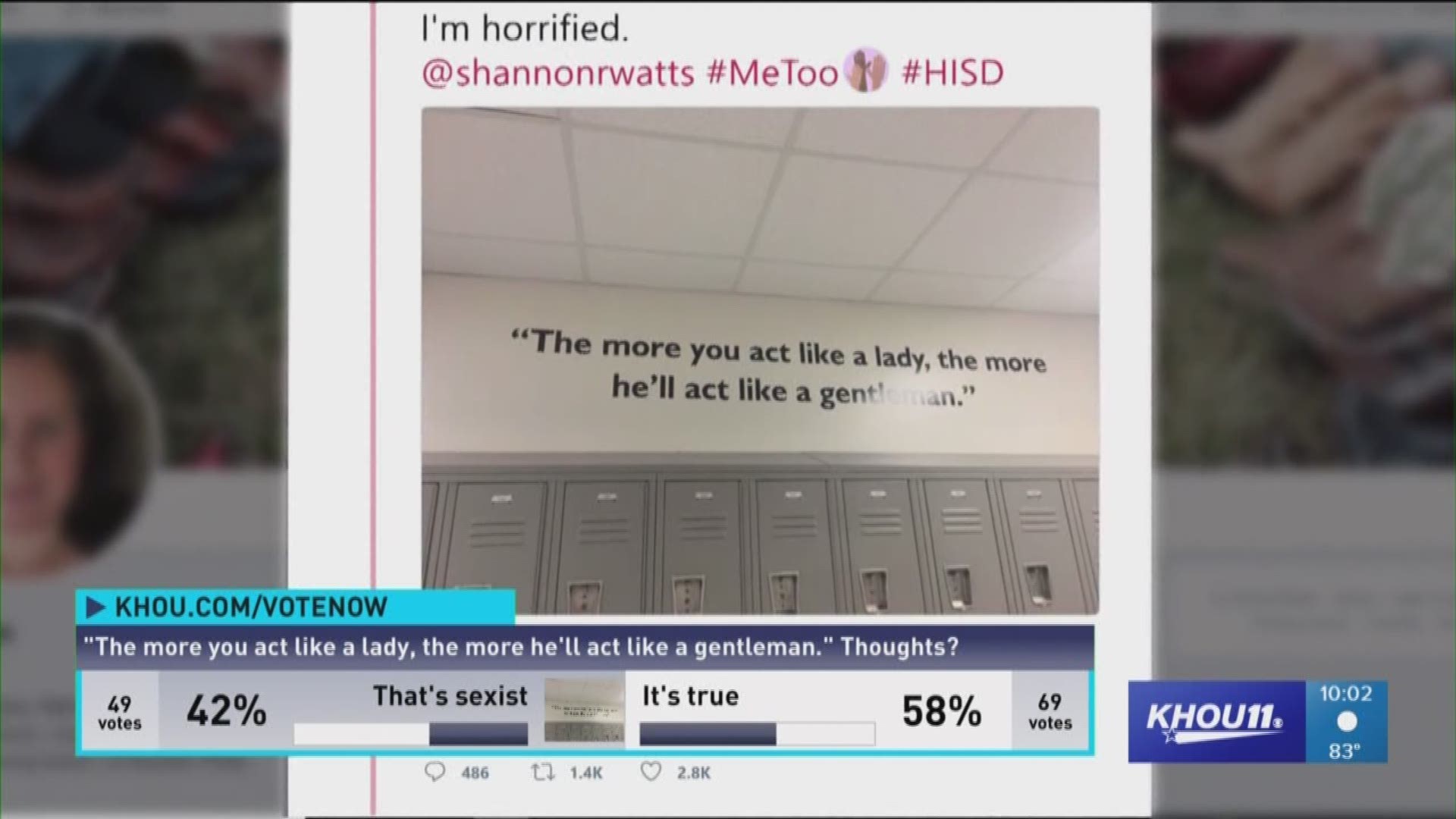 HOUSTON - A quote painted above lockers at a Houston ISD elementary and middle school is drawing major criticism online.

The quote reads, "The more you act like a lady, the more he'll act like a gentleman." It is painted above a set of lockers at Gregory-Lincoln Education Center in the 4th Ward.

This is the wall at Gregory-Lincoln Middle School in Houston ISD.
It's perpetuating horrible gender stereotypes, shaming women, and relinquishing boys of all responsibility. It's sexist, mysogonistic, and discriminatory!

Lisa Beckman posted the photo online Friday afternoon. She told KHOU 11 News her friend originally snapped the photo of the quote and sent it to her.

Beckman shared the photo on Twitter writing, "This is the wall at Gregory-Lincoln Middle School in Houston ISD. It's perpetuating horrible gender stereotypes, shaming women, and relinquishing boys of all responsibility. It's sexist, misogynistic, and discriminatory! I'm horrified."

Beckman said she wrote to the principal of the school and to the school board on Friday.

One HISD teacher who wishes to remain anonymous told KHOU she could not believe the quote is at the school in 2018. She said we need to empower students to stand up for themselves and take responsibility for their own actions.

"To me it meant that girls need to take responsibility, not only for their own actions, but for whatever the boys to us as well and I just didn’t feel like that was an image of the equality and self-determination that, we as a district or myself as a mother, want to portray," the teacher said.

Several Twitter users claimed the quote was photoshopped but Beckman responded saying it was real, tweeting more high resolution shots of the quote.

A couple of hours later, HISD confirmed the photo was in fact real when the district sent a statement to KHOU 11 News Friday afternoon.

“The quote does not align with HISD values, and it will be taken down.” the statement read.

Disturbingly enough, the quote comes from Sydney Biddle Barrows, a business woman who was the owner of an escort agency in New York City.

Barrows became known as the "Mayflower Madam." In October 1984, her escort service was disbanded and she pleaded guilty to promoting prostitution.

A TV movie about Barrows starring Candice Bergen was broadcast in 1987 under the title Mayflower Madam.

One Twitter user was quick to notice the quote and its author and shared the information in the original thread.

Quote from Sydney Biddle Barrows, an American businesswoman who became known as an escort agency owner under the name Sheila Devin; she later became known as the Mayflower Madam. #TheMoreYouKnow

Plenty of people online are upset over the nature of the quote and are concerned with the message it sends to children.

Here. Fixed it for you. pic.twitter.com/QvACYGoGrv

"So remember girls, if he's treating you horribly then you had it coming. Now enjoy class!" - the people who put this up apparently.

Ah yes. Another impossible responsibility to heap on our girls. How about boys behave like gentlemen no matter how another acts towards them? It’s called character.

My kid starts 7th grade next week and I already wanted to keep her home before I saw this.

"I don’t think that’s probably the example, a Madame, that we want to be setting for our children and students and maybe with a little bit more research, we can make a better choices in the future," the teacher said.