Deputies say a man accused of stealing from a Montgomery church has been arrested. 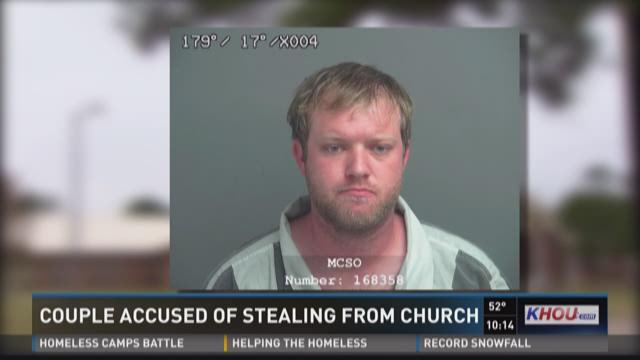 A couple claiming to be victims of Hurricane Harvey is suspected of stealing thousands of dollars in property from a Montgomery church.

Blake Mayon and Naomi Johnston were arrested Thursday, according to sheriff's deputies. Mayon has been charged with theft greater than $2,500.

The couple and their two elementary school-aged children were living in the Dacus Baptist Church after the flood.

Church workers say the family had initially sought emergency shelter at the church, but stayed months longer because they claimed they had no other place to go and had lost all they owned in the flood.

Church members provided the family with food, clothing and money. Mayon was hired to work at the church and was given a Dodge truck by members, sheriff's deputies said.

“We had no idea, none,” said church secretary, Betty Jo Morgan. “[They were] very personable, we loved them. We took them in. We loved their kids. The couple was almost like our kids to us.”

The family disappeared shortly before Christmas.

Some of the property began surfacing at pawn shops, according to sheriff's deputies.

The Montgomery County Sheriff's Office issued an alert for the couple to the media and soon located Mayon outside of a Wall-Mart.

Mayon had some of the church's missing items inside of his truck, according to deputies.

“I don't know what you can learn from this,” Morgan said. “You can't allow yourself to not have a giving heart and not help people. We've helped a lot of people and we've been burned once.”

The church members who spoke with KHOU 11 said they probably would not change the way they assist victims in the future.

“Would we help this family again today if they came back? Probably so,” said Dacus Baptist Church treasurer Delma Talley. “If they came back in a frame of restitution. We would be called as a church to help them out. I mean that's what it's all about.

MONTGOMERY COUNTY, Texas – Deputies are asking for the public's help in locating a man and a woman wanted in connection with a theft at a Montgomery church.

According to the Montgomery County Sheriff's Office, the theft occurred at Dacus Baptist Church located at 5403 N FM 1486.

Upon arrival, deputies learned that the church was used as a shelter for victims of Hurricane Harvey. Two of the victims, Blake Mayon and Naomi Johnston, were living at the church due to the destruction they suffered as a result of Harvey.

The church provided the family with a place to live at the church and keys to the church so they could come and go and have a sense of normalcy.

The church even gave Mayon a job at the church doing odd jobs. The church also purchased a white Dodge truck for him so he could get a job and provide for his family.

During their stay at the church, personnel began noticing tools and other items were missing. Shortly thereafter, the couple disappeared without notice.

Through the course of the investigation, deputies have discovered numerous of the same items stolen from the church were pawned by Mayon.

Deputies are currently looking for Mayon and Johnston and are asking that anyone that knows their whereabouts to contact the Montgomery County Sheriff's Office and refer to case#17A383499.