Now that the situation is officially under control, site personnel can investigate the cause of the leak. 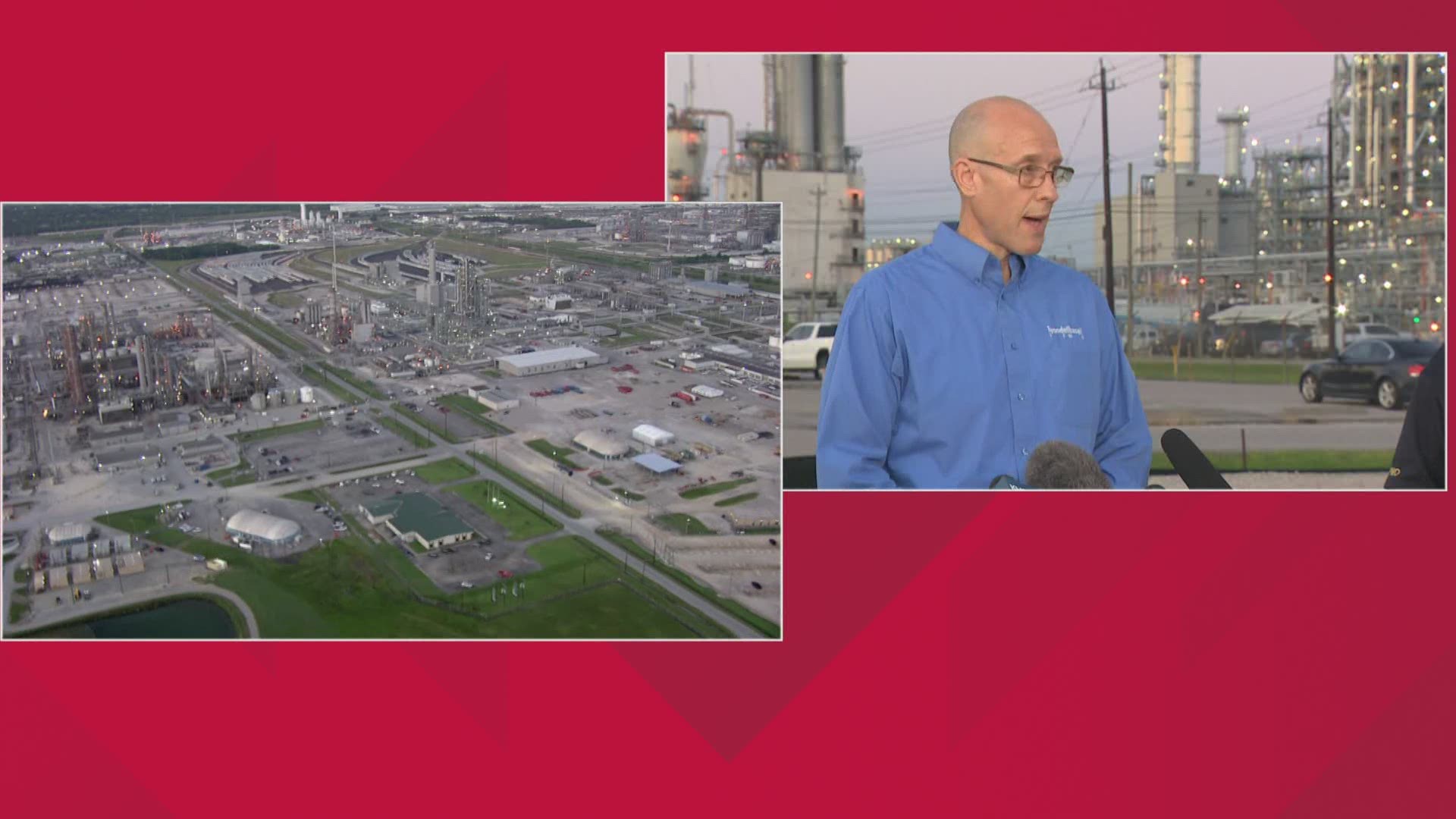 LA PORTE, Texas — An All Clear alarm sounded Wednesday after last night's deadly chemical leak at the LyondellBasell facility in La Porte. Now that the situation is officially under control, the company says site personnel can investigate the cause of the leak.

Officials said the incident left two contractor workers dead and put six others, including five contractors and an employee, in the hospital with burns.

LyondellBasell said Wednesday at least 30 people were injured; a majority of them have been hospitalized after breathing in toxins.

Emergency crews responded to the facility around 7:30 p.m. Tuesday at 1515 Miller Cut-Off Road. They said the leak happened in the acetyls unit of the plant.

The Harris County Fire Marshal's Office said there was a small chemical release that was contained just to the plant. They said the chemicals involved were used to make medical supplies and food-grade vinegar.

The Texas Commission of Environmental Quality described the chemical as a mixture of catalyst, acetic acid, methyl iodide, and hydrogen iodide. LyondellBasell said up to 100,000 pounds of acid was released during the incident.

They say up to 100,000 lbs of acid was released. It has since been contained and resolved. No air quality threat to Public. Still waiting for the cause. @KHOU #KHOU11

La Porte Office of Emergency Management confirmed the leak was contained to the facility, and there is no threat to the surrounding public.

Harris County Pollution Control is at the scene conducting air monitoring. They said the leak has been isolated, and air monitoring at the facility perimeter indicates no offsite impact.

They also said there is no active shelter-in-place order.

#Incident | The La Porte Fire Department and EMS have responded to an incident at Lyondell - La Porte, 1515 Miller Cut-Off Road La Porte, TX 77571. There is no impact to the community expected. More updates will come as needed. Again, no impacts to the community are expected. pic.twitter.com/Y5bQ8l55sP

HCFMO determined there was no explosion nor fire, so the investigation has been turned over to Harris County Pct. 8 Constable.

LyondellBasell released the following statement Wednesday on the deadly incident:

"The LyondellBasell La Porte Complex gave the ‘all clear’ for the incident involving its acetyls unit leak. Our response team acted quickly to isolate and contain the leak. Approximately 100,000 pounds of a mixture which includes acetic acid was released. Cleanup is continuing at this time. Air monitoring conducted during the incident did not indicate actionable levels and monitoring is ongoing.

The Occupational Safety and Health Administration, Texas Commission on Environmental Quality, the Environmental Protection Agency, and the Chemical Safety Board were all notified of the incident. A thorough investigation into the cause of the incident is underway, and we are cooperating fully with authorities.

We deeply regret this incident occurred. Two contractors were fatally injured and 30 workers, who were potentially impacted, were transported to local hospitals for evaluation and treatment. Twenty-four of the individuals were treated and released. We continue to monitor their conditions. We are keeping the families of the injured in our thoughts, and our prayers go out to their families.

The safety of our workforce and the communities where we operate are our priority. We want to understand what happened and why, so learnings from this can be applied throughout our company to help prevent a similar incident from happening again.