A new DNA test proved Lydell Grant was wrongly convicted of a 2010 murder while pointing police to a new suspected killer. 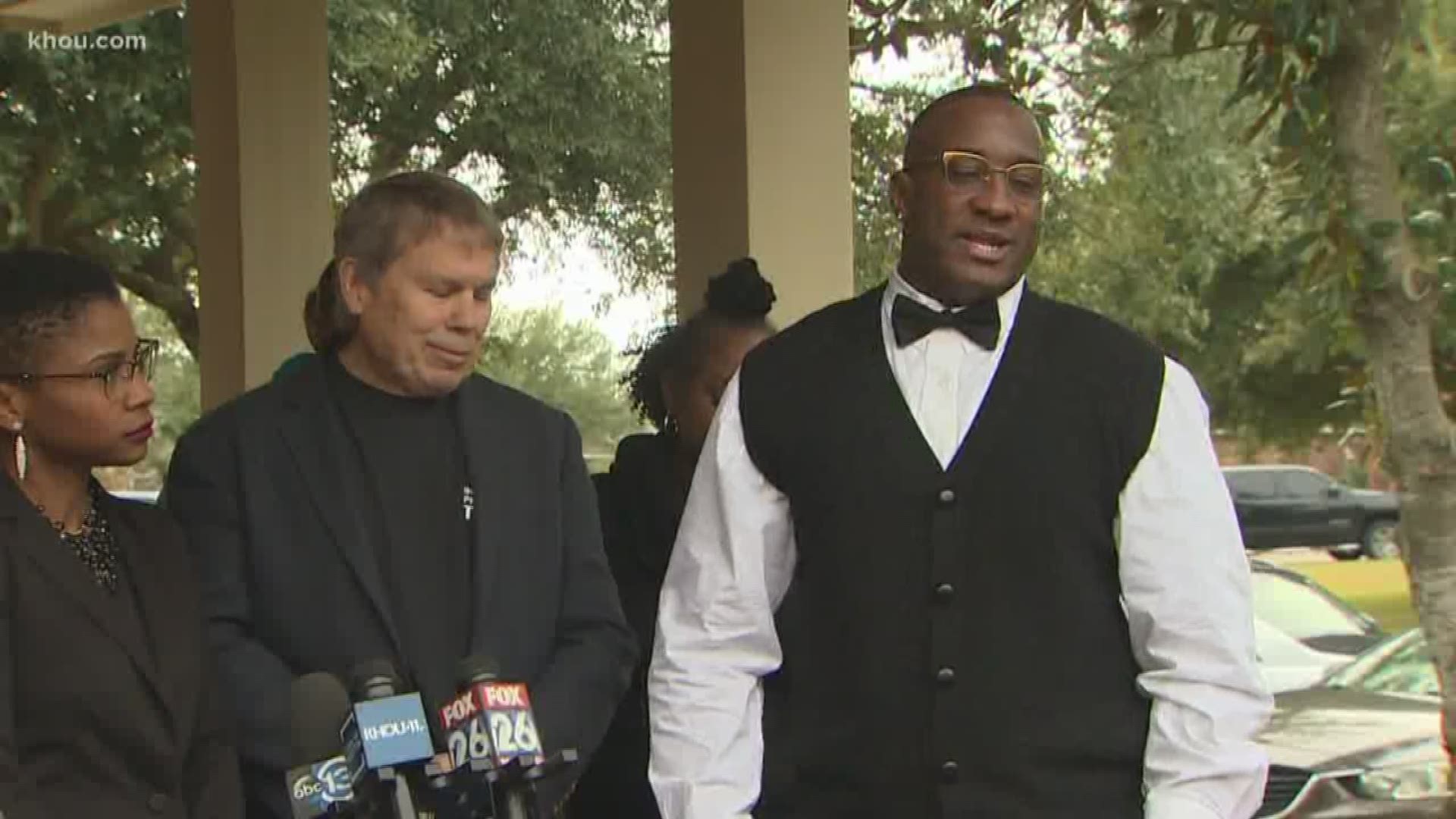 HOUSTON — "Never give up," said Lydell Grant as he stood on the front porch of his family's Bear Creek home.

Those three words fueled Grant and his family for nearly a decade.

Even more of Grant's prayers could be answered seven years after he was convicted for a murder he said he didn’t commit.

“The highest responsibility of a prosecutor is to see that justice is done and insuring that we have the correct individual charged is a baseline responsibility,” Ogg said in a statement Friday.

According to court records, 41-year old Carter has a lengthy criminal history and Houston police detectives learned Carter had been in Houston and the vicinity of the murder when Scheerhoorn was stabbed to death in front of a Montrose neighborhood establishment.  With the help of law enforcement agencies in Georgia, HPD has been searching for the new suspect for months, ultimately locating him and taking him into custody. As of Saturday evening, Carter was not shown to be booked into the Harris County jail.

Scheerhoorn, 28, was killed outside Club Blur in Montrose on December 10, 2010. Authorities said Scheerhoorn ran to a bouncer outside the club after he was attacked and pleaded to get inside. The bouncer, however, refused and Scheerhoorn ran to an adjacent parking lot where he was stabbed multiple times. He later died at Ben Taub General Hospital.

Witnesses outside the club said the killer coldly stared them down.

Grant was arrested five days later during a traffic stop for driving on a suspended license. Police said he matched the description of the killer offered by a Crime Stoppers tip. Six eyewitnesses later pointed Grant out in a photo lineup. During trial, prosecutors pointed to a ski mask, Halloween mask and a wig found in the trunk of his car.

He was convicted of Scheerhoorn’s murder in December 2012 and sentenced to life in prison.

"So I knew, right when they said, we sentence you to life in prison, you know what I did? I smiled. And I turned around to my mother. And mama, would you tell the people what I told you," asked Grant.

From prison, Grant worked to overturn his conviction.

Mike Ware, Grant’s attorney and executive director of the Innocence Project of Texas, said newly tested DNA proved Grant wasn’t the killer. The DNA was uploaded to a national DNA database known as CODIS, or the Combined DNA Index System, which pointed to Carter.

Grant walked out of the Harris County Jail on Nov. 26 surrounded by his family, friends and attorneys. He held his mom's hand and raised it in the air.

“I feel rejuvenated. I feel free now. It was a long time coming; I always claimed my innocence,” he said. "I just thank God that I get to spend time with my family, I thank my attorneys, I thank God. I’ve got to keep saying that. I thank God. I thank God.”

Ware wasn’t immediately available for comment Friday night, but said in a statement released by the DA’s office, “We are relieved that Lydell’s wrongful conviction has had this important breakthrough. We look forward to his full exoneration at the Texas Court of Criminal Appeals.”

Though the DA’s office has charged Carter, Grant must go through the proper legal process to receive his exoneration. Until then, he’ll remain on bond until the Court of Criminal Appeals rules on his case. His case must go back before Powell in district court and the judge will make a recommendation to the Court of Criminal Appeals about his exoneration. That court will then ultimately rule on his case. There’s no timetable for how long the process could take.

But as long as Grant is out of prison, his family is happy.

"I feel real complete that my son is here," said mother Donna Poe. "I have all my kids. And we get to enjoy all the holidays."

As Powell told him at his bond hearing in November, "Even a 100 percent innocent person can still be incarcerated for violating bond."

“We look forward to presenting this new evidence in court and obtaining justice for Scheerhoorn’s family,” Ogg said. “We will begin the exoneration process for Lydell Grant immediately.”

Grant says he has a construction job waiting but he needs a car. His family as set up this GoFundMe page in hopes of a donation.

"I'm ready to move on and move forward with my life," said Grant. "My future is so bright, it's blinding me. I really believe that my story will be able to help someone else's story."