Lydell Grant was sentenced to life in prison in 2012 for the murder of Aaron Scheerhoorn. His defense team points to newly tested DNA evidence that exonerates him. 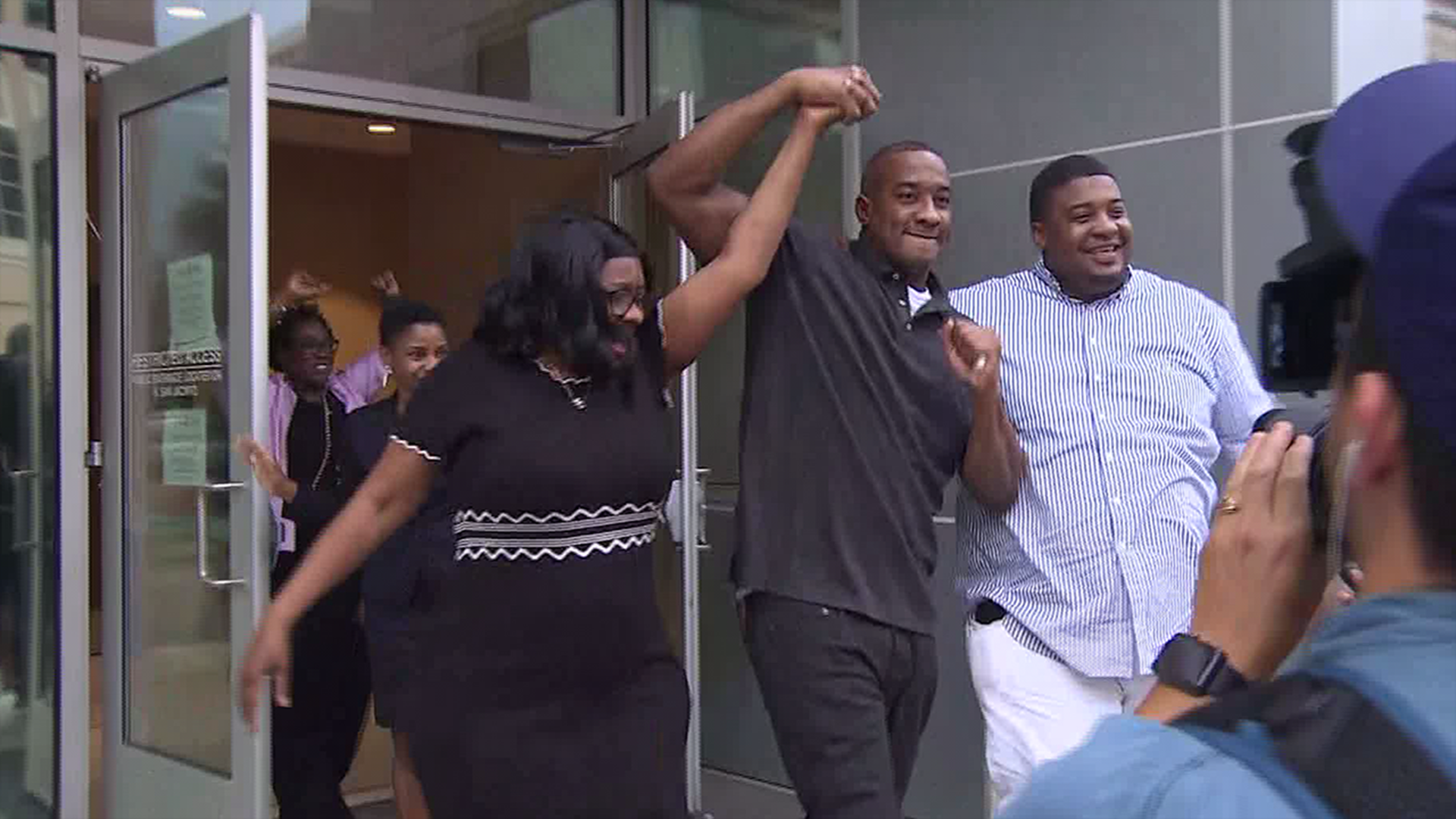 HOUSTON — Surrounded by his family and defense attorneys, Lydell Grant walked out of the Harris County Jail on bond Tuesday afternoon, nearly seven years after he was convicted of killing a man outside a Montrose bar.

Grant’s attorneys say that newly tested DNA evidence exonerates him of the crime and points to another suspect.

“I feel rejuvenated. I feel free now. It was a long time coming; I always claimed my innocence,” Grant said after he walked out of the Harris County Jail wearing a black polo shirt and black jeans. He held his mother’s hand in the air as his brother stood beside him pointing a finger to the sky. “I just thank God that I get to spend time with my family, I thank my attorneys, I thank God. I’ve got to keep saying that. I thank God. I thank God.”

Grant, 42, appeared before Judge George Powell in 351st State District Court this morning in an orange jumpsuit with his hands in shackled behind his back. Powell set his bail at $100,000 with conditions that he must wear an ankle and GPS monitor, he can’t leave Harris County without the court’s permission and he must not use any drugs or alcohol.

Powell also stressed how much work was done to come to a bail agreement and that Grant must not commit any criminal violations while out on bail.

“Even a 100% innocent person can still be incarcerated for violating bond,” Powell told him.

Grant, standing before the judge with a shaved head and glasses, thanked the judge, the prosecutors and his defense team for their hard work. He then turned and faced his family in the courtroom gallery, who cheered.

“Thank you for showing up,” he told them as he was escorted out of the courtroom.

“We love you, Lydell,” his mother said.

Outside the courtroom and surrounded by family after his bond hearing, his mother, Donna Poe, told a group of reporters that she dreamed of this day since his arrest in December 2010.

“I’m so thankful that the good Lord brought him home,” she said. “It’s going to be super wonderful to have all my kids will me.”

His attorney Mike Ware with the Innocence Project of Texas called it a good day.

“It’s a very positive step in the right direction but we do have a long way to go on this case and we don’t want to lose track of that,” Ware said. “We anticipate that the evidence is going to justify overwhelmingly that he should be exonerated of this crime that he was wrongfully convicted of.”

Grant was convicted of killing 28-year-old Aaron Scheerhoorn (pictured below) in a parking lot outside of Club Blur on Dec. 10, 2010, in a stabbing that was witnessed by dozens.

Five days later, Grant was arrested during a traffic stop for driving on a suspended license. A Crime Stoppers tip led police to zero in on him as a suspect. Six eyewitnesses from outside the club picked Grant’s photo out of a lineup. He was convicted in December 2012 based on that eyewitness testimony and sentenced to life in prison.

Grant filed an appeal immediately after his conviction and has continued to fight it ever since, working, at times, as his own lawyer from prison.

His appeal was aided by a state law that allows people convicted of a crime to request DNA testing on evidence that could contain biological material.

His request was approved in 2018, including testing DNA found under Scheerhoorn’s fingernails.

That testing showed none of Grant’s DNA was found on Scheerhoorn, according to his defense attorneys, and the DNA found under Scheerhoorn’s fingernails pointed to another man.

That DNA was uploaded to a national DNA database, known as CODIS, which identified a suspect who’s been involved in other stabbings, according to Ware.

Ware said he’s been involved in numerous exonerations throughout his career and has seen a common thread through many of them.

Alonzo Poe, Lydell’s brother, gleamed with excitement outside the courtroom next to his mother and family. He said although he’s happy for Grant to get out of jail, the real fight is that Grant is exonerated.

“It was a victory to get him out on bond, and we anticipate getting him exonerated. We want justice to be served,” Alonzo Poe said. “Not only for him to get out, but that family to find the killer because this is just not right.”

Donna Poe said she, too, wants justice for Scheerhoorn’s family.

“My heart goes out to the victim’s family because the mother should know the real truth,” she said.

The Harris County District Attorney’s Office agreed to Grant’s release on bail as its conviction integrity unit continues to investigate the case.

“We will go where the evidence leads us,” said John Donnelly, spokesperson for the Harris County District Attorney’s Office.

Grant was released just before 4:20 p.m.

His plans? Get his favorite food: mom’s peach cobbler and beef enchiladas.