The company's Crosby plant flooded during Hurricane Harvey, causing 350,000 pounds of a hazardous chemical to ignite 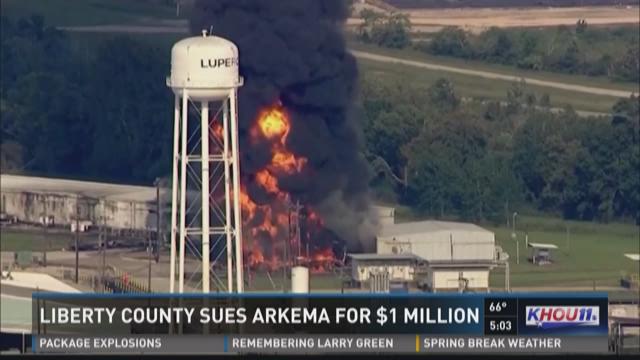 Liberty County has filed a million-dollar lawsuit against the Arkema chemical plant in Crosby.

It was the site of chemical explosions and fires after the plant was flooded by Hurricane Harvey.

Muhammad Aziz is one of the attorneys representing Liberty County.

“We found out there was a cloud of toxic smoke that went into the county, Liberty County. There are still ongoing issues people are having there from contamination from this event,” Aziz said.

Arkema executives have repeatedly said no one could have predicted the flooding that inundated the plant last August.

Read more: Inside the confusion and contradictions surrounding the Arkema chemical explosion

Water knocked out power to warehouses used to store 350,000 pounds of hazardous organic peroxides, which must be kept cold. Backup generators raised two feet off the ground and refrigeration units on trailers all flooded.

When all plans failed, the company was forced to send out warnings that explosions were inevitable.

The Liberty County lawsuit demands the company clean up any contaminants still in the area, which includes checking for contamination in well water. The county also urges the state to fine the company for any environmental rules that were violated.

“They should have, number one, told all the local law enforcement of the dangers of the chemicals. Two, all they had do was put the generators at a height where the water could not have reached them, which is standard. Arkema is not the victim in this. Unfortunately, the first responders, the residents and ultimately the taxpayers are the victims,” Aziz said.

“Liberty County’s lawsuit unfairly accuses Arkema and its employees of wrongdoing and contains misinformation that could unnecessarily alarm residents. The County and its residents could not have been seriously injured by Arkema’s releases because all monitoring and testing results show no exceedances of Texas residential environmental standards in soil, surface water, ash or drinking water occurred at off-site properties. As everyone knows, including the people who filed this lawsuit, this was an extraordinary flooding event with unforeseeable consequences. Arkema was not at fault for these releases. No one – including the National Weather Service or the National Hurricane Center - predicted the record-breaking levels of rainfall that overwhelmed the multiple layers of back-up power and protections we had at our Crosby facility. Filing lawsuits is not the solution here. Arkema and its employees, like other businesses and individuals in Liberty County, suffered from this storm and we need to remain focused on recovery. Arkema will continue to cooperate with authorities, but we will strenuously defend against any and all unfounded claims.”

Harris County announced a similar lawsuit against Arkema in November.

Aziz is also representing 124 residents and first responders in a federal class action lawsuit against Arkema.