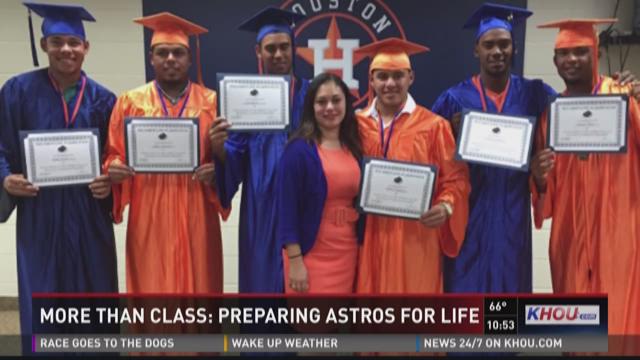 It’s a program which has helped nearly every Spanish-speaking player the Astros have; from Jose Altuve to Francis Martes and beyond.

Out on the field, its sliders, swings and strategy. But inside one building at FITTEAM Ballpark of the Palm Beaches, its nouns, verbs and prepositions.

That’s where Doris Gonzalez comes in, helping these young Astros from Spanish-speaking countries learn English. “We are teaching them language, but we’re also teaching them to be able to be successful in the outside world; and overall be better people and better men,” she said.

For her, watching players someday make the majors is a huge thrill. But equally as important, seeing one of her students wear a different kind of blue and orange.

Doris’ title is supervisor, but she’s more like ‘Mom.”

Still, before we see ‘what’ the players do, here’s ‘why’ they’re doing it.

“The more confidence you have, the more you can contribute to the organization,” said Armando Velasco, Houston’s director of Minor League operations. “If you have a player who’s walking around the complex, who feels like he can’t really interact with others and is shy about his abilities, then you’re not going to get the best out of him.”

Therefore, players fine-tune their English in this room; through on-line software, adding to what they’re learning in a classroom. The software features four levels of proficiency.

Class A pitcher Enoli Paredes is so eager to learn, he asked to do an interview with KHOU’s Jason Bristol and photojournalist Sergio Soto.

One, for practice and two, we think, to impress his teacher.

Doris first meets and evaluates players when they sign at the age of 16. “Some of our guys turn out to be illiterate or low-level in Spanish,” she notes.

Low literate in Spanish? “Yes, that does happen.”

Ultimately, through books; reading with kids in minor league cities; and trips to Walmart, players build their language and life skills and develop into prospects like Randy Cesar, who knew no English seven years ago and is now in big league camp.

And the blue and orange outfits Doris can’t wait to see her students wear? A cap and gown.

The program includes a graduation ceremony. “It’s the most amazing time,” she said. “I think I’ve cried the past two times.

“Also, players who have been released, I have (received) letters from Panama or New York and they’ve said, ‘I have a better job now because of what the teacher did for me. Thank you.’

“That’s an amazing reward. Just hearing them realize that this helped them in their life.”