Catholic school invites for blessing, homeless man who lost parts of his feet

Jay Mitchell suffered frostbite after staying with his dog, rather than entering a shelter 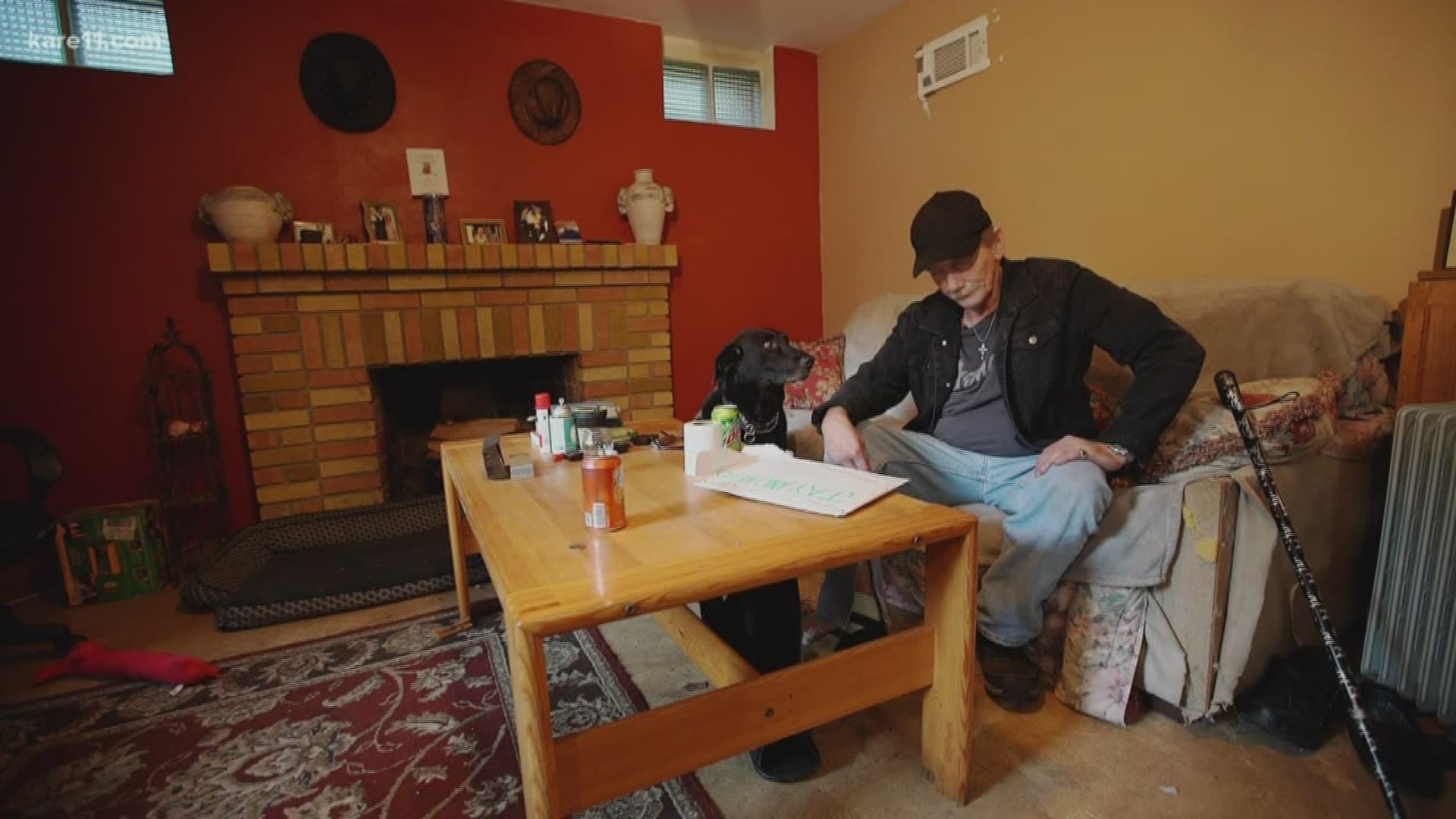 Credit: Chad Nelson, KARE
Jay Mitchell holds one of the cards sent to him 5th-graders at Visitation School.

“Jay, we are praying you,” he reads aloud from a hand-made card, one of several Jay's pulled from a large envelope that now rests on a coffee table in his small basement apartment.

“I was in a really dark place,” Jay says. “I didn't have hope. Their hope is what got me through.”

"We saw the story and we really felt like he needed some support,” student Charlie Meisterling says.

The report the students watched aired on KARE 11 last winter.  It showed Jay in the hospital, where he would spend the next few weeks.

Homeless, Jay had opted to sleep in his pick-up on a 30-below night, rather than enter a shelter without his dog, Hero.

“He’s all I had,” Jay says of the friendly Labrador.

Hero was all Jay had, after losing in quick succession his construction job to a bad hip, his wife Kathy to cancer and his home to eviction.

“I'm so lost without her,” Jay says, fighting back tears, as Hero sits next to him on the couch.  “After losing my wife, I just couldn’t lose him.”

Yet the losses only mounted that cold night in the truck.  Jay suffered frostbite that would cost him all his toes and parts of both feet.

“That's what frostbite does,” Jay says, as he pulls back his sock to reveal the carnage.

Luke Mechtel was among the Visitation students touched by the story.

“He risked his life and everything he had just for his dog, because it was the one thing special to him,” Luke says.

“Thank you for showing me that fear can't get in the way of passion,” one of them wrote to Jay.

“Not even amputated limbs can stop you from making a difference,” wrote another.

“As a teacher we talk about kindness, we study it, we read about it,” Wright says. “I think these kids really took that and ran with it.”

Jay says the cards arrived when he most needed them.

“We all need a recharge, every human being if they're going through a traumatic, tough time,” Jay says. “And I didn't know where mine was going to come from, and the Lord did it through a fifth-grade class.”

Out of the hospital and back in permanent housing, Jay called Visitation wanting to stop by to say thank you to the students who wrote him. The school responded with the perfect date.

“St. Francis was the patron saint of animals,” Mr. Wright says. “And October 4th is his day.”

It’s the day visitation students bring their pets to school to be blessed.  This year, they are also welcomed Jay Mitchell and Hero.

“By the intercession of St. Francis of Assisi may you be delivered from all harm,” Father Pavlak said to Hero as the students bow their heads.

“He loves kids, you can pet him,” Jay told the students.

1 / 9
Chad Nelson, KARE
Jay Mitchell holds one of the cards sent to him 5th-graders at Visitation School.