The message in a recently mailed Gold’s Gym ad is clear: stop childhood obesity. However, a Kingwood mom worries it might do more harm than good. 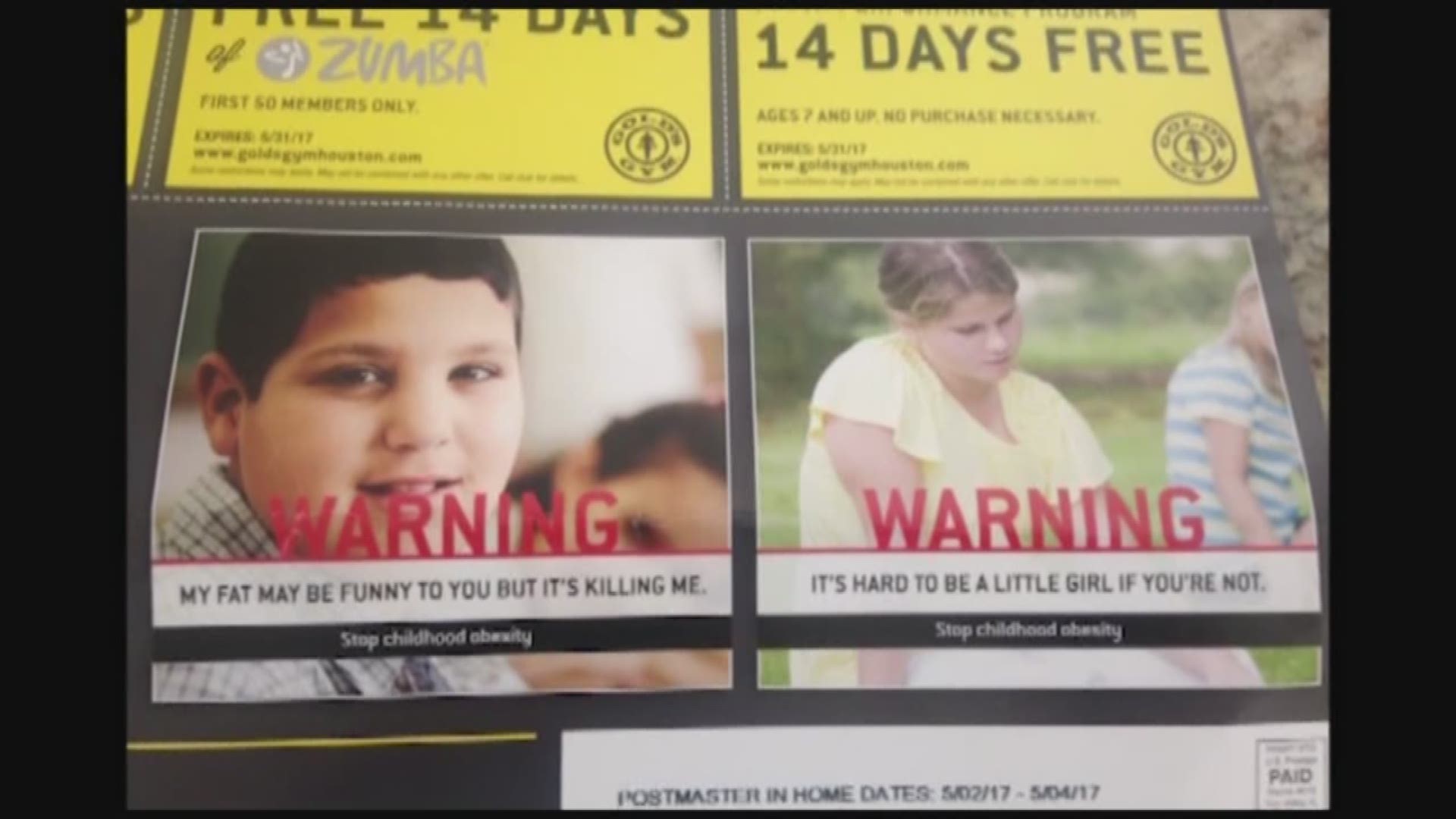 KINGWOOD, Texas - The message in a recently mailed Gold’s Gym ad is clear: stop childhood obesity. However, a Kingwood mom worries it might do more harm than good.

“I just thought, ‘What if a teenager sees this?’ That would be really hurtful to see a message like that,” says Marcy Young. “I think there are a lot more positive ways to get our kids.”

The ad features two pictures. One includes a young boy and a caption that reads “My fat may be funny to you but it’s killing me.” Next to it is a photo of a girl. The caption: “It’s hard to be a little girl if you’re not.”

“I saw it and thought, ‘That seems like a really odd message,” Young says.

Toni Galata, a board member with Houston-based Body Love 4 All, says the message isn’t just odd; it can be harmful for kids.

“They see a kid who looks like them in the ad and that kid’s being shamed, they begin to start feeling shame and anger toward their bodies,” Galata says. “That’s a life-long mental health issue for a lot of adults. We’re starting them on it younger and younger.”

Body Love 4 All is about to launch a free online class for parents called “How to raise body-positive kids.” Sign up for email alerts about it here.

Galata adds that studies have shown that the onset age for anorexia keeps getting younger. It’s now between 9 and 12 years old.

“We’re getting 9-, 10- and 11-year-old kids already feeling that their bodies are so worthless or not good enough that they’re actually starving themselves sick,” she says. “At 10 years old, you should be worried about math homework and playing with your friends and sleepovers, not counting calories or your waist size.”

Young posted a photo of the ad on Facebook, which got a response from the gym’s owner, T. Bryan Murphy.

“He took total ownership of it, like a good company should. He apologized,” Young says. “He said he totally did not mean to offend anyone and he was very sorry about that.”

Murphy’s statement said, in part, “As a father and a person who is deeply committed to children’s health and wellness, I was devastated to learn that some people saw my ad as an attempt at body shaming. …. Reflecting on your remarks helps me to realize that there are more positive ways to communicate my commitment about the programs we offer. Moving forward, I will be more thoughtful as to how we seek to move our message.”

Young says she appreciates that Murphy took the time to respond to her concerns.

“He made me feel better about the message that they’re going to send out in the future, try to have a more positive message for our kids,” she says.

We agree that fat-shaming children -- or anyone -- is wrong. At Gold's Gym, we strive to provide a supportive, motivating environment that helps people feel healthy and strong. Our local Houston gym owner has worked for years to help kids live active, healthier lifestyles and more than 11,000 Houston-area kids have participated in his Youth Performance Program. While we don’t condone the wording or images of his mailer, we recognize his commitment to area kids, and are working to help him frame his message in a positive way that reflects Gold’s values. We apologize to our members and everyone who was offended by this ad.