Keeping the faith with 'Painted Churches of Texas'

The Painted Churches take visitors back to different era, when German and Czech immigrants first arrived in in this country. 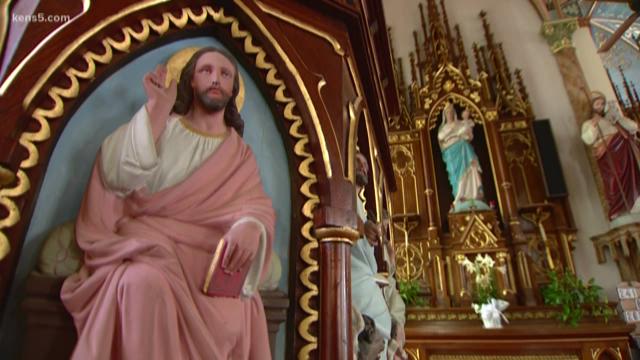 Just a little more than an hour away from San Antonio are some of the most beautiful churches in America. The Painted Churches take visitors back to different era, when German and Czech immigrants first arrived in in this country. Now, the descendants of those immigrants are preserving the art and sacredness of these Texas churches.

Every Sunday in small churches in Central Texas, the faithful raise their voices in worship alongside descendants of the immigrants, who more than 100 years ago built the Painted Churches of Texas

"There's just something holy about how beautiful it is in here," said tourist Michael McDowell.

Soaring gothic arches leading to blue skies, with delicately painted vines and flowers. The work of German and Czech immigrants who came to this rough land in the mid 1800's.

Now their great grandchildren are preserving their ancestors’ history and art.

"And when the tourists step in, they'll go ooh and they'll gasp because it's so beautiful," said Painted Churches docent Shron Rankin.

"It amazes me every day that you can find something this beautiful in the middle of nowhere, " said Painted Churches docent Nina Howard.

There are six painted churches in the Schulenburg area. St Mary's Catholic Church in High Hill is called the Queen of the the Painted Churches, considered one of the most beautiful churches in America.”

"You have to be affected by it every time you walk in. To me, it's like a Faberge egg. It's just exquisite," said Painted Churches docent Wanda Stanzel.

"When the immigrants immigrated to this area they wanted to recreate the beauty of the churches they left behind in Europe," said Howard.

To make the new churches more like the ones they left, the immigrants used a profusion of color and faux finishes to create what didn't exist.

"We didn't have marble in the state of Texas so they actually created it with turkey feathers, marbling on all the pillars," Howard explained.

On the walls, scripture is written in the settlers’ native tongue and it has been restored.

By the busload, tourists from across the state and from around the world visit these churches.

"The tour has, so far, been just astounding and impactful in its beauty and it's serenity. These are testimonies to people who had something that they needed to get out and share," said Tracie Schilling, a tourist visiting the churches for the first time.

In Praha, Czechs built St. Mary's, the oldest of the painted churches. The paint on the ceiling is the original from 1895.

Looking at the ceiling is like a glimpse into heaven, complete with hand-painted angels.

"He painted flowers that were from Texas and it looks like the Garden of Eden with Texas flowers," said Stanzel.

St. Cyril and Methodius was finished in 1911 in Dubina.

Fayette county Judge Ed Janecka grew up in Dubina – in the church his Czech ancestors built. But it was missing its splendor.

For whatever reason, they painted over everything you see today. As a young altar boy I would kneel right there and the sun would come through and you could see the stenciling though the paint, " Said Janecka.

The church was white-washed throughout. In the 1950's, the brilliant blue ceiling with shining stars, along with all the other delicate artwork disappeared from St. Cyril and Methodius.

In 1983, Janecka led the effort to restore the church his great grandfather helped build.

“And we set up scaffolding and I knew there were angels above each pillar and it was like an archaeological find. You use a little paint remover here and there," said Janecka.

The angels were then carefully recreated. Using original stencils, they brought back the church’s colorful history.

"This is for the next generation and the generation after that, I mean, at least people can see, you know, what our forefathers did," said Janecka.

Beyond the beauty and the art, many believe the churches hold heartfelt intentions of generations.
Father Wayne Flagg is pastor of St. Cyril and Methodius.

“I think the older a building is, a place of worship, it somehow carries with it all the prayers and faith of the people who went before it," said Fr. Flagg.

They are small sacred spaces inspiring awe for more than 100 years. Lovingly crafted by immigrants who longed for the comfort of home and the familiarity of faith. The painted churches of Central Texas are treasures for the ages.

For more information on the Painted churches of Texas and tours available, contact the Schulenburg Chamber of Commerce or visit their website.