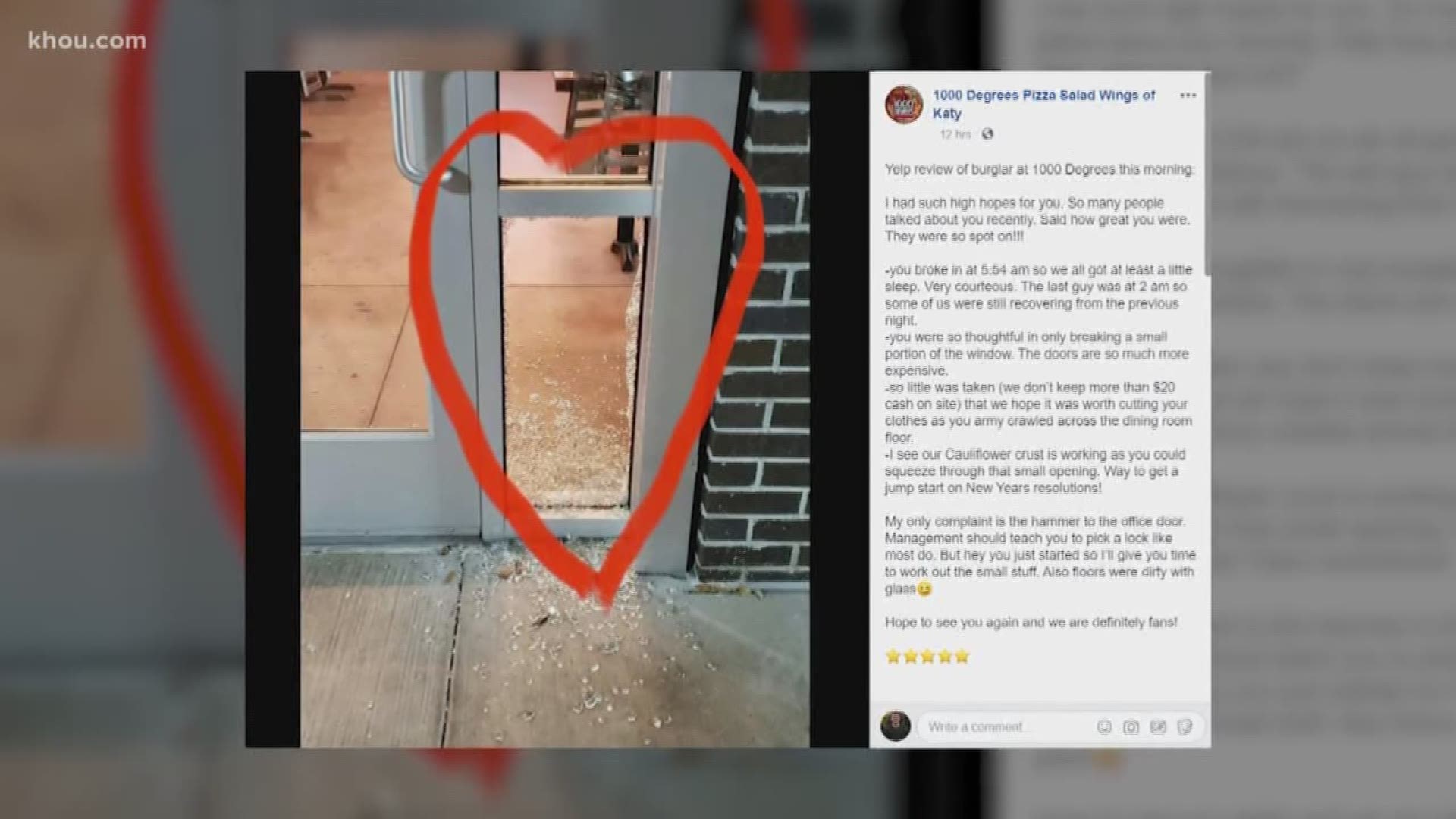 KATY, Texas — The owner of a pizza shop delivered revenge on a burglar caught on camera damaging the restaurant in Katy.

John Bock thought a foodie-style review would be funny but it scored him more than laughs.

Surveillance video from inside 1000 Degrees Neapolitan Pizzeria showed a man in black clothes and white sneakers exit a car, smash one window with a sledgehammer, squeeze through the small opening, crawl around the restaurant then steal cash around 6 a.m. Thursday.

It fired up Bock in a unique way.

While he reviewed surveillance footage, Bock began to laugh at how little damage the suspect did. His restaurant’s endured three burglaries in three years. None of them less costly than the latest.

So the Katy-raised father, who considers himself a grown 12-year-old, got an idea.

“I watch him Army crawl and I’m just starting to laugh,” Bock said. “I’m reviewing this burglar. I’m going to do it like a foodie review.”

On the 1000 Degrees of Katy Facebook fan page, Bock posted a photo of the damage to his store and did a “Yelp Review” of the burglar’s actions.

In the post, Bock called the thief “courteous” for triggering alarms at a decent hour so that the owner did not wake up in the middle of the night. Bock also described the thief as “thoughtful” for taking less than $20, choosing to avoid expensive doors and break-in through a small window.

Tongue-in-cheek, Bock added that “I see our Cauliflower crust is working as you could squeeze through that small opening.”

“I showed my wife and she’s, like, 'You’re such a dork,” Bock said. “I’m, like, yeah, but it’s funny. (I clicked) post and immediately I started getting reactions on it. I was like this is the smartest thing I’ve done all day.”

Dozens of likes and comments followed. The Houston Chronicle even published a web article about Bock’s post.

It is the attention that the small business owner hopes is an ingredient to future growth.

Harris County Sheriff's Office deputies do not have the burglar in custody.

RELATED: Triad family calls 911 thinking robot vacuum activated in the middle of the night was burglar entering their home