Katy ISD superintendent to step down in January 2019

Board members say the bullying accusations were more than just a distraction. They claim it was debilitating for students, faculty and Hindt. 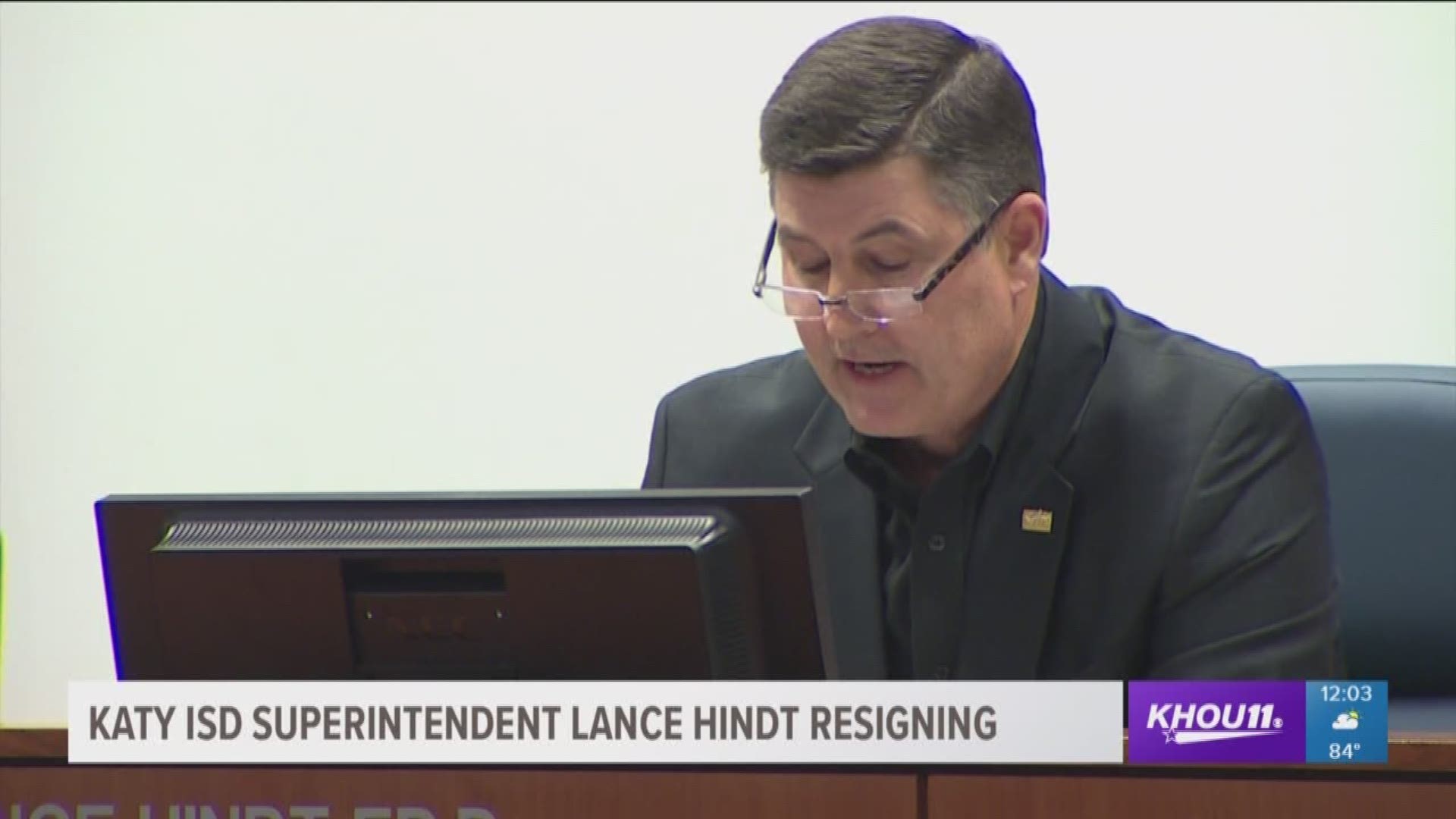 Hindt has been at the center of a firestorm ever since a former classmate accused him of being a violent bully when they were kids.

At Thursday's school board meeting, Hindt said he's had enough with the ugly accusations. However, the school board is going forward with a lawsuit to protect the district's reputation.

BREAKING: Katy ISD Superintendent Lance Hindt stepping down in Jan. 2019. “I can not justify putting my wife and family through it any more.”

Hindt plans to stay through the transition period while the district searches for a new superintendent.

Board members say the bullying accusations were more than just a distraction. They claim it was debilitating for students, faculty and Hindt.

They say the district’s reputation has been damaged and has led to losing out on qualified hires. An attorney for the district said it’s for that reason they feel it’s necessary to spend what they need to pay for outside counsel. Attorneys would file defamation lawsuits on behalf of the district.

Hindt addressed the public and explained how the accusations were too much for him and his family to endure.

One by one, emotional board members called out those who “forced these actions.”

Greg Gay, who first accused Hindt of bullying says he was “heartbroken” to hear the news of Hindt stepping down. While he has wanted to see bullying addressed within the schools, he’s always felt Hindt was the man to take on that responsibility.

As he puts it, who better to address bullying then a man who’s been accused of bullying and has since reformed his life?

Also in attendance was Sean Dolan, a parent whose critical comments about the districts bullying policy have made him a target for rebuttals from school board leaders.

Dolan has been in the back of meetings for years pressing the district to address bullying at Katy ISD. He’s recorded evidence of his own to prove his child was the victim of bullying within the school district, but he claims the district disregarded his concerns.

Frustrated with the lack of a response, Dolan felt compelled to expose Hindt for the very dissertation behind his career in education.

“I Googled Dr. Hindt’s dissertation, I ran it by a free online check and up popped Keith Rollin’s dissertation with exact matches between them,” Dolan said.

Dolan says he took the findings to the school board president, who again disregarded what was found as a smear campaign against Hindt.

When asked why he chose to make public his findings, Dolan said there was no other way to be heard.

“I don’t know what else to do. The channels that we have in place to air grievances is broken,” Dolan said.

If a lawsuit is filed against either Dolan or Gay, they both say they’re prepared to deal with them. Knowing very well it could lead into a lengthy and costly legal battle.

“The burden of proof for defamation for a public figure is very difficult. You have to prove that I knew what I said was false and everything I said, I think is true. So that’s my defense,” Dolan said.

Dolan pointed to the Texas Anti-Slapp statute which protects the first amendment rights of individuals, so they can avoid expensive and exhaustive legal proceedings meant to silence them.