Tuesday evening, KHOU learned of a civil lawsuit filed against Hindt when he was 18 years old. According to the lawsuit, Hindt was involved in an incident where he allegedly got out of his car and beat a man into unconsciousness for yelling at Hindt to slow down. 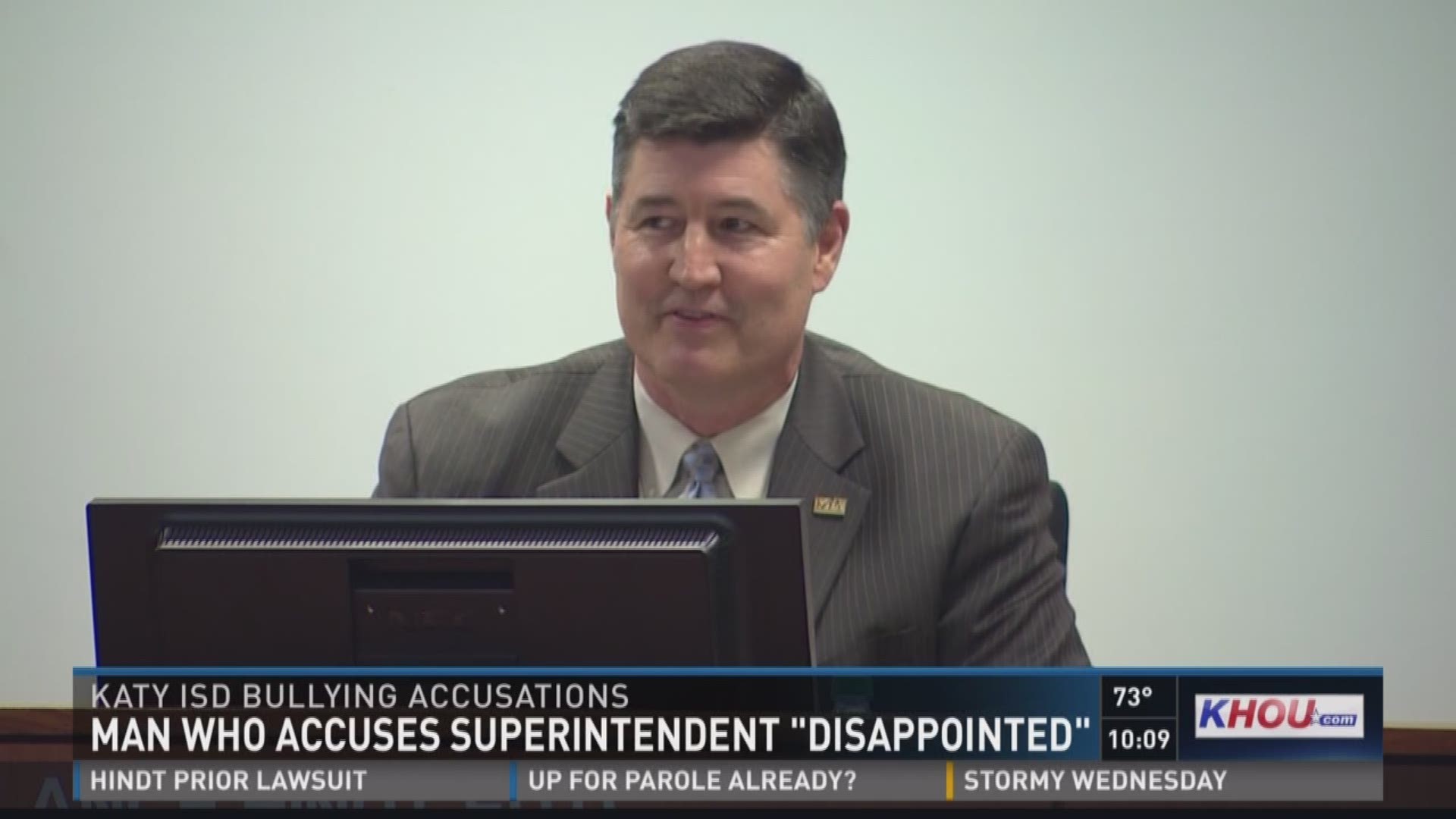 KATY, Texas – A disappointed Greg Gay wants more accountability from Katy ISD and the superintendent he alleges bullied him decades ago.

Applause rang out as supporters rallied around Hindt, but Gay says there was no remorse for the teasing that almost led him to commit suicide.

Gay who formerly went by Greg Barrett, says he changed his last name shortly after to avoid any more teasing. He goes by Gay now as an adult.

“It was an admission of guilt in a very mild manner,” said Gay after hearing Hindt tell parents he was not a perfect person.

The two attended West Memorial Junior high school and that’s as far as Hindt has been willing to admit as part of a written statement issued shortly after the video of the encounter went viral.

Gay says since the video hit the airwaves, he’s received messages from all over the world. Complete strangers write messages to him, sharing support and even plans for confronting their own bullies.

It’s not what Gay expected, but instead the response he was hoping for. He says ultimately, he’s yet to hear from the school district who in statements have dismissed the accusations as gotcha’ news.

That being said, Greg wants Hindt to remain the superintendent because as he describes it, who better to investigate the loopholes that has bullies flying under the radar.

“I read all these statements from students and teachers and stuff. That means a lot and that’s a good thing, but we have a problem of bullying in KISD,” said Gay.

Tuesday evening, KHOU learned of a civil lawsuit filed against Hindt when he was 18 years old. According to the lawsuit, Hindt was involved in an incident where he allegedly got out of his car and beat a man into unconsciousness for yelling at Hindt to slow down.

In the 200 plus page document, Hindt explains that he was attacked and dragged out of his car before striking the man once. The suit was eventually settled without any criminal charges being filed against Hindt.

School district officials say they were aware of the lawsuit in the hiring of Hindt.

“The 1983 civil case was fully and finally dismissed, after litigation, with no damages or liability. No criminal charges were ever filed. Again, as stated in the March 26 Board meeting, the Board fully vetted Dr. Lance Hindt and we continue to stand firmly behind him as our superintendent.”