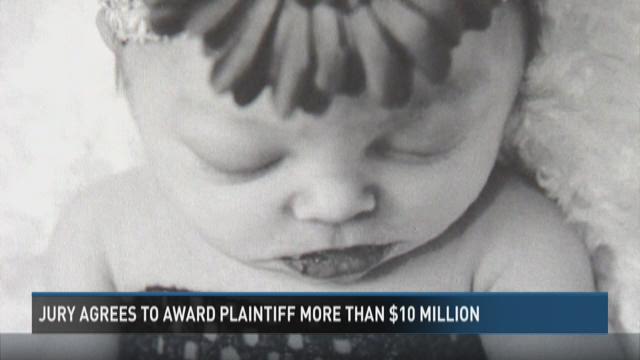 Baby Olivia's mother Rachel Melancon, broke down in tears as the verdict was read in court awarding her $10,200,575.

The Medical Center of Southeast Texas released this statement...

"While we are very sympathetic for the mother's loss and apparently, the jury was swayed by sympathy as well, we strongly support our nurses and the excellent care they deliver. We disagree with the verdict for a number of legal factual reasons and will pursue post verdict relief and appeal." - Richard Gonzalez, CEO, The Medical Center of Southeast Texas

12News has reached out to Dr. Backardjiev's attorney but she has not responded.

Doctors testified she died as a result of head injuries she sustained while being delivered with forceps.

Baby Olivia Coats passed away after living for only a few days after being taken off life support in January 2014.

Her mother sued delivery Dr. Backardjiev and the Medical Center of Southeast Texas.

She claimed negligent practices, including the unsafe use of forceps, during delivery ultimately caused Olivia’s death.

"It's real tough,” attorney Malachi Daws, who represents Olivia’s mom, said. “On the one hand I think that they are anxious to get this chapter of their lives behind them but on the other hand it is opening up old wounds."