'I am lucky enough, and just blessed really to call you a friend and a brother,' said Rep. John Lewis 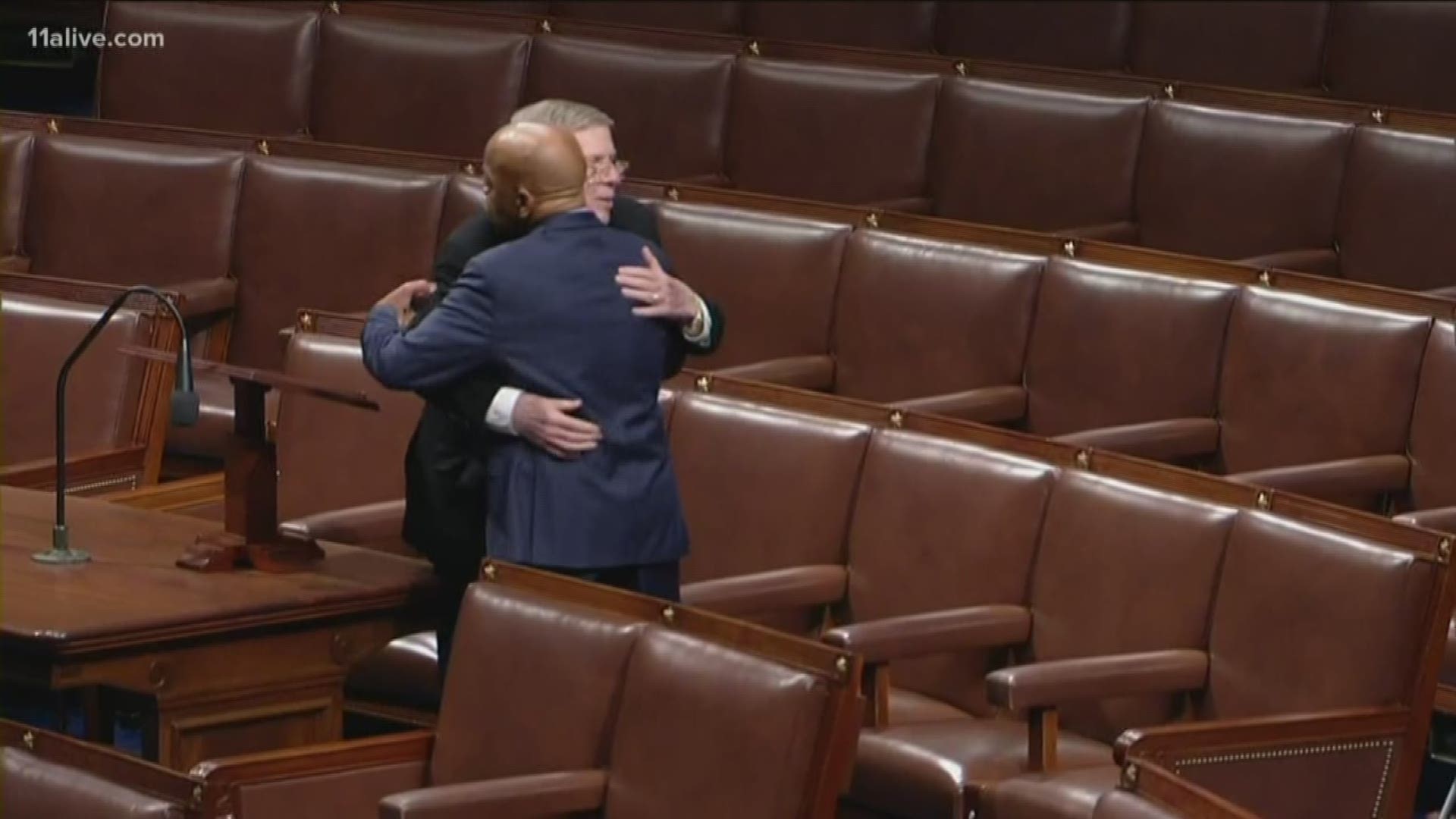 WASHINGTON — In a few weeks, the year will come to an end and Sen. Johnny Isakson will step down from his Congressional seat.

He announced in August he would be resigning, effective Dec. 31, due to the mounting health challenges he's been facing.

But before that takes place, members of the Georgia Congressional Delegation took time to honor Isakson - a man who has dedicated decades of his life to serving others. For about an hour on Tuesday, congressional leaders paid tribute to Isakson from the US House floor.

One of the most touching moments came as Rep. John Lewis ended his speech calling Isakson his brother and embraced him with a handshake and hug.

"Sen. Isakson is a special man. He is a good man," Lewis said as he started his tribute. " I want to thank him for his years of service in the Georgia state legislature, in the United State House of Representatives and now in the United States Senate."

Lewis recalled the Feb. 25, 1999 day when he introduced Isakson as the newest member of the Georgia Congressional Delegation, when Isakson started out as one the House of Representatives.

But even before his congressional years, Isakson served the people of Georgia. He was a successful business man and served in both the state House and Senate.

Lewis explained to the room that Isakson is a bridge builder.

"A man who has strong belief but also willing to work with others to get things done," he said.

Lewis, a Democrat, said Isakson, a Republican, is willing to work across the aisle.

"He did not just talk the talk, he literally walked the walk," he said.

“Time and time again he stood up with his, he worked with us to uplift African Americans in the state of Georgia," Lewis explained.

"I am lucky enough, and just blessed really to call you a friend and a brother."

“Madam Speaker, it is almost difficult to yield back the time when I speak of this good and great leader from the State of Georgia," he said. "Thank you brother for your service.”

As he ended his speech, Lewis tells Isakson "I will come over and meet you brother."

The two men walked towards each other to meet for a handshake and hug - a moment that was incredible to witness.

As the room is silent, they share a few words among themselves and take their seats. Before the tributes continued, Georgia Rep. Austin Scott took the time to acknowledge the moment that had just occurred.

“Madam Speaker, I wish all of America could be here to see that ... two icons from Georgia embracing. What I wonderful sight that I think is representative of the days of the past and the days to come and how we should work together," he said.

Isakson expressed gratitude for the speeches in a tweet.

"I was so moved by the speeches my House colleagues made today on the floor and was thankful for the opportunity to show my appreciation to @repjohnlewis and each one of them," he said.

Watch all of the tributes below.

He ate a cupcake, so they used a bat to beat him to death, police say