Carter turned 95 on Tuesday, becoming the first U.S. president to reach that milestone. 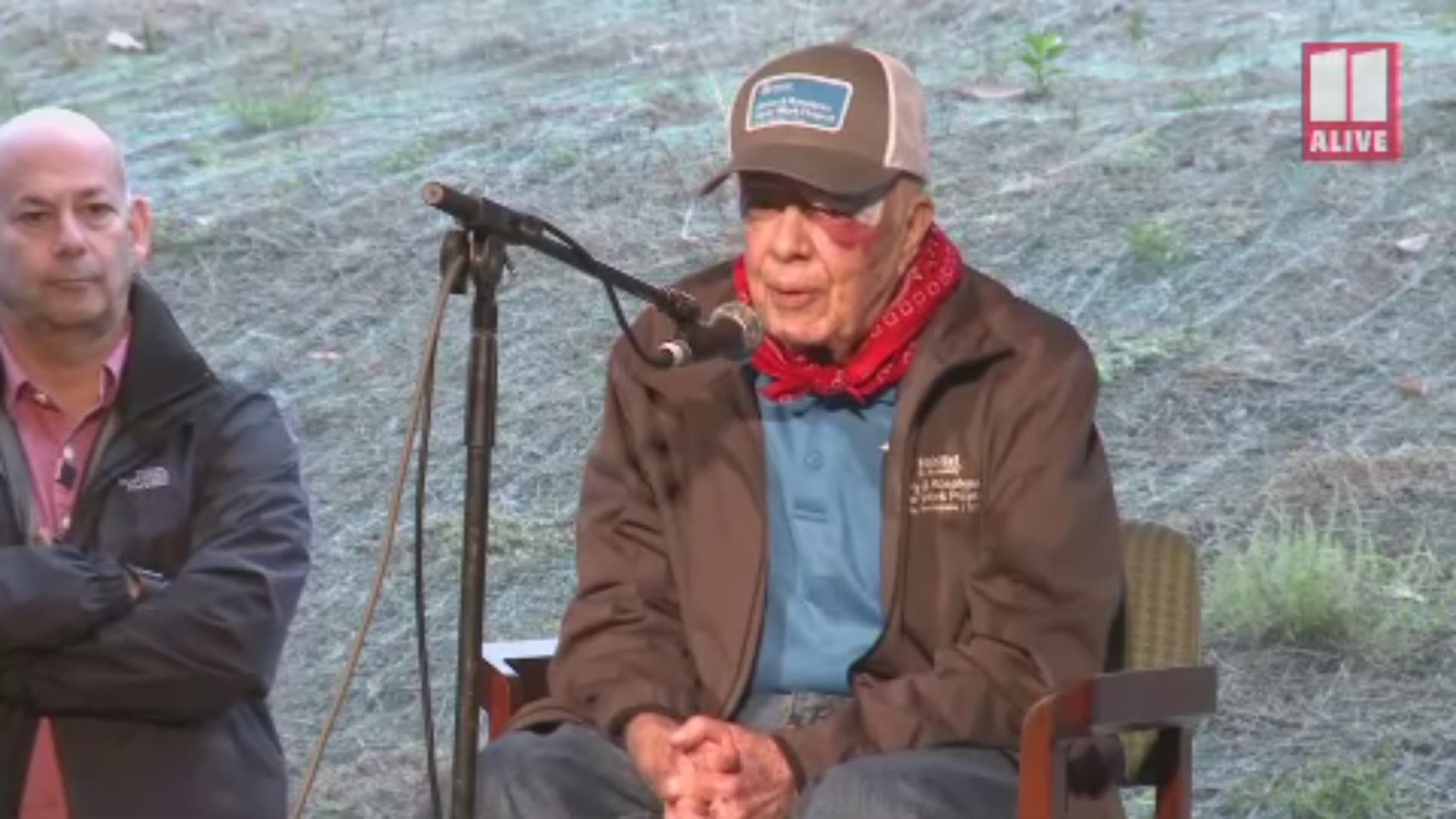 PLAINS, Ga. — Former President Jimmy Carter had a black eye and 14 stitches after falling Sunday at his Georgia home but made it to an evening concert in Tennessee to rally volunteers ahead of his 36th home building project for Habitat for Humanity.

And Monday morning, he's leading hundreds of volunteers in a build for the organization.

The 39th president fell earlier Sunday at his home in Plains, Georgia, and required the stitches above his brow. By Sunday evening, Carter was on stage at the Ryman Auditorium in Nashville with his wife Rosalynn, 92, to talk to volunteers and supporters of the building project that runs through Friday.

He told the crowd Sunday evening that he had to go to the hospital and get 14 stitches, "but I had a No. 1 priority and that was to come to Nashville and build houses."

Carter wore an Atlanta Braves baseball cap, but his left eye was swollen and bruised and he had a white bandage above his eye. The Carters were introduced by country stars Garth Brooks and Trisha Yearwood, who called the Carters the hardest working volunteers, and sang some duets during the concert and ceremony.

Rosalynn Carter praised the country music couple for volunteering at previous Habitat for Humanity building projects, saying she once saw Yearwood way up in the rafters of a home working hard during construction.

Former President Carter then joked, "While Garth just watched her," drawing laughs from the crowd and from Yearwood. Carter seemed to be in good spirits and came out a short time later on stage to point to his baseball cap and mention that the Braves beat the St. Louis Cardinals that day as well.

Twenty-one homes are scheduled to be built in a neighborhood in Nashville. The concert also featured performances by Melinda Doolittle, the Fisk Jubilee Singers and members of the Nashville Symphony Quartet.

Carter survived a dire cancer diagnosis in 2015 and surpassed George H.W. Bush as the longest-lived U.S. president in history this spring. He has had some trouble walking after a hip replacement in May, but regularly teaches Sunday School.

Meanwhile, he has continued with his humanitarian work. And he also has occasionally weighed in on politics and policy, recently expressing hopes that his Carter Center will become a more forceful advocate against armed conflicts in the future, including "wars by the United States."

"I just want to keep the whole world at peace," Carter had said as he presented his annual Carter Center report last month. "We have been at war more than 226 years. We have been at peace for about 16 years" since the Declaration of Independence in 1776, he said, adding that every U.S. military conflict from the Korean War onward has been a war of "choice."

Carter also has been accepting visits from several 2020 presidential candidates of late, but he's held back on endorsing any of his fellow Democrats, offering few clues about his thoughts of the campaign.

Jimmy Carter says he couldn't have managed presidency at 80