A new report reveals that a Deer Park chemical storage facility was not equipped with gas detection alarms or emergency shutoff valves. 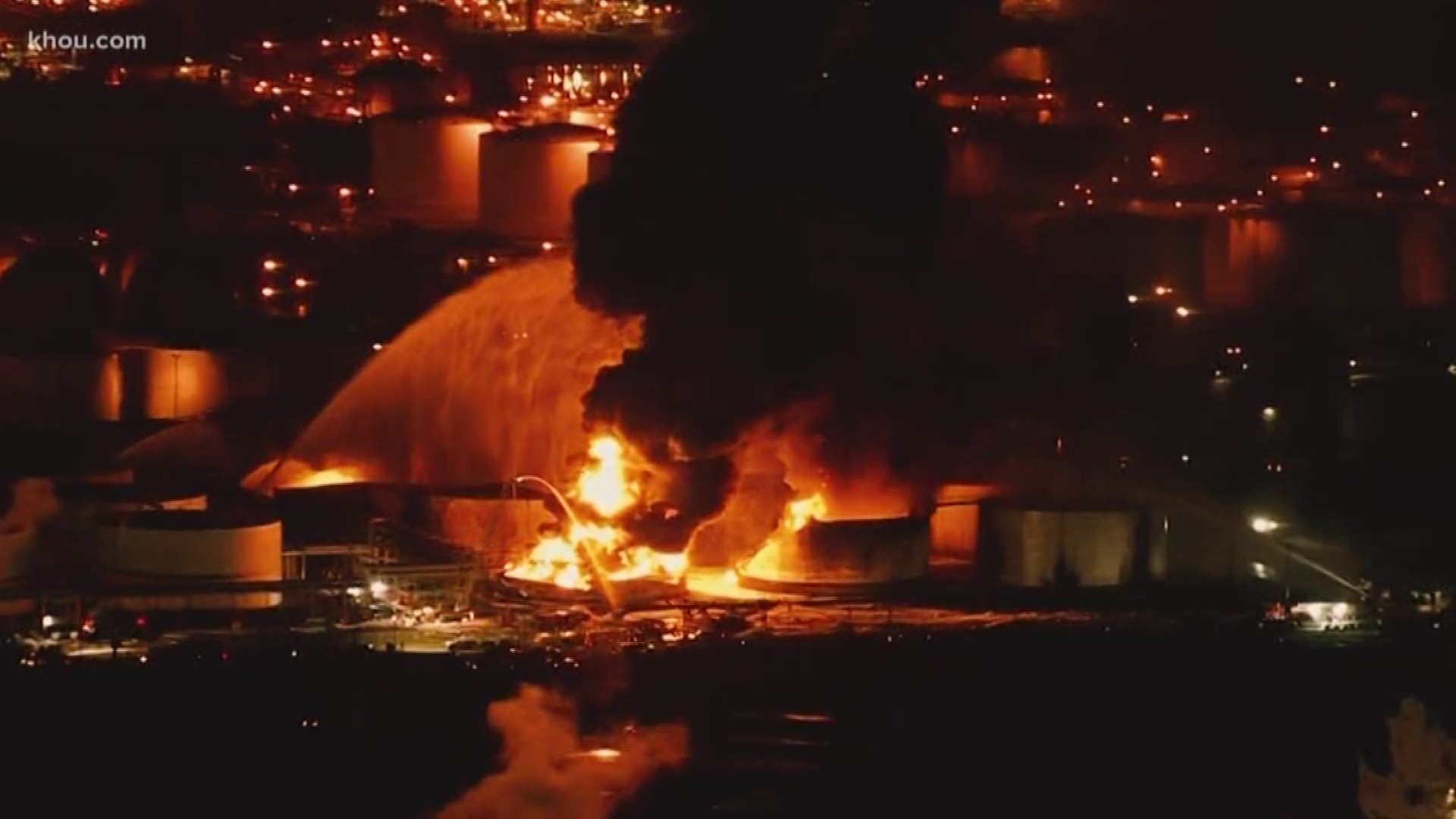 DEER PARK, Texas — A Deer Park chemical storage facility was not equipped with gas detection alarms or emergency shutoff valves that could have isolated a raging fire in March, according to a new report by the U.S. Chemical Safety and Hazard Investigation Board.

The CSB preliminary investigation revealed that the Intercontinental Terminals Company (ITC) was unable to stop the release of naptha, a flammable liquid used as a blend stock for production of gasoline, from an 80,000-barrel above-ground storage tank. While the federal report did not conclude what originally sparked the fire that intensified and spread to additional tanks, it did provide a detailed timeline of what led up to the massive blaze:

Two cargo tank trucks unload butane into Tank 80-8 using external piping equipment known as the “piping manifold.” The injected butane is used to increase the octane level of the fuel product. Following completion of the two butane delivers, a pump remained on to circulate the product.

RELATED: Fire reported at ITC during 'deconstruction of tank' at Deer Park plant

Data indicates a series of unanticipated changes to pump operating pressures and tank volumes. The fluctuations “suggest a mechanical problem developed in the pump circulation system.”

Data indicates the pump discharge pressure suddenly drops and the tank volume begins to decrease steadily. Over the next 26 minutes, the tank loses approximately 221 barrels of product, which escaped into the environment.

A large fire erupts in the vicinity of the Tank 80-8 piping manifold. The tank’s pump shuts down and loses remote communication with the ITC control room.

ITC did not install isolation or shutoff valves or alarms

Most notablly, CSB investigators reported that ITC did not equip its piping equipment with emergency or remotely operated isolation or shutoff valves, which could stop an uncontrolled release. As a result, those valves must be manually opened and closed.

After the fire erupted, “neither ITC operators nor emergency responders could access the area to close these manually operated values,” investigators wrote in the report.

Additionally, the ITC tank was not equipped with a fixed gas detection system, so no alarms were activated in the ITC control room.

“As a result, ITC personnel were unaware of the naptha product release before the fire erupted,” investigators wrote.

Fallout from the ITC fires

Over the next three days, the fire progressively spread to another seven tanks and emitted a huge black cloud of smoke that could be seen for miles. The City of Deer Park issued two separate shelters-in-place and six school districts closed their doors.

According to the CSB report, further testing will be conducted on Tank 80-8’s piping equipment to try to determine release points and ignition sources. Investigators said they are collecting additional evidence including command records, photos and videos, and a detailed final report will be published at the conclusion of the investigation.

Calls to ITC for comment were not immediately returned. This story will be updated when any company statements are released.

ITC released the following statement about the report:

"ITC has been cooperating with CSB and other federal, state and local regulatory authorities in their respective investigations of the March fire at the Deer Park facility. These investigations continue, and ITC is working with the government agencies to identify potential causes and take appropriate steps to ensure safe operation."