Texas judges may have overstepped by clearing violent criminal records 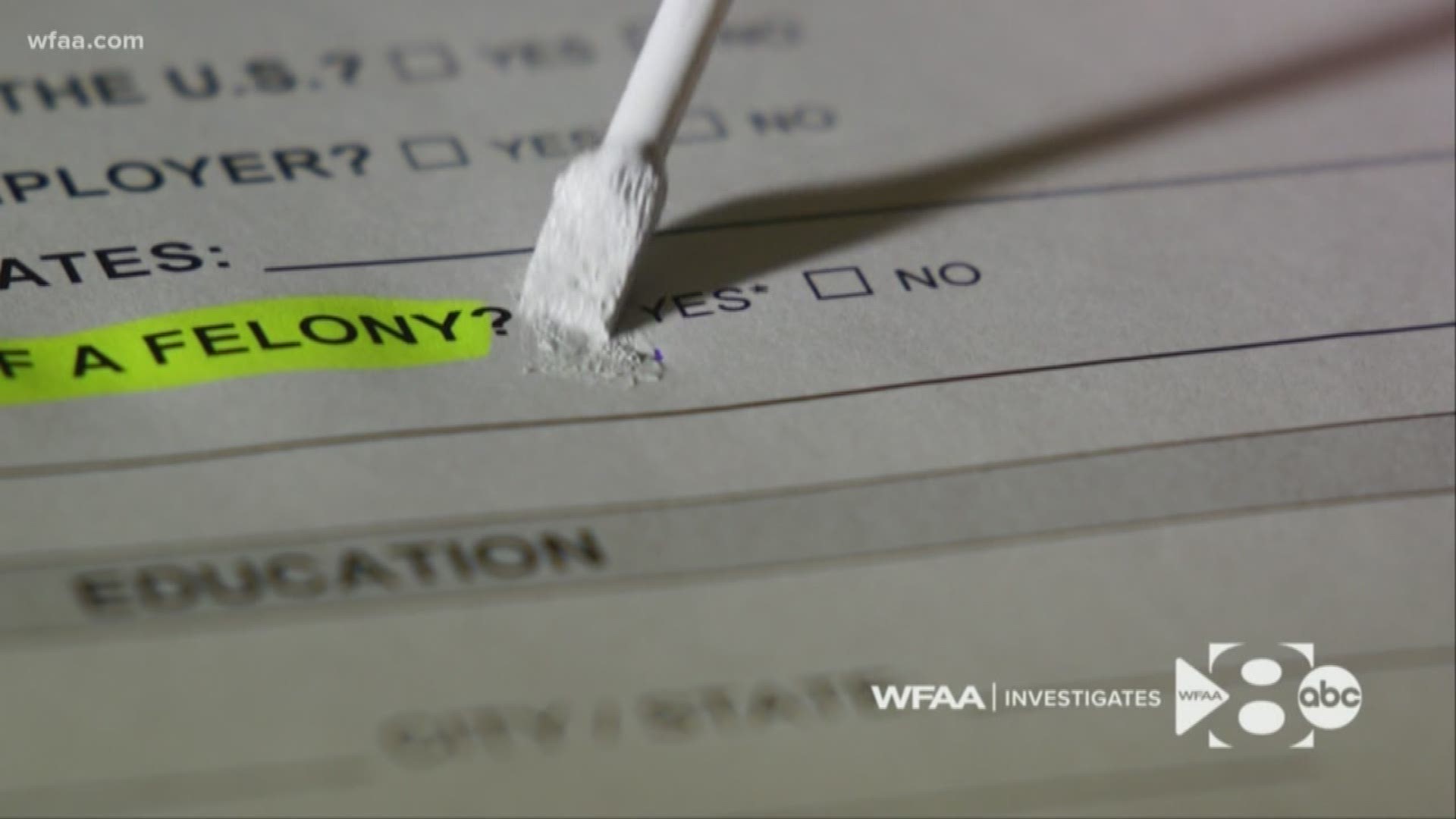 She was molested when she was 14 after she fell asleep on the couch. She woke during the assault.

Parkinson, now 32, said she is appalled to learn the man who molested her had his criminal record wiped clean from public disclosure.

“He has this little piece of paper to conceal what he has done," she said. "It’s egregious. It’s awful.”

A WFAA investigation found that Parkinson's case is among a growing number of examples where Texas judges may have overstepped their authority by granting orders to “clear” criminal records of ineligible defendants.

Lawmakers had good intentions when they passed a law in 2005 to allow criminals to have certain crimes wiped off their records. It’s known as the “nondisclosure” act and prevents employers and the public from ever seeing those prior offenses.

Legislators believed a one-time offense — such as a drug offense or nonviolent conviction — should not block a person from finding a job.

One woman, who has gotten a nondisclosure, said she was repeatedly was beset by a prior drug conviction.

However, a WFAA sampling of thousands of possible nondisclosures found Texas judges may have wiped clear the records of dozens of offenders who committed crimes outside the bounds of state law — crimes that may be violent, including sex crimes and domestic abuse.

WFAA presented possible cases to the district attorneys in the state's two most populated counties, Harris and Dallas.

By law, neither district attorney was able to discuss specifics regarding any of the possible nondisclosures WFAA submitted.

Houston judges, for example, granted about a dozen nondisclosures for crimes that may have been ineligible, the Harris County District Attorney’s Office confirmed upon receiving a list of 53 possible cases.

Dallas judges may have granted six nondisclosures for crimes that should have been disallowed.

Dallas County District Attorney John Creuzot said he wants to determine if mistakes were made.

His office was responding to a list of 50 possible cases brought to him by WFAA. The possible cases were granted before Creuzot took office in January.

Creuzot is a former state district judge and defense attorney.

“The six – if there are mistakes on any one – doesn’t make a difference whether it is six or one - then we should’ve caught it,” the Dallas DA said.

“We want to make sure that judges are following the law, "Cruezot added. "And if necessary, we will point it out if they are not."

But others, like Scott Durfee, general counsel with the Harris County District Attorney’s Office, said asking judges to rescind or vacate any nondisclosure order may not be possible after 30 days.

WFAA has found that there is little or no statewide legal oversight to ensure nondisclosures granted by judges are proper and legitimate.

This is especially relevant because a judge’s nondisclosure order is secret to the public and cannot be appealed. Only the county district attorney has input.

Here’s how the process works: an offender applies to have his or her crime nondisclosed. A state district judge then decides whether to grant it in the "best interest of justice," without being required to get input from the crime victim or the public. In fact, there’s no publicly available record of it.

The public and victim cannot find out if an offender applied for nondisclosure or even if it was granted.

As a result of inquiries, the WFAA investigation found that no state agency has initiated oversight of the program. That includes the Texas Attorney General, Texas Department of Public Safety, Office of Court Administration and the Texas Legislature.

Despite the lack of oversight, Texas lawmakers continue to expand the program.

Since the program began, lawmakers have expanded the statute to include more crimes, as well as reducing the waiting period for those who apply.

Crime victim advocates said they are troubled by the program’s expansion and lack of input from actual victims.

“We don’t even know if the program is working or not because there’s no available data or oversight,” said Andy Kahan, a victim’s advocate with Crime Stoppers of Houston.

“Victims are part of the system and you can’t simply remove them from the equation and pretend they don’t exist,” Kahan said. “How do you expand such a program where the victims are swept away with zero input? And from what you tell me, some of these cases don’t even qualify.”

As the constraints have shrunk and law expanded, attorneys who file nondisclosures have turned it into a cottage industry with website advertisements.

Records show more than 4,000 are filed each year, according to a Texas Department of Public Safety annual report.

Dallas attorney Pete Schulte said he is among a group of lawyers who advertise this option on the internet.

“I found a niche and it’s a great practice builder,” Schulte told WFAA. “It is a business when you get down to it."

Schulte estimates he has filed a "few thousand" nondisclosures in the past decade. And he acknowledged some of the cases may not technically qualify.

“That’s when you’re going to get a judge to bend the rules a little, but they are going to do it in the best interest of justice even if it doesn’t otherwise qualify under the law,” Schulte said.

Yet out of all his cases, Schulte told WFAA that prosecutors rarely put up a challenge.

“They just agree to it,” Schulte said. “So, we don’t have a contest hearing. I show up on the hearing date and the judge says, 'What is the state’s position?' 'They are not opposing it, your honor,' and they sign the order.”