CROSBY, Texas – The images were haunting.

A city underwater. Tens of thousands washed from their homes across Houston.

But what no one realized at the time, was within days, the world would turn its attention to a small patch of land in northeast Houston, and the explosive situation that would force one of the world’s largest chemical manufacturers to admit it made mistakes, and tell the world it needs to do better.

As the nation watched Hurricane Harvey hit the Texas coast and drop more than a trillion gallons of water across Southeast Texas, industrial chemical manufacturer Arkema found itself in a critical chemical crisis.

The company’s Crosby plant, which produces organic peroxides, saw its refrigeration system used to cool those chemicals fail, as well as its backup generators. The chemical is safe when it’s stored below 30 degrees, but becomes extremely volatile when it’s heated.

The plant had nine containers, the size of truck trailers, filled with the chemicals—a ticking time bomb waiting to explode.

Arkema officials said they had no idea there was going to be 25 to 30 inches of rain due to Hurricane Harvey. They said they didn’t think their plant could ever flood like this, even though it was built on a floodplain, according to the Harris County Flood Control District.

So plant officials didn’t feel there was a need to have a neutralizer on site to counteract the half a million pounds of liquid organic peroxide stored on site in the event something went wrong, such as if the refrigerator system and backup systems that keeps the chemicals cool failed. The chemical is safe when stored below 30 degrees, but becomes extremely volatile when it’s heated.

Company officials said every decision made would be based on keeping people and the community safe.

But Arkema said there was “no way to prevent” all nine containers from exploding at its Crosby plant.

All there is to do, they said, is wait for the chemicals to ignite.

The area around the plant is mostly farmland. The high school has its own livestock building, right next to the baseball stadium. Federal numbers show the area within a three-mile radius of the plant that nearly one in four people live in poverty.

By late Monday night, the facility was flooded and lost both its primary power supply, as well as two sources of emergency backup electricity. They were critical losses, because of the volatility of organic peroxides when heated. When the plant lost power, it lost the ability to refrigerate the materials. That sent temperatures soaring in the nine truck trailers used to store between 15,000 to 20,000 containers of the chemical.

By then, not a single Arkema employee was on-site and nearby homeowners sought safe haven.

Anticipating problems, the company ordered an 11-person storm ride out crew to evacuate on Tuesday as floodwaters continued to rise. Residents within a 1.5-mile radius of the plant were ordered out of their homes because of the rising risk of an explosion.

On Wednesday, Richard Rowe, the chief executive of Arkema’s North America unit, said the company expected the chemicals on site to explode in the next six days.

The company has defended its decision not to make public how much chemicals were kept on its Crosby site, and where those highly hazardous chemicals were stored. Instead, Arkema released a list of raw materials and commercial products kept at the facility on the company’s website, on a page set-up to address the incident unfolding in Crosby. Rowe said the amount of flooding was “something I don’t think anyone in this area ever predicted,” although a reporter pointed out to him that meteorologists had called for as much as 30 inches of rain.

Arkema refused to release the document, claiming the state didn’t require disclosure. But did the limits on open government cause a public safety issue?

For the last few days, several residents of Crosby discussed their frustrations of being blockaded from their homes with KHOU.

“We were only allowed to take one bag ... (We were) separated from our kids. My middle child has a high blood pressure … reaction from stress. FEMA won’t help with medical need(s).”

“We have 10 minutes and we have to be at the end of the drive. So I literally had to grab medicine, grab what few clothes I could for my family of four, put them in bags and walk out the door. Our house was not flooded, but we did not pack work clothes for my husband, school stuff for our kids, proper shoes. Just the clothes on our back …”

One woman said her neighbor had put her dog in a crate and prepared to evacuate with the pup. But when she walked out with crate in hand, the officers told her she had to leave the pet behind. She placed his crate on the bed, hoping she’d be back. Days later, she still hadn’t.

Her frustrations, echoed by others who were forced to leave without their cats, boa constrictors, dogs and horses. Not just pets, they said, but members of their family, left to fend for themselves without food or anyone to care for them.

Some Crosby locals felt Arkema doing all they could. Others feel too little too late. Most were frustrated by mixed messages. #KHOU11

The residents were told the company wouldn’t pay for anything. One man estimated he had spent $400 on clothes for his family and fuel, plus a $125-a-night hotel fee. A mother of five figured her displacement cost her close to $700.

And there was no going home. Since they had left the 1.5-mile radius evacuation zone, they weren’t allowed back in. Even residents who lived outside the evacuation zone reached out to KHOU saying they were not being allowed back in. Several reported being stopped by the Harris County Sheriff’s Office. When KHOU reached out to the Harris County Fire Marshal’s Office about the complaints, they said they would look into it. No one from the agency ever called back.

Then there were those within the evacuation zone who had chosen not to evacuate. Many were victims of Harvey’s floodwaters themselves. Now, as the water receded, they were eager to start repairs on their homes. But they, too, were told by local officials that if they left, they wouldn’t be allowed back in. Even those who didn’t flood were running out of supplies. They needed food and medication. One complained of feeling like she was held hostage in her own home. 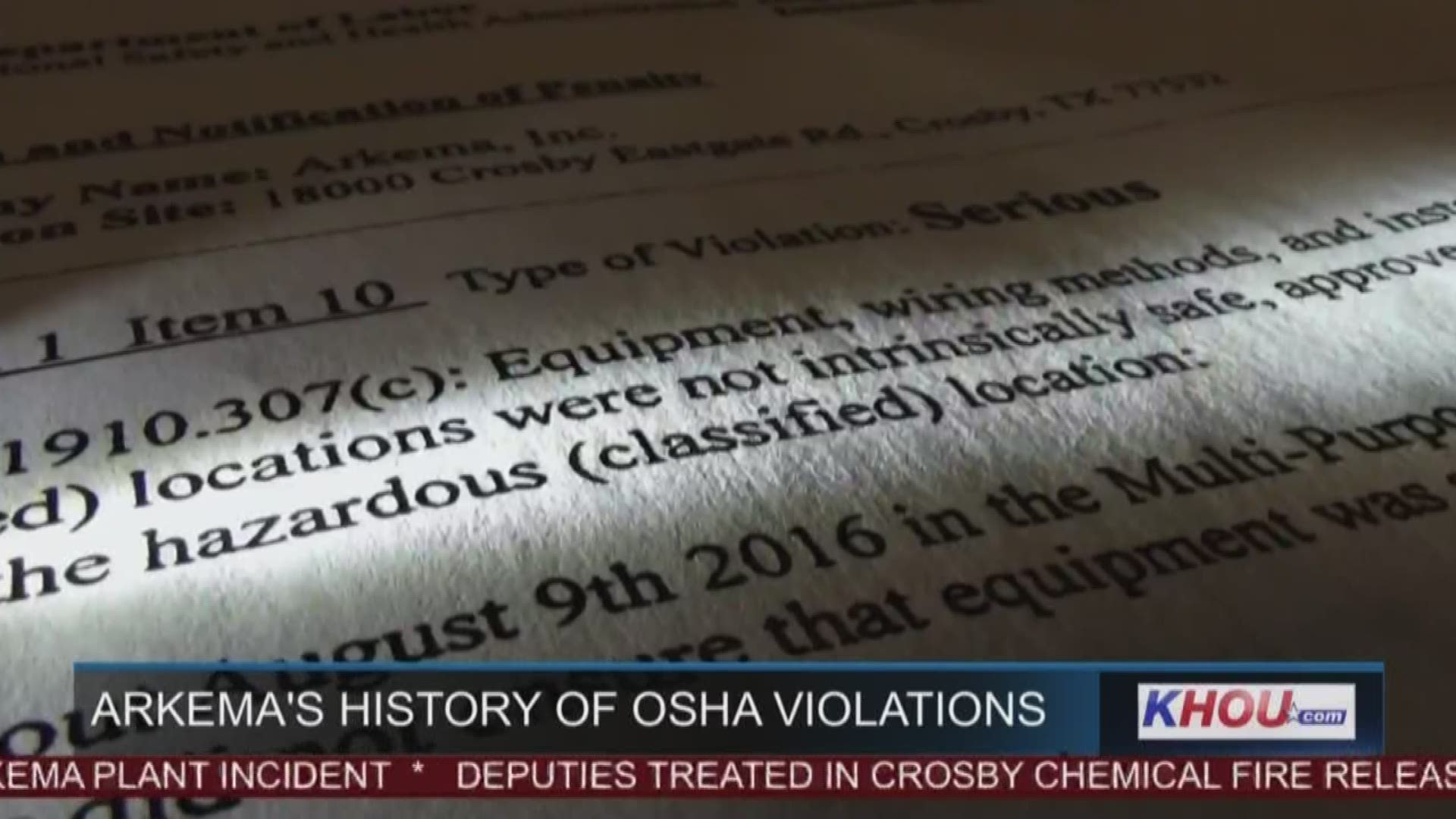 “They have every road blocked off with law enforcement,” one resident wrote on Facebook. “I have been in my house for eight days, underwater and I need groceries, pet food and critical prescription meds. This is not right.”

Evacuated residents took to social media asking those who didn’t evacuate if they could please check on their homes – they’d heard of looters – and pets who needed restroom breaks and more food.

Frustrations rose at the lack of answers from Arkema.

When Arkema was asked by a reporter if there was any indication when owners would be allowed back in, the company gave no specifics.

“As difficult as it is for the residents on the ground in Crosby, I’ve said several times we’re working closely with all of the emergency support teams in Harris County,” Rowe said. “That led to the establishment of the evacuation zone that is in effect. We know the situation is ongoing and active.”

By Friday afternoon, two more trailers ignited, creating a black plume of smoke caused by an intense fire that released irritants into the air.

As the world watched a heavy chain of smoke fill the wide open Texas sky, the residents of Crosby watched for the reaction of Arkema officials.

Neighbors cheered on social media as they watched news chopper footage of the fire.

“We was all hoping all of them went,” one wrote. “So ready to go home.”

They wished the other six would react and burn, but as the air cleared, their waiting continued.

On Saturday morning, three days after the company publicly predicted the explosions that would put life on pause for many in Crosby, Arkema representatives began reaching out to local residents, asking them to come to Crosby High School. They began giving people cash for immediate needs, as a “goodwill donation,” according to many locals who walked out of the high school. They told the residents they could get a hotel and a rental car. But the donation amounts differed and the hotels were as far away as downtown Houston and Pasadena. And the rental cars? There were none.

One resident was told there would be a shuttle from Hobby Airport that would take them to rent a car. It never showed. Another was told because of the widespread flooding across the region, there were no rental cars. Another was given a hotel room. Another was told if they could find a hotel room, Arkema would pay for it. But how would they get there when some of them had lost cars in the flood or had left them behind in the evacuation?

And then there were jobs to worry about and school starting up next week. Some residents were missing work badges and work clothes, necessities to work in the area’s numerous remaining chemical facilities. Some of their children ran out of their home without even shoes, let alone their school computer. 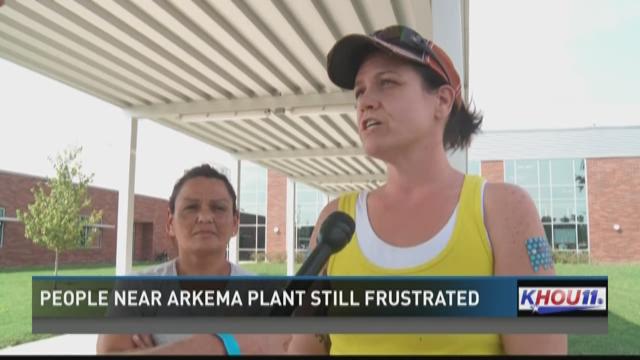 There seemed to be so many questions, but just a few Arkema reps on-hand to try and answer them, That meant another wait, for people who felt they’d been waiting too long for answers already.

Frustrations grew. The wait took hours. Some left and went home when they heard the representatives were planning to be back on Sunday. One emailed and said she was so devastated she wanted to curl up and hide until she could return home.

When KHOU showed up at the high school to question Arkema’s representative, police turned the news crew away and said no one would be speaking with them.

Multiple residents were given $200, KHOU was told. A mother with a family of five said she received $600. When she asked about being able to get her pets, she was told the Arkema reps were at Crosby High School to focus on immediate needs and that pets weren’t important.

The woman responded that her pets were her family.

Another woman said after sitting at the high school for three hours, she was told there were no rental cars or housing and that she could have $100.

She asked why people earlier in the day were getting $200.

The response, she said: “That was earlier. Pretty soon, it will be nothing.”

Her neighbors responded in shock.

For five long nights, they received mixed messages. The one thing they could all agree upon was that the Arkema representative who showed up at Crosby High School were nice and polite and that it wasn’t their fault. They blamed higher-ups at the chemical company.

When asked during a conference call Friday why it took so long to be transparent, Rowe said: “We’re managing our way through a crisis.”

When asked if they could have done that better, Rowe responded, “Sure. We’re doing our very best. We’re not perfect and we’ll continue to work to get better.”

As a news crew reported live from the empty high school parking lot Saturday, as helicopters flew overhead, as the chemicals inside the containers broke down, the residents of Crosby waited for the all-clear to return home, to return to their life before Hurricane Harvey washed away not just a chemical plant, but their sense of normalcy.

Then a resident asked the question most were thinking: “Did I just hear an explosion?”