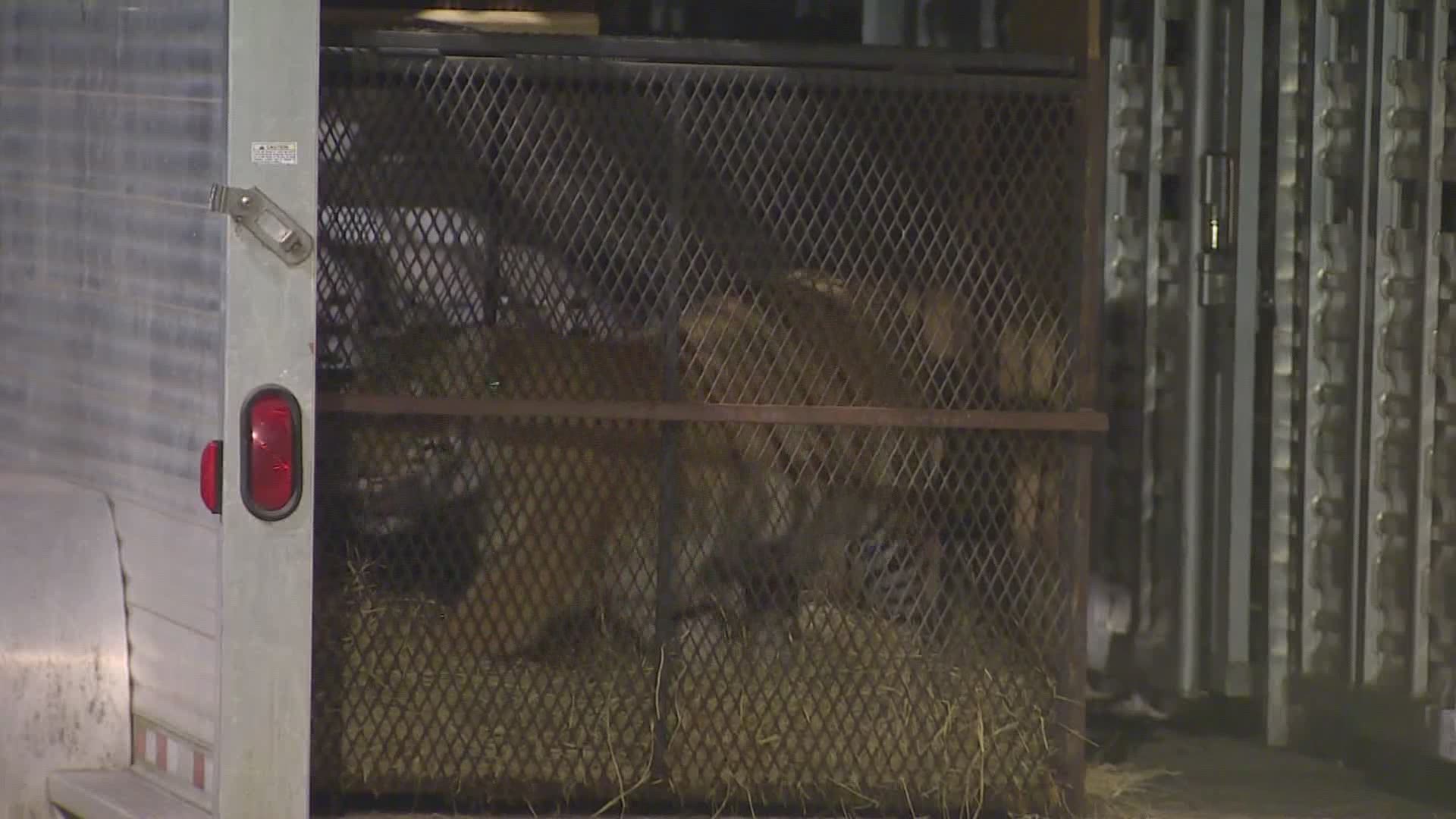 HOUSTON — It's moving day for India the tiger after he was turned over to police last night. India had been missing for several days since being spotted walking around a west Houston neighborhood last weekend.

Houston Police said the tiger appears to be unharmed and in good health.

The tiger had been missing since Sunday when Victor Cuevas, the man at the center of the investigation, was seen taking India into a home.

India is expected to be picked up this morning and taken to the Cleveland Amory Black Beauty Ranch, which is near Dallas. That's the same place that 'Tyson,' a tiger found in a Houston home in 2019, was taken.

“We met on the west side of town. We transferred the tiger to HPD and BARC and we brought him to BARC here," said Borza. "The tiger appears to be in very good health.”

Borza said the tiger belongs to Victor and Gia Cuevas.

"It is Victor's Tiger," said Borza. "I'm going with it's Victor's tiger. That's what I was told by her and she's the wife of Victor and she said they've had the tiger for about nine months.  And it's nine months old."

Police released video showing Gia Cuevas with Borza feeding the tiger after it was surrendered to HPD.

Houston police believe there are other exotic animals out there just like India.

“Just because we got India back today doesn’t meant there’s not other exotic animals in the city of Houston," said Borza. "I’d like to round them up and put them in a safe environment. They’re not safe in an apartment, not safe in a house. They need to be with other animals.”

Elliott said before his client went to jail, he was calling around to find India. And he said Gia Cuevas was searching when Victor Cuevas' could no longer.

Elliot claims Gia received an anonymous call from someone who had India and after a negotiation, Gia got the tiger and turned him over to authorities.

"An arrangement was made so a surrender could be had and that be done in an anonymous kind of way and we appreciate and thank the people who brought India back to safety as well,” said Elliott.

Elliott also maintained a person named DeAndre is the owner, but that Cuevas spent a lot of time with India.

As for the bond, Elliott says it's a decision for Cuevas' family.

Even Tiger King star Carole Baskin joined the hunt for India. She offered a $5,000 reward to help find the big cat.

"I’m delighted that India is safe and hope authorities will reach out to the Global Federation of Animal Sanctuaries at sanctuaryfederation.org for permanent placement," Baskin told KHOU 11.

On Friday, Victor Cuevas' bond was revoked in the case of a 2017 murder. The judge set a new bond of $300,000 with the same conditions as before.

Victor Cuevas was already out on bond for the murder charge when the Harris County District Attorney's Office charged him with evading arrest after he allegedly ran away from police with the tiger in the back of an SUV Friday.

Victor Cuevas was arrested Monday night and placed into Fort Bend County jail. By Wednesday he was released on a $50,000 bond.

Victor Cuevas’ attorney maintains his client was merely the temporary caretaker of India, the tiger, not the owner.

He also released new photos and a video of Victor Cuevas with the tiger taken over the past several months.

“India was taken to the owner of the cat. And it’s the owner who we are looking for." Elliott said during a briefing following the ruling.