Houston Police Department's Auto Theft Division is tracking the trend to explain why and what you can do to protect your vehicle. 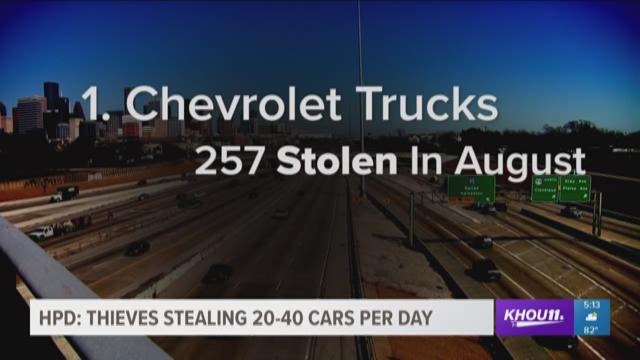 HOUSTON - Thieves in Houston are stealing between 20 and 40 cars per day, and they’re targeting two types of vehicles more than any others.

Houston Police Department’s Auto Theft Division is tracking the trend to explain why and what you can do to protect your vehicle.

The following is a list of the top 10 makes of vehicles reported as stolen to the Houston Police Department during the month of August 2018:

Chevy and Ford trucks were stolen more than all other vehicle makes combined. HPD Auto Theft Division Sgt. Tracy Hicks says there are a lot of Ford and Chevy trucks on the road, and they’re easy to break into.

“The manufacturers have no incentive to make these vehicles less stealable [sic],” Hicks said.

The risk of having your vehicle stolen goes up if you’re driving a 2008 model or older version of the trucks.

“You’re actually about 10 times more likely to have your older vehicle stolen, because all I need is a screwdriver and a pair of vice grips to steal it," he said.