HPD launched a pilot program with the company ANDE to test a machine that runs DNA tests in under two hours. 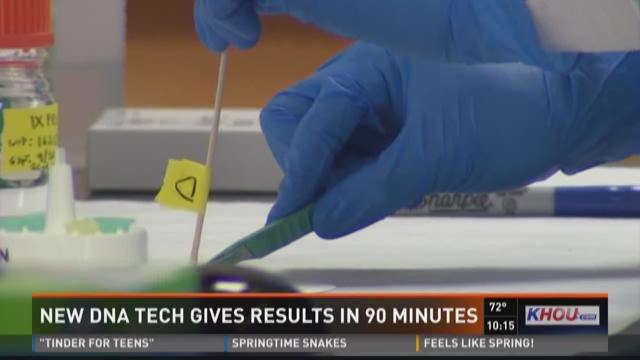 For the last 10 months, Houston police have been testing cutting-edge technology that could potentially get criminals off the streets faster.

HPD launched a pilot program with the company ANDE to test a machine that runs DNA tests in under two hours.

The machine has a variety of applications, including testing evidence at crime scenes.

For example, detectives could run a rapid DNA test if they find a weapon at a murder scene. They would swap the weapon and swab anyone who might be involved. Then machine would compare the samples to potentially reveal whose DNA is on the weapon.

As part of the pilot program, the protocol has been to swab each piece of evidence twice. First, the Houston Forensic Science Center takes an official sample for the lab, then Houston police take a second sample for the trial.

“These are the types of cases we want to solve quickly. If we don’t get those answers quickly, we may wait weeks or even months for those results to come back from the crime lab,” Meeler said.

“We have. I can’t discuss specific cases. But yes, we have been able to develop leads as well as eliminate potential suspects from cases, which is equally important,” he said.

Rapid DNA results can’t be used in court. It is only used for investigations.

However, some forensic scientists also have serious concerns about whether it should be used at crime scenes at all.

“I think everybody is comfortable that if there is a high concentration of DNA from a single source, so an oral swab from an individual, we’re confident the instruments produce good data. The questions start to come in circumstances where we’ve got touch DNA -- smaller quantities of DNA, more mixtures, there’s more people on that doorknob that I’m swabbing - there I’m not sure anybody knows yet,” said Dr. Peter Stout, President and CEO of the Houston Forensic Science Center.

The National District Attorneys Association has also spoken out against using the technology at crime scenes.

“NDAA does not support the use of Rapid DNA technology for crime scene DNA samples unless the samples are analyzed by experienced DNA analysts using that technology working in an accredited forensic DNA laboratory,” the association said in a statement.

Stout said there are also concerns about how evidence has been handled during the HPD pilot program.

He used a real-life piece of evidence, a blood-stained piece of glass, as an example.

“We sampled a small portion of it in the laboratory. We weren’t able to get a complete profile. All the data didn’t quite work when we ran it the first time in the laboratory. We went back to the piece of evidence to try and resample it for the laboratory, but in between, somebody had sampled it for the rapid instrument thinking we had already done our testing. When we went back to it, they had consumed everything that was there,” Stout said. “Now, in that case, there’s really very little that can be done with it.”

At this point, the FBI has only authorized the use of rapid DNA instruments at booking stations, so suspects’ DNA can be run through the national database. However, in Texas, laws would have to change to make that possible.

Meeler says rapid DNA’s future in Houston is up in the air, now the pilot program is almost over.

A big reason is the instrument comes with a hefty price tag. Despite concerns, HPD wants to move forward with the technology.

“It’s something that should be in every police department,” Meeler said. “I’ve worked murders for 9 years, almost 10 years. I’ve had to wait six to eight months for DNA results. I knew who the suspect was. I was just that far away from proving it. I had to wait six to eight months for that sample to come back. With this, I know in 90 minutes. It’s beautiful. To have that piece of mind, that I know I can take a killer off the street that quick is…you just can’t describe it.”