'Don’t get on his neck now': This arrest involving Houston police has gone viral for all the right reasons

A video of an HPD arrest has gone viral even being shared by musician, Timbaland. It shows officers asking onlookers to assist them in an arrest. 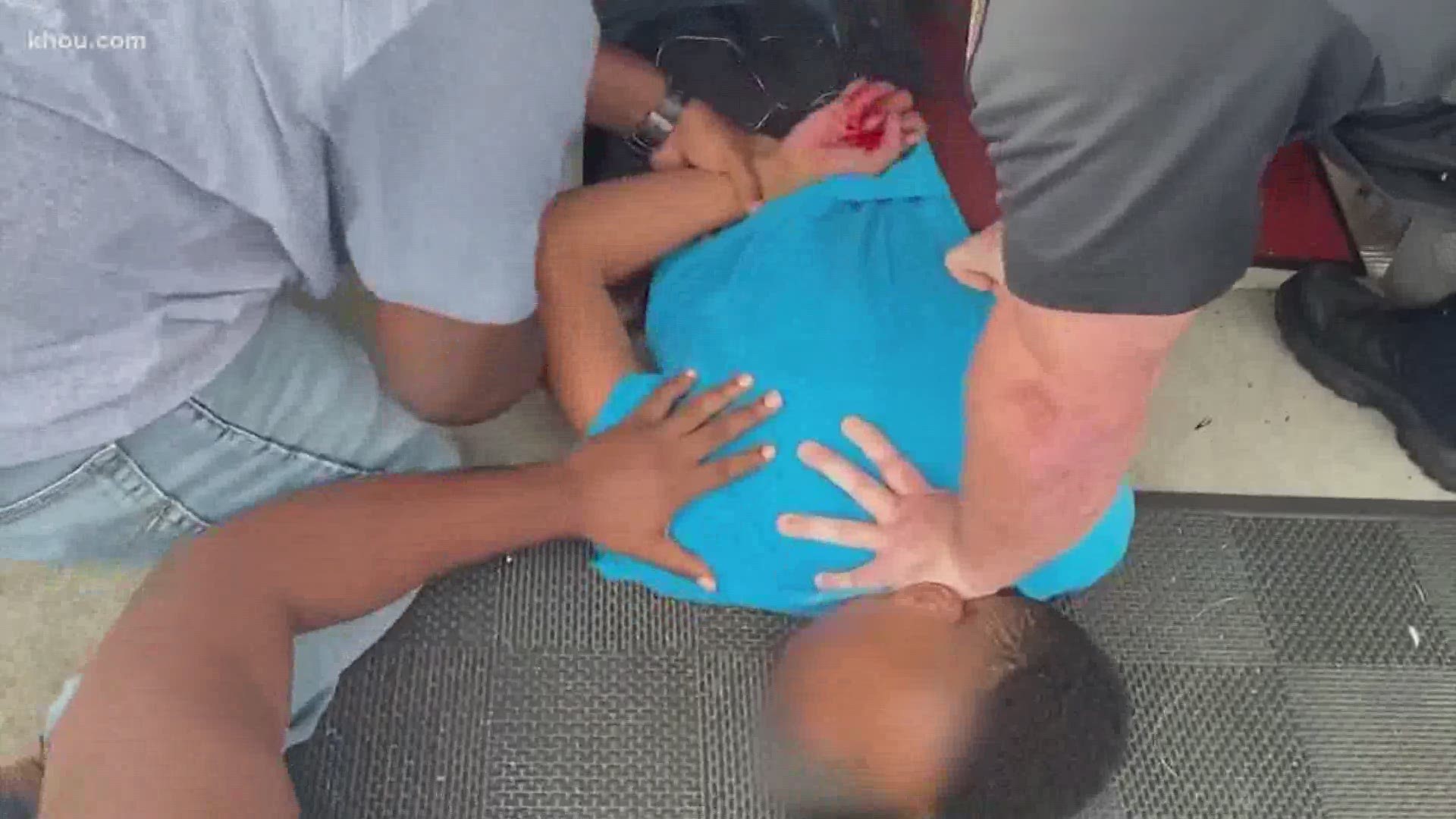 HOUSTON — It’s a Houston Police Department arrest that's going viral for all the right reasons. It shows cops and the community working together. The video was taken July 6 outside a gas station on Fuqua Street in southeast Houston.

Ulerick Fields was the photographer, who was going to the businesses to buy some gum. His video shows panicked customers running out because of a disturbance in the store. One person is heard saying, “He’s got a knife! A butcher knife!"

Next, the video shows police arrive at the scene and go inside. Through the windows, the suspect can be seen struggling with police. The suspect is then tased. With the suspect on the ground, halfway out the door, police tried to handcuff him but were unsuccessful. One officer had his knee on the suspect’s back.

“Don’t get on his neck now,” Fields said to the officer, who then explained his tactics.

The officer then asked Fields and the other witnesses to assist them in the arrest. Fields told the suspect to calm down and not resist, while others freed his hands so the officers could put on the handcuffs. The suspect was eventually taken to a hospital for what appeared to be a mental episode and charges were never filed, according to HPD.

For Fields, the whole situation was personal.

Fields said that for 15 years he was involved with drugs, stealing and lying. But, since 2015, he’s carried a crumpled piece of paper in his wallet, an acquittal from a jury. A day that changed his life.

“A jury of 12 people shook my hand and told me they see something in me.”

Now he tries to see the good in all on both sides of the law.

Field’s video has hundreds of thousands of views. On Thursday, musician Timbaland shared it on his Instagram page with the comment, “They got it right this time‼️ 🙏🏽HPD.” Snoop Dogg replied to the video with a blue heart.

At the end of Fields’ video, you can hear him say to officers, “I appreciate y’all, man. Letting us help y’all.”

Officers in turn respond with, “Thanks, guys. Thanks.”

Fields said he’s thankful for how the officer who asked for help responded to the incident.

It's an arrest that has become an example of what working as one can do.

This is why I love Houston, TX! We may not be perfect, but
@houstonpolice & HTX have relationship second to none.

Thank you Lauren and all involved for showing what community is all about. We will be recognizing the officers and community members soon. #RelationalPolicing https://t.co/NbHak93W8N