A pair a brothers' encounter with Tom Holland stole the show during the Spiderman actor's Q&A panel at Comicpalooza over the weekend. 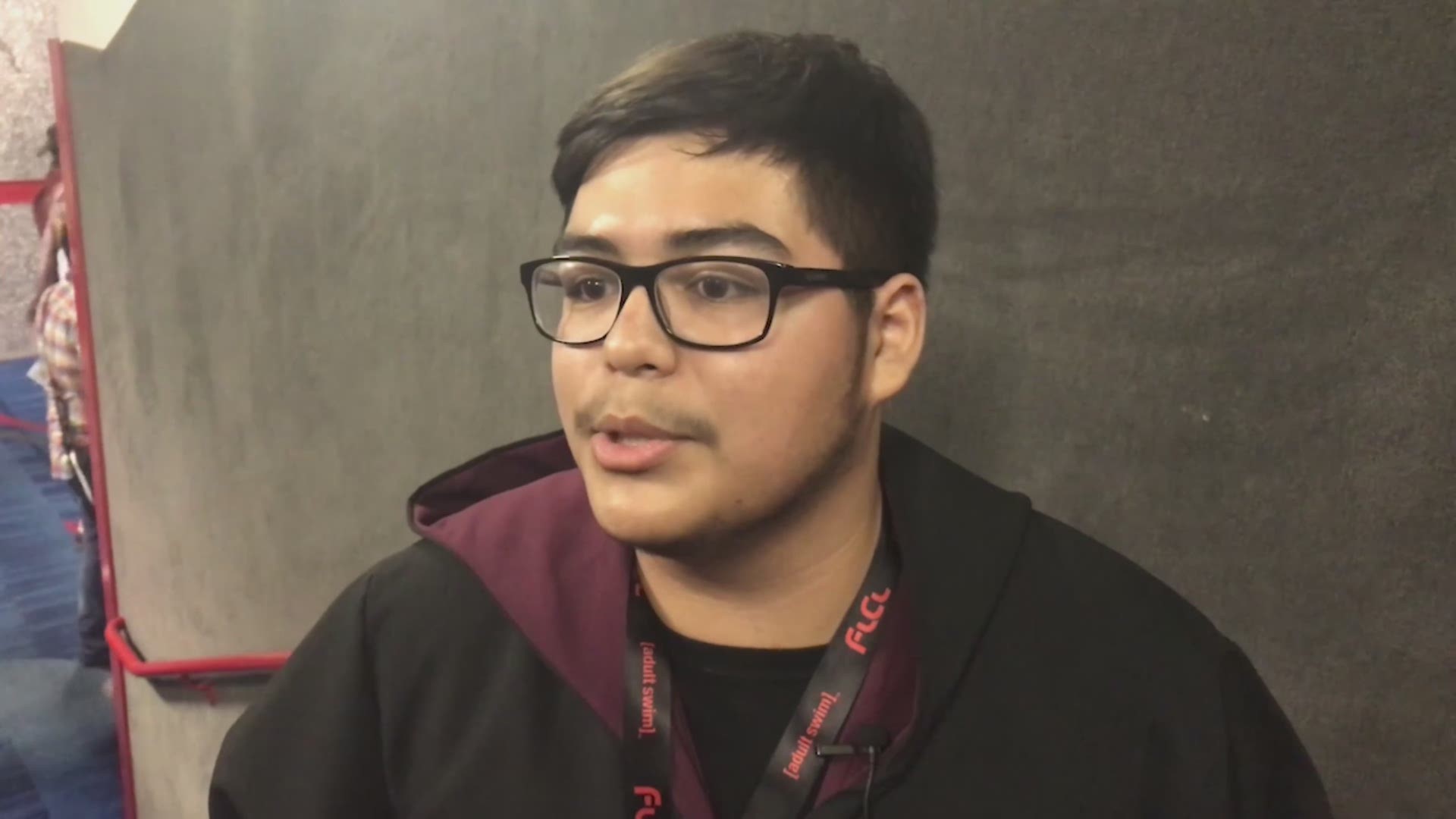 HOUSTON -- A pair a brothers' encounter with Tom Holland stole the show during the Spider-Man actor's Q&A panel at Comicpalooza over the weekend.

The 21-year-old star of the Marvel Studios franchise was the headliner for the 10th annual sci-fi and pop culture convention held Memorial Day Weekend at the George R. Brown Convention Center.

Saturday afternoon, Holland took the stage in front of cheering and yelling fans in the packed General Assembly Hall on the third floor of the GRB for his question and answer session.

However, shortly into the Q&A, Holland decided to change things up realizing that there was an empty couch between him and the moderator.

Holland then asked who wanted to join him on stage, getting a huge reaction from the crowd. After selecting fans from both the right and in front of the stage, Holland looked to the crowd left of the stage.

That is when Gerrado Israel Garcia, a senior at Jersey Village High School, and his younger brother Angel jumped at their chance.

"Whoa this is not expected," Gerardo said when the opportunity presented itself. The teen yelled and pointed at his little brother Angel.

And sure enough, Holland invited the 9-year-old to join him.

I’m so happy that I was able to hang out with Tom Holland!!! pic.twitter.com/NW505pNtui

"I was about to cry, this was his (Angel's) dream come true," Gerardo explained following the panel.

The teen said he begged his mother to allow Angel to go with him to the convention, explaining this could be the only chance they ever got to see Holland in person.

However, the panel was going to be the only way they could see the Spider-Man star.

"We have general admission passes, we couldn't afford the photo and meet and greet," Gerardo said. "(This) means the world to me."

A pair a brothers&#39; encounter with Tom Holland stole the show during the Spiderman actor&#39;s Q&amp;A panel at Comicpalooza over the weekend.

Not being able to afford the extra perks was tough on Angel, but the Spider-Man fan couldn't contain his excitement once he got on stage.

"It was exciting for both of us, I wanted my brother and me to have fun here," Angel said. "He begged my mother to (let me) come over here, I was heartbroken when we couldn't buy the things (like autographs and photo ops), and then when he (Holland) invited me on stage, I was like 'what, how did I get here.'"

My dream really came true, and to experience this day with Tom Holland, it meant a lot to me😊 pic.twitter.com/pf6ZsELss6

And it didn't take long for the 9-year-old to make himself comfortable in front of the crowd in the General Assembly Hall.

"He made himself at home, (even) asking his questions," Gerrado said.

Angel got even more comfortable, moving from his spot on the couch to sharing a chair with Holland himself.

"When he invited me to come sit next to him I was about to cry," Angel said. "I was happy."

Angel and @TomHolland1996 are the father son duo I didn’t know I needed they’re so cute 😭😭 #Comicpalooza pic.twitter.com/EXzFEMe3WR

Gerrado said he was a bit worried at first, concerned that Angel might have overstepped a boundary.

"Angel sat next to Tom like he was making a new best friend," he said.

Holland even put his arm around the young fan as the Q&A continued.

Then Angel wanted to be able to share his big moment with his older brother asking Holland if he could give him a shout out and invite him on stage too.

“My heart dropped, when he invited me on stage,” the teen said. “Being 10 feet away from Tom Holland.”

Gerrado then took the stage and sat where Angel had originally been sitting on the couch with the other guests. The teen said his phone kept getting notifications from friends in the crowd texting him on his and Angel’s big moment.

Gerrado then thought about his friend Alexis, who he explained was also a huge Marvel fan. He asked Holland if they could call and Facetime with her on a video chat.

The Spider-Man star agreed, but there was no answer on Alexis’ end to the disappointment of the crowd who was eagerly awaiting her reaction.

This picture makes me honestly so happy. I was worried that me calling back was an overstep and that I missed my chance but watching the panel videos and seeing pictures like these makes me less afraid of how annoying I am. #comicpalooza #TomHolland #stillthebestmomentofmylife pic.twitter.com/EMgZbH9KTM

Then after the Q&A panel continued, Gerardo’s phone starting ringing and rushed back over to where Holland and Angel were sitting. Alexis had called back and was ecstatic to see Holland with her friends.

Best moment ever. Thanks @TomHolland1996 for talking to me even if we couldnt understand eachother half the time. Looking back on everyones videos are insane that moment was such a blur #TomHolland #Comicpalooza #icantbelievethatjusthappened pic.twitter.com/4wS8601WhL

“She said it meant the world to her,” Gerrado said.

I can’t go without posting this omg “Thanks Tom Holland, you’re the best actor of the world “ I just want to hug Angel aww pic.twitter.com/XfDa5vL1UH

As for Angel, being on the stage was quite an experience.

"I felt like I was famous, this is how Tom Holland feels, I am sitting next to the movie star Spiderman," Angel said.

The young fan explained that the actor lives up to his character’s name.

this is too PURE pic.twitter.com/zPlTnF9MPQ