Houston teens set aside beliefs to celebrate Day of Unity

"We shouldn't be letting petty, political differences, get in the way of our personal relationships," said high school senior Adam Hoffman. "We decided, we need o take action, and that's what we're all doing here today." 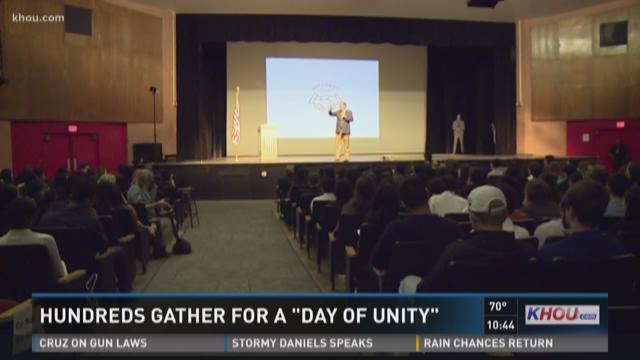 HOUSTON - A day after teens across the country protested a lack of gun control and a need for increased school safety during a "March For Our Lives" rally, about 250 Houston-area high school students packed the auditorium at Bellaire High School for a "Day of Unity."

It just so happened that the events were back to back. The Day of Unity was scheduled back in September, months before the massacre in Parkland, Florida which sparked the March For Our Lives protests.

"Culture shifts begin with young people," said high school senior Adam Hoffman. "We’re the greatest stakeholders in our future, it’s up to us to step up and to take these issues on."

Hoffman and other high school students organized the "Day for Unity" event. They're hoping the event catches momentum nationwide.

"We shouldn't be letting petty, political differences, get in the way of our personal relationships," said Hoffman.

U.S. Senator Ted Cruz, State Representative Joaquin Castro and Houston Mayor Sylvester Turner spoke to 250 students about how it's possible to have a discussion with someone who doesn't share your same beliefs.

Cruz acknowledged the power of young people, just one day after they marched to his downtown Houston office during the March For Our Lives rally.

"I think everyone has a first amendment right to express their views. I’m glad to see young people expressing their views," said Cruz. "I think we need to come together, and look towards real solutions."

"This is a polarized time," said Cruz. "Unfortunately, we’re a divided country. It’s impressive to see high school students here taking the lead. We had a civil, respectful conversation. There’s some who agree with what I have to say, some who disagreed."