Houston Police Chief Art Acevedo promised transparency in the case but protesters are angry no action has been taken two months after the shooting. 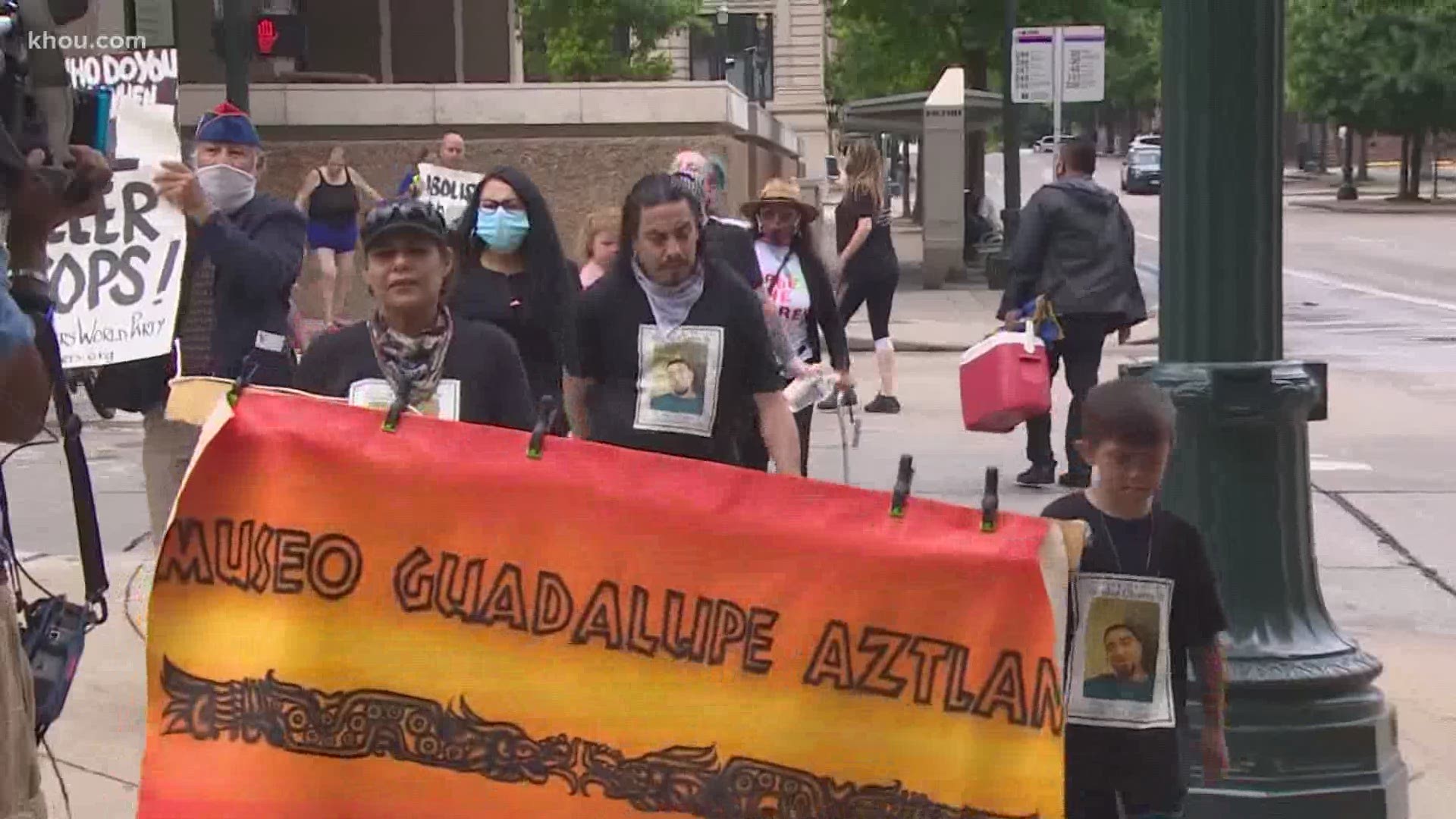 HOUSTON — Protesters marched through the streets of downtown Houston Friday demanding the release of body cam video of the HPD police shooting of Nicolas Chavez.

LULAC organized the march to demand action in the east Houston shooting death of Nicolas Chavez.

"What's his name? Nicolas Chavez! How did he die? On his knees!" protesters shouted.

Chavez, 27, was shot several times by police officers on April 21.

“Nicolas Chavez was shot on his knees, as he had been incapacitated. They shot 30 rounds of lead into him,” said LULAC Director Agustine Pinedo. “This, to us, is murder. This is murder because he was not a threat to them.

Protesters want to know why no action has been taken nearly two months after the shooting.

He said the district attorney's office told him they haven't received the case yet.

Chavez's widow has seen video of the shooting posted online by a witness and she believes the officers went overboard.

RELATED: 'He was already on his knees' | Widow says Houston police went overboard when they opened fire

Houston Police Chief Art Acevedo promised transparency in the case and said bodycam videos would be released once the investigation is complete.

The whole thing started when officers responded to calls about about an armed man -- possibly trying to commit suicide – who was running in and out of traffic on the I-10 feeder road.

When he saw police, Chavez started running through the neighborhood and jumping fences. They found him near I-10 and Gazin armed with, what they believed, was a knife, according to Acevedo, which they later learned was a piece of rebar.

“This individual kept coming towards the officers, refusing commands to drop the knife, drop the weapon," Acevedo said.

The weapon turned out to be a piece of rebar. Acevedo said Chavez used the piece of rebar to cut himself several times during a brief standoff.

Acevedo said two officers discharged bean bags, then three Tasers were used, bringing Chavez to his knees but not disabling him.

“He was already on his knees. They should have at least tried to tackle him," Jessica Chavez said.

She said her husband had mental issues but doesn’t believe he was trying to commit suicide.

As for the witness video of the shooting circulating on social media, Acevedo said it doesn't tell the whole story.

“It’s difficult to watch and it’s something that will raise questions for us just like any use of deadly force," he said.

He said the shooting was also caught on the officers’ body cameras.

“We have invested in a body-worn camera system that will bring transparency to this process and will give an opportunity for everyone involved to make their own assessment," Acevedo said.

There are four officers and one sergeant who are now on administrative leave.

This case is being investigated by the HPD Special Investigations Unit, the Internal Affairs Division and the Harris County District Attorney's Office.

Before Friday’s protest, Chief Acevedo, Mayor Sylvester Turner, and more than a dozen other elected officials, union representatives, and community and faith leaders held a roundtable discussion on police reform at City Hall.

“We need to minimize contact that the public has with the police,” said State Senator John Whitmire (D-Houston), who chairs the Senate Criminal Justice Committee.

U.S. Senators John Cornyn and Ted Cruz of Texas are working together on the Justice Act. It includes an anti-lynching law and a national appointed criminal justice commission. It also incentives body camera usage and easier access to disciplinary records for outside agencies.

“So that you know if you’ve got someone who’s got a problem disciplinary history that they’re not just gonna be able to move from one agency to another,” said Sen. Cruz.

Mayor Turner said officers are being asked to handle too many issues better left to health care professionals and social workers.