Worldwide ministries like the one Joel Osteen leads is built on a foundation laid by Billy Graham, who used televised crusades to convert millions to Christianity for more than 60 years. 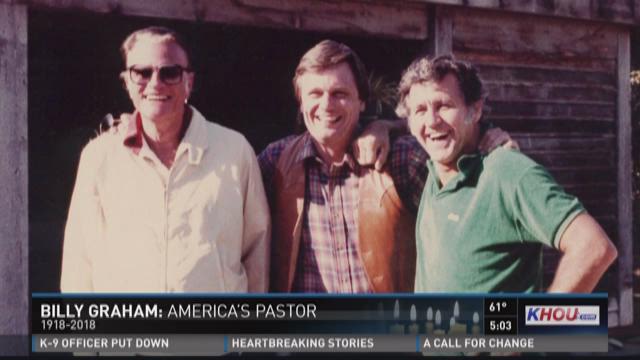 A modern-day prophet: That’s how one of Rev. Bill Graham’s closest friends in Houston describes the late evangelist.

Worldwide ministries like the one Joel Osteen leads is built on a foundation laid by Graham, who used televised crusades to convert millions to Christianity for more than 60 years.

“Growing up as a preacher’s kid, we used to sit around and watch him,” Osteen said. “He was a real hero in our house, and being able to meet him was unbelievable.”

Osteen describes Graham as the most humble and gracious he’s known, next to his own father.

“I’m sure we’re all benefiting, all of us believers in Christ are benefiting from his life,” Osteen said.

Graham’s long life included several visits to Houston. That includes a 10-day crusade at the then-brand-new Astrodome. Some 700,000 people packed what Graham may have been one of the first to call “the 8th wonder of the world.”

“I think Billy Graham was the most influential man of the 20th century, no matter who you name,” said Second Baptist Church senior pastor Ed Young.

Dr. Young knew Graham for decades, worked in his crusades and emulated his style when he started preaching himself.

“I imitated him for my first 10 years,” Young said. “He was a model in the pulpit and in his personal life. He had great humility.”

Young considers that humility one of Graham’s most enduring legacies. That’s despite the fame and influence he gained as the world’s best-known preacher.

Graham’s life included controversies from time to time. But Young says his faith always got him through it.