"[His] life and legacy was based on the seriousness of now. He knew that America and the world could not wait for freedom, justice or equality." 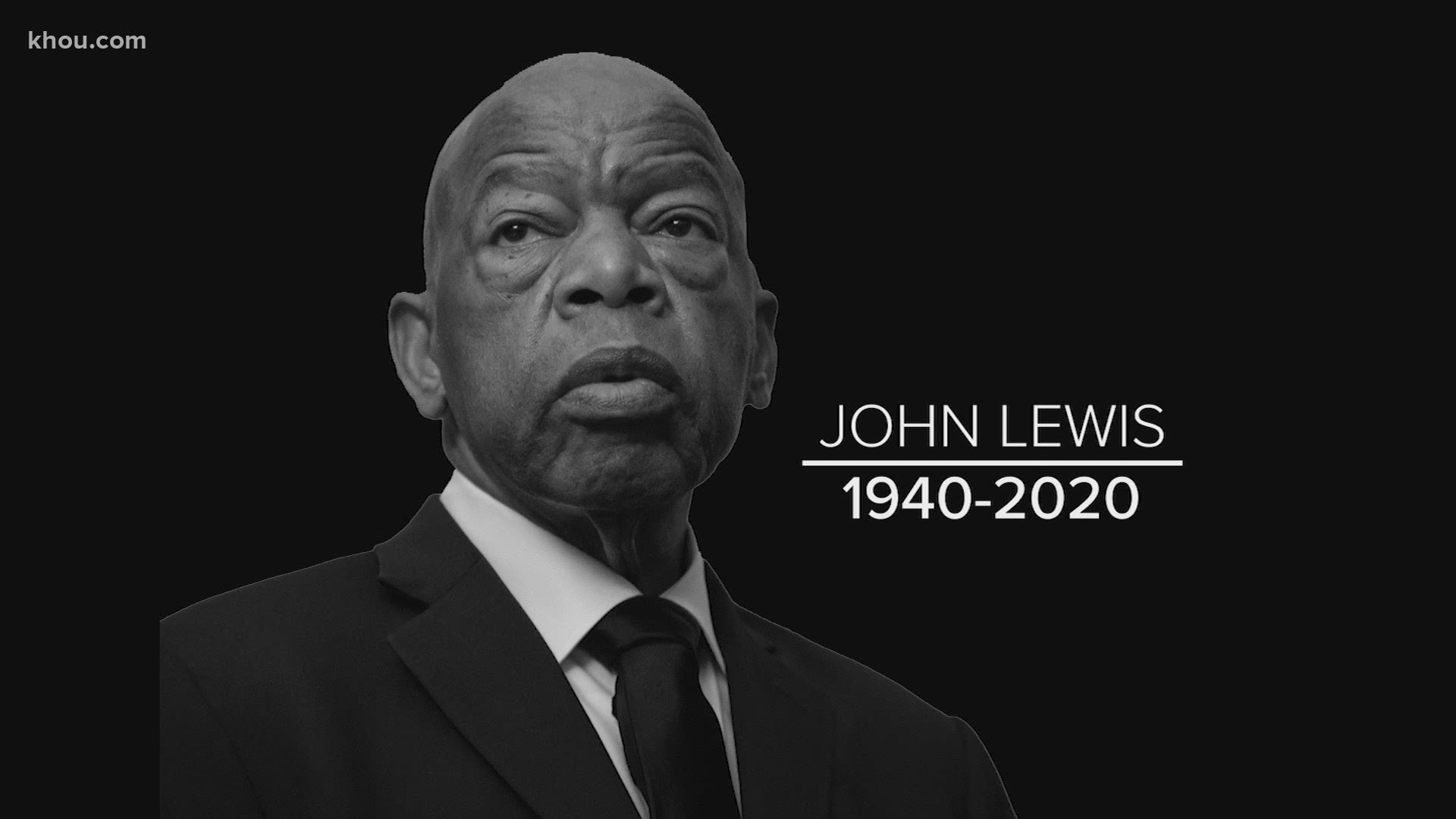 Lewis passed away Friday at age 80. It's been seven months since the congressman announced he was battling advanced pancreatic cancer.

One of his most notable accomplishment was his role in organizing the 1963 March on Washington, which is where Dr. Martin Luther King Jr. gave his famous "I have a Dream" speech.

The lights of Houston City hall tonight are red, white and blue in honor of @repjohnlewis, an American hero.

“He may have been elected by a single congressional district in Atlanta, GA., but his life of service impacted all of us,” @houmayor Sylvester Turner. #RIPJohnLewis. pic.twitter.com/18g19Fa1Ty

In 2019, Lewis was named Grand Marshal of the City during the Black Heritage Society MLK Day Parade and honored for his decades of civil service.

"Rep. Lewis was a warrior in the fight for civil rights. He was an honorable man who exuded grace and dignity while he fought passionately for racial equality and justice for all," Turner said in a statement. "During his service and leadership in the U.S. Congress, Rep. Lewis was a champion for uplifting people and advocated for affordable housing, fair pay, education, voting rights and so much more.

Tonight, our nation has lost a civil rights hero and fighter for justice. @repjohnlewis was a strong warrior who remained in the ring bringing truth to power for those who needed it the most. As he stood for many, now is the time for us to carry on his legacy. Rest in power. st pic.twitter.com/bwqpiJT8kT

“The world has lost a beloved brother in the name of the Honorable John Lewis. John Lewis’ life and legacy was based on the seriousness of now. He knew that America and the world could not wait for freedom, justice or equality. From his early days as a boy from Troy, Alabama, he would leave home to follow in the footsteps of his heroic mentor, Dr. Martin Luther King, Jr., who established the Beloved Community and the importance of the Civil Rights Movement to move America forward. John Lewis never stopped moving America. He never stopped challenging America. And in the United States Congress, no matter what John Lewis fought for, he fought for it with dignity, grace, and fierceness. In his speech at the 1963 March on Washington, he indicated that we wanted freedom, not in drafts, but we wanted it now. Everything that John Lewis did was with a fierceness of now. John Lewis’ legacy for this nation is to embrace all people, no matter who they are and no matter what they are. So, it is important that John Lewis’ message never dies.”

“I was very pleased to be able to speak with him last week. He was strong, fierce and powerful. And of course, he was a man of strength and resolve that believed America’s divisiveness cannot end without a commitment to the Beloved Community. We will miss John Lewis forever. But what we must do is continue the journey that John Lewis started, and that is a journey toward freedom. And important journey and a journey that we should never ever forget. The life and legacy of John Lewis is a legacy of the fierceness of now. And the fight for freedom does not end until it is attained. The Beloved Community, America, has lost not a hero of this country, but a hero of the world.”

"For decades, [Lewis] was a Civil Rights icon and more. He was not only the conscience of the Congress; he was a constant in the battle against systemic racism and all forms of hate in our country," Green tweeted. "[He] made it safe for others to stand on the righteous grounds of human and civil rights for all."

For decades, @repjohnlewis was a Civil Rights icon and more. He was not only the conscience of the Congress; he was a constant in the battle against systemic racism and all forms of hate in our country.