Fire union president Marty Lancton and the union legal advisor met with the mayor and his team. They said the union provided the mayor with a letter regarding future negotiations. 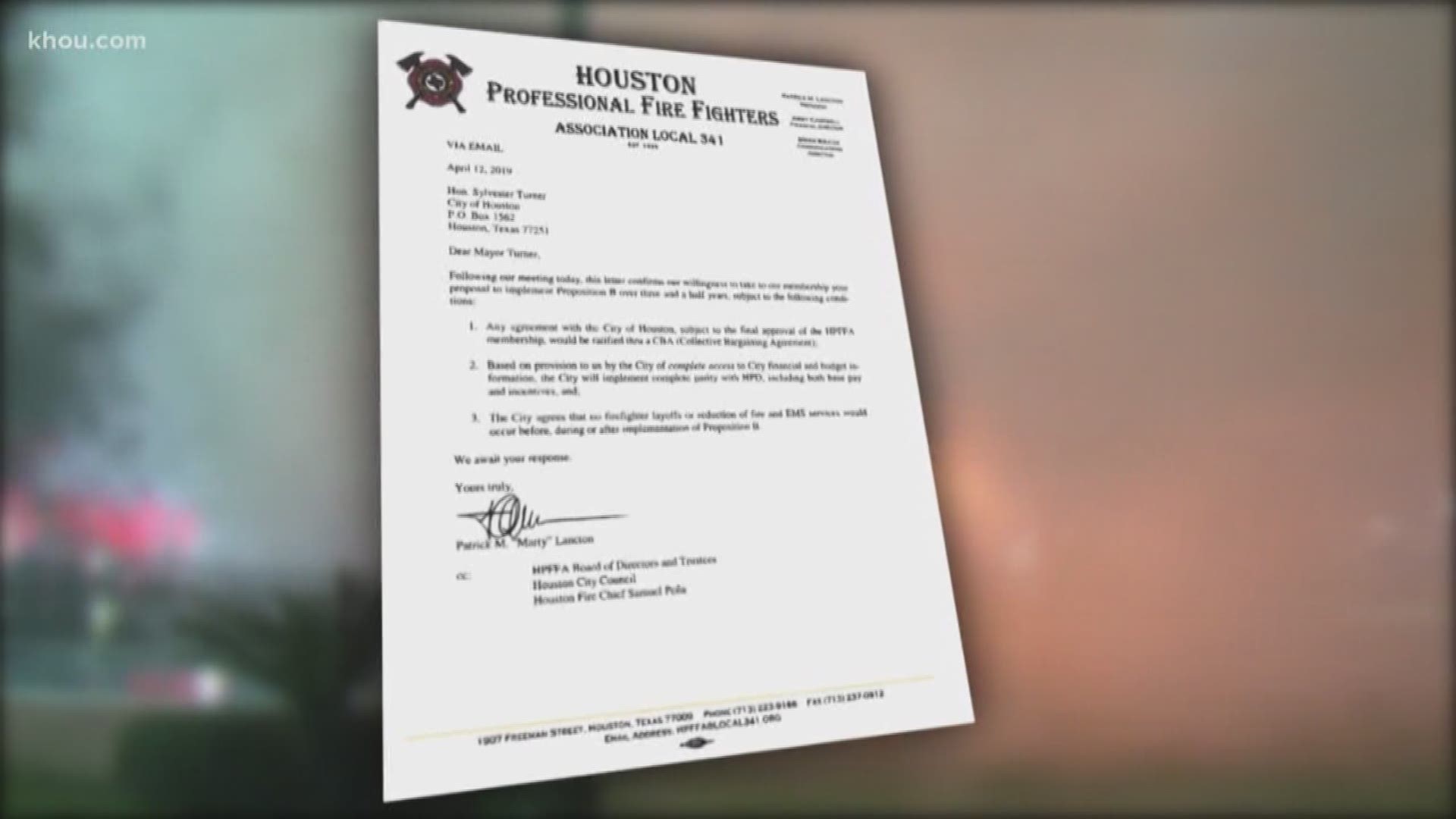 HOUSTON — Houston firefighters have agreed to resume negotiations towards the implementation of Proposition B with the Mayor Sylvester Turner -- but with conditions.

They said the union provided the mayor with a letter regarding future negotiations to implement Prop B over the course of three and half years.

“1. Any agreement with the City of Houston, subject to the final approval of the HPFFA membership, would be ratified though a CBS (collective bargaining agreement);

“2. Based on the provision to us by the City of complete access to the City financial and budget information, the City will implement complete parity with HPD, including both base pay and incentives, and;

“3. The City agrees that no firefighter layoffs or reduction of fire and EMS services would occur before, during or after implementation.”

Mayor Turner sent a reply to Lancton Friday afternoon after their meeting a few hours earlier. The following is the letter in full:

I invited you to meet with me today to discuss phasing in Prop B. We talked about possible common ground, and we agreed to meet again next week to allow the City to do some additional work.

While I think such "tactics" are not helpful, I will nevertheless be prepared to meet again next week.

I hope you will refrain from further steps that will undermine my effort to find common ground.

As I have said repeatedly, I do not want to lay off anyone. This requires your agreement on a path forward that the City can afford.

Earlier this month, 67 HFD cadets were sent 60-day layoff notifications as a result of Prop. B.

Voters approved the law last November to make firefighter salaries comparable to their counterparts at the Houston Police Department.

Turner, however, has cautioned that Prop B did not come with a funding source and said it would cost the city $80 million to implement the 29-percent firefighter pay raises.

Turner said he offered the union both a five-year and 3 1/2-year phase-in option.

This week, 47 municipal workers were expected to receive notices. And on April 17, City Council will vote on layoffs of first responders, Turner said.

“Nobody wants to see public employee layoffs, but just like hard-working Houston families, the city must live within its means and reduce expenses to pay its bills when income is limited,”  Turner said. “There’s no magic wand we can use to make financial challenges disappear.”

The fire union has been critical of the mayor in public statements.

Responding to the layoffs last week, the union representatives said the decision reflects Turner's "ineptitude, egotism, and a new depth of his vindictiveness."

The cadets had finished training but had not been sworn in yet. These same cadets filed a federal complaint against Mayor Turner and Chief Sam Pena last month citing discrimination and retaliation. Because they had not been sworn in, council approval is not needed for the layoffs.