"From what I can gather, the whole stage is going to go black and we get about 17 seconds to get everybody on stage in our choir risers<' explained the director of the Houston Show Choir. "So, we're this extra dimension that comes in for these big final three songs." 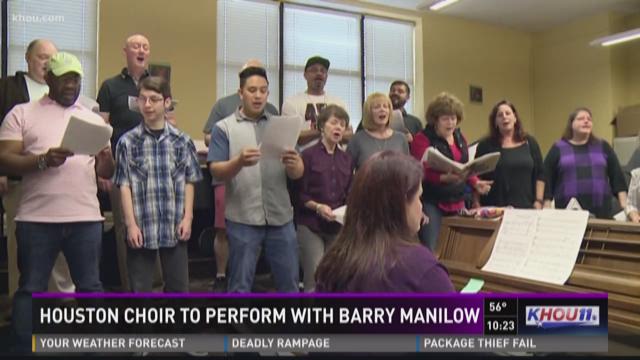 HOUSTON - Grammy award-winner Barry Manilow will be in concert in Sugar Land this Friday. The music legend will sing his greatest hits with the help of the Houston Show Choir.

Thirty-two of the choir's 70 members will participate in the February 2, 2018 concert. This weekend, the group rehearsed at a middle school in The Heights.

The Houston Show Choir is a volunteer-based, unpaid singing group. Members range in age from 20 to 71-years old.

"There are a few in this choir that were probably born well after he was more than famous," said 62-year old member Rhonda Cold-Thrailkill.

Friday, the group will wear black robes and have only 17 seconds between songs to enter the stage at the Smart Financial Center.

"We’re doing, 'I Write The Songs,' 'Copa Cabana' and 'Miracle,'" said Young. "From what I can gather, the whole stage is going to go black and we get about 17 seconds to get everybody on stage in our choir risers, behind everything else. So, we’re this extra dimension that comes in for these big final three songs."

The Grammy-winning Manilow first found the singing group two years ago when he needed a local choir to boost his performance in 2016. They sang so well, the choir was asked to return for this year's performance. They're the only local musicians singing with Manilow.

"We actually get to meet him when we’re on stage with him," said Young. The group will rehearse with Manilow's band Friday ahead of the performance.

"I would just like to be able to shake his hand and say thanks," said Young. "Thanks for your contribution to music and the musical world."

Dude! The @HouShowChoir is singing backup for @barrymanilow this Friday! Sat in on their rehearsal for a story tonight on #khou11. How cool... they get to sing THIS song with the #MusicLegend pic.twitter.com/fcKX4OvFc6