So many families struggling to pay bills, and feed their families are also worried about being evicted. 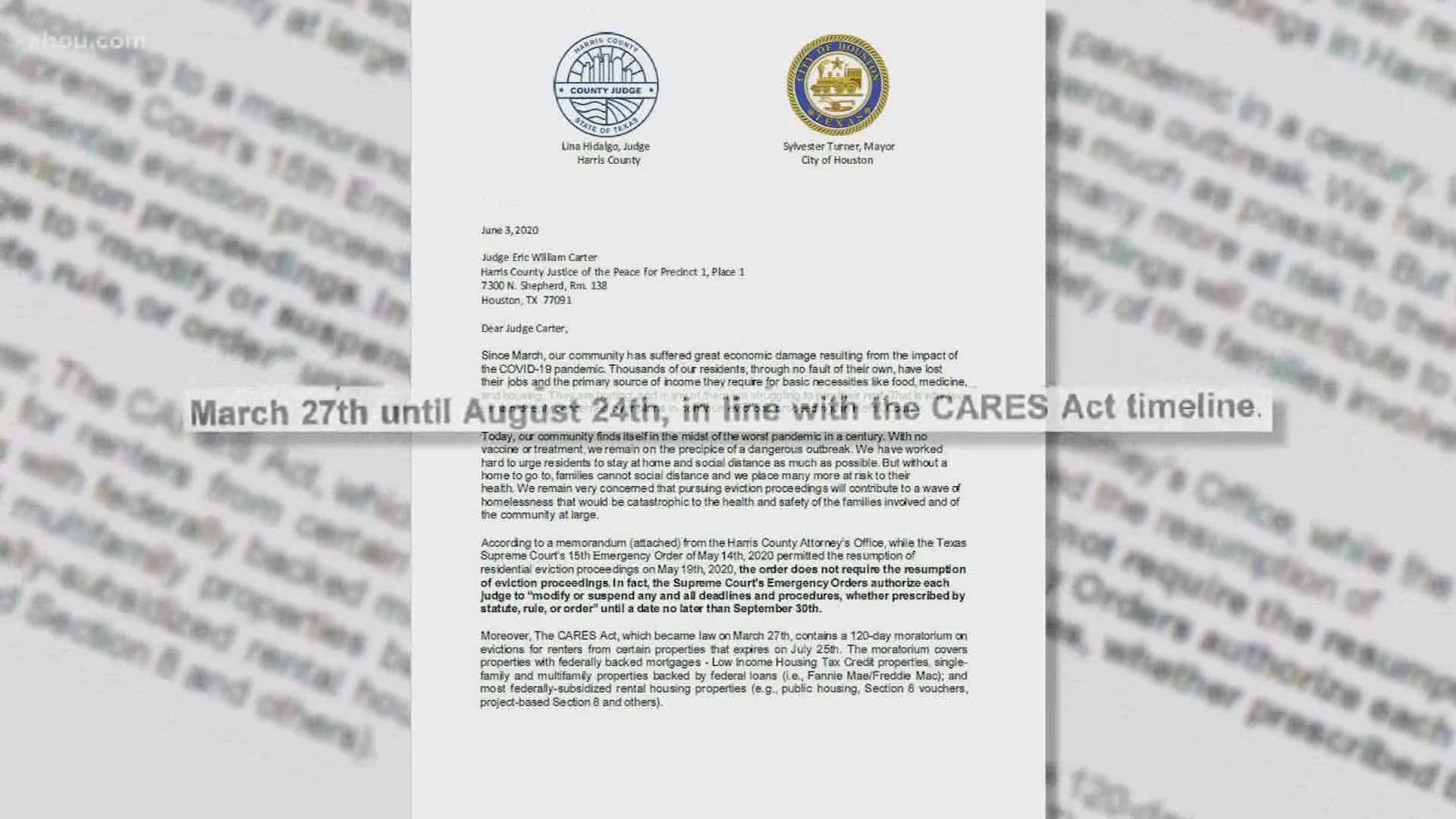 HOUSTON — Tens of thousands of local residents are out of work because of the coronavirus pandemic, and many are facing evictions that could leave them homeless.

The CARES Act, which became law on March 27, protects renters until Aug. 24 – but only if they have federally-backed mortgages or live in federally-subsidized housing.

But a Supreme Court ruling in May allowed eviction proceedings for everyone else to continue.

Now, Harris County Judge Lina Hidalgo and Mayor Sylvester Turner are asking justices of the peace to postpone evictions for all renters until late August.

“Thousands of our residents, through no fault of their own, have lost their jobs and the primary source of income they require for basic necessities like food, medicine, and housing,” Turner and Hidalgo said in a letter to the JPs. “They are hurting, and many of them are struggling to pay their rent.”

RELATED: Do you qualify? How to apply for COVID-19 relief in Fort Bend County

They warn that continuing eviction proceedings will contribute to a “catastrophic” wave of homelessness that would create a public health risk.

“We urge residents to stay at home and social distance as much as possible. But without a home to go to, families cannot social distance and we place many more at risk to their health,” the letter said.

The county attorney confirmed that justices of the peace have the power to postpone evictions.

“Doing so is not only the right thing to do given the current crisis, but will contribute to our effort to protect public health and eliminate confusion surrounding the federal eviction moratorium.”

Opponents of the moratorium point out that landlords have to pay their bills, too.

Many renters, like those we’ve met over the last few months, may be forced to move out.

“I live in an apartment, and it’s just really frustrating, because there’s no cash coming in,” one renter told KHOU 11.

"If we see mass evictions, that would be not only difficult for those being evicted, but for the community at large," Hidalgo said. "Particularly when we’re asking folks to try and stay home.”

"We do our best to keep people in their homes," said Houston Apartment Association president-elect John Boriack. “Eviction is always the last resort.”

He said the majority of landlords are already setting up payment plans, waiving late fees and even coordinating rental relief.

"Nobody’s asking the grocery stores to give food to people and receive payment in the form of an I.O.U.," Boriacck said.  "And we’re being asked as business owners, more or less, to supply our product, which is housing, to customers with no guarantee of a repayment with these eviction moratoriums in place.”

Boriack added delaying evictions only hurts renters in the long run by piling up back-payments.

"Right now, we have received an official opinion from the county attorney that the Justices of the Peace have full discretion and authority to postpone evictions,” Hidalgo said.

Ultimately, the fate of renters appears to be up to those individual judges. We have yet to receive responses from them.

More than 2.3 million Texans have filed for unemployment since mid-March, according to the Texas Tribune, and some still haven’t seen their benefits.