'Her guardian angel was right there with her'

A now-viral photo captures the strong connection between family, in this life and the next. 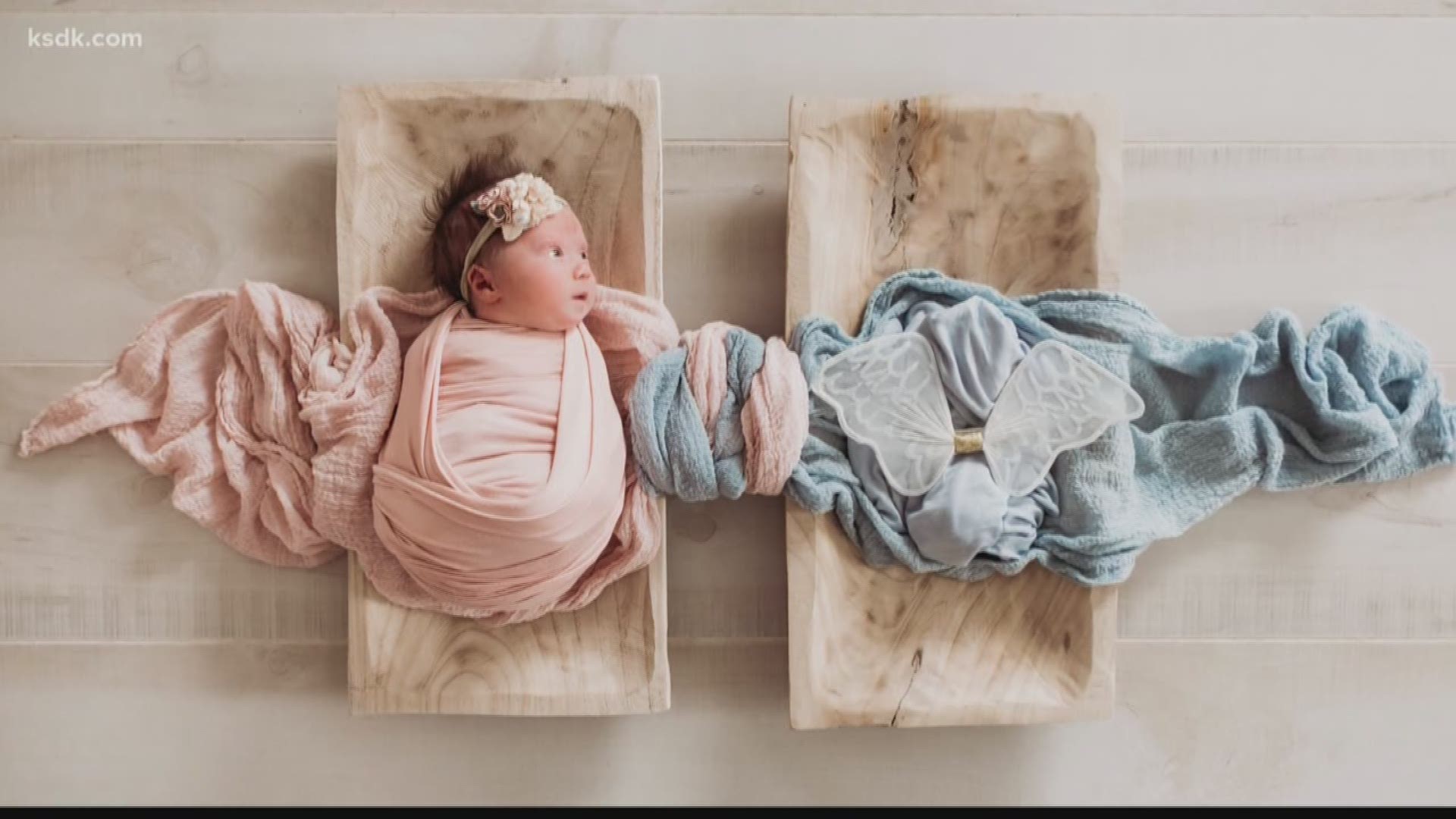 BELLEVILLE, Ill. — You might see it as a picture of loss, a baby girl gazing toward where her twin brother should be. But Heather Bowman thinks her daughter sees something else.

“Her guardian angel was right there with her,” she said.

Scooping up her crying daughter, Leti, Bowman happily soothes her. Bowman’s waited her whole life to hear these cries, because she shed so many of her own to get here.

“A loss is a loss and you don't ever get over it, you just get through it,” she said.

Bowman is sitting beside with Jessica Young, who captured the now viral photo and is hearing the details of Bowman’s story for the first time.

“I had a loss as well, so I understand… the need to have something to visually remind you that that baby existed,” said Young.

The first set of reminders are tattooed footprints on her write: Bowman conceived and lost her first set of twins shortly after she started working with a fertility specialist. In her late 30s, she turned to IVF.

But from there, hers is an unlikely story. A series of rare complications, including a uterus half the normal size, meant a tough go for the three of them—Bowman, Leti, and the son she’d call James.

“The other doctors had suggested I reduce a baby, and they wanted me to reduce my daughter because she was the one who was the slower one to develop,” she said.“ Reduce a baby means basically abort a baby. And I-- it goes against everything I stand for.”

She wanted to give both babies a fighting chance. And she did, until some devastating news at a routine checkup.

“The sonographer was like, doing the ultrasound and was like oh, heartbeat's great, and she didn't say anything about my son's, and I was like ‘What's my son's, I'm sorry, you didn't tell me that?’ and she said, ‘I’m sorry, I couldn't find a heartbeat.’ Wait, what?”

There wasn't enough blood flow for both of them. James wouldn't survive—but somehow, Leti took a turn for the better.

“I can't let this overcome me because this could affect my daughter,” she said. “I had her to bring into this world and make sure she got here.”

“I feel like was almost better because I felt like he was a part of us and he was, you know, he gave his life to help his sister get here,” she said through tears.

“I don't know how you go through all of that and still remain so positive,” said Young, now crying, too. “I think that will always stick with me.”

“The wheels started turning right away, that I wanted to do something special.”

Even with all of the planning, nobody could've staged the final result.

“I was like, oh my god this could not have been better, you know? She was looking over at where he would be which made me feel so good,” said Bowman. “It gave me a lot of sense of peace.”

“She kept looking over there,” remembered Young. “And I kept moving her head because that's usually how you get her whole face and she was like, nope!”

Leti may have seen her brother, and when the photo went online, thousands of people saw the unbreakable connection between family—in this life and the next.

“To me, it's helpful to talk about which is where this whole thing is pretty awesome,” said Bowman.

The photograph, she said, has provided a platform on which people can talk about their own experiences with loss and infertility.

But she also credits Facebook groups and connecting with others experiencing the same complications with helping her find clarity.

If you or someone you know is experiencing difficulty, here’s a list of a few local groups to help:

What other people are watching right now