The tunnels would transport water underground from flood-prone watersheds like Cypress Creek or the areas around the Addicks and Barker, diverting it away to areas where it can safely drain. 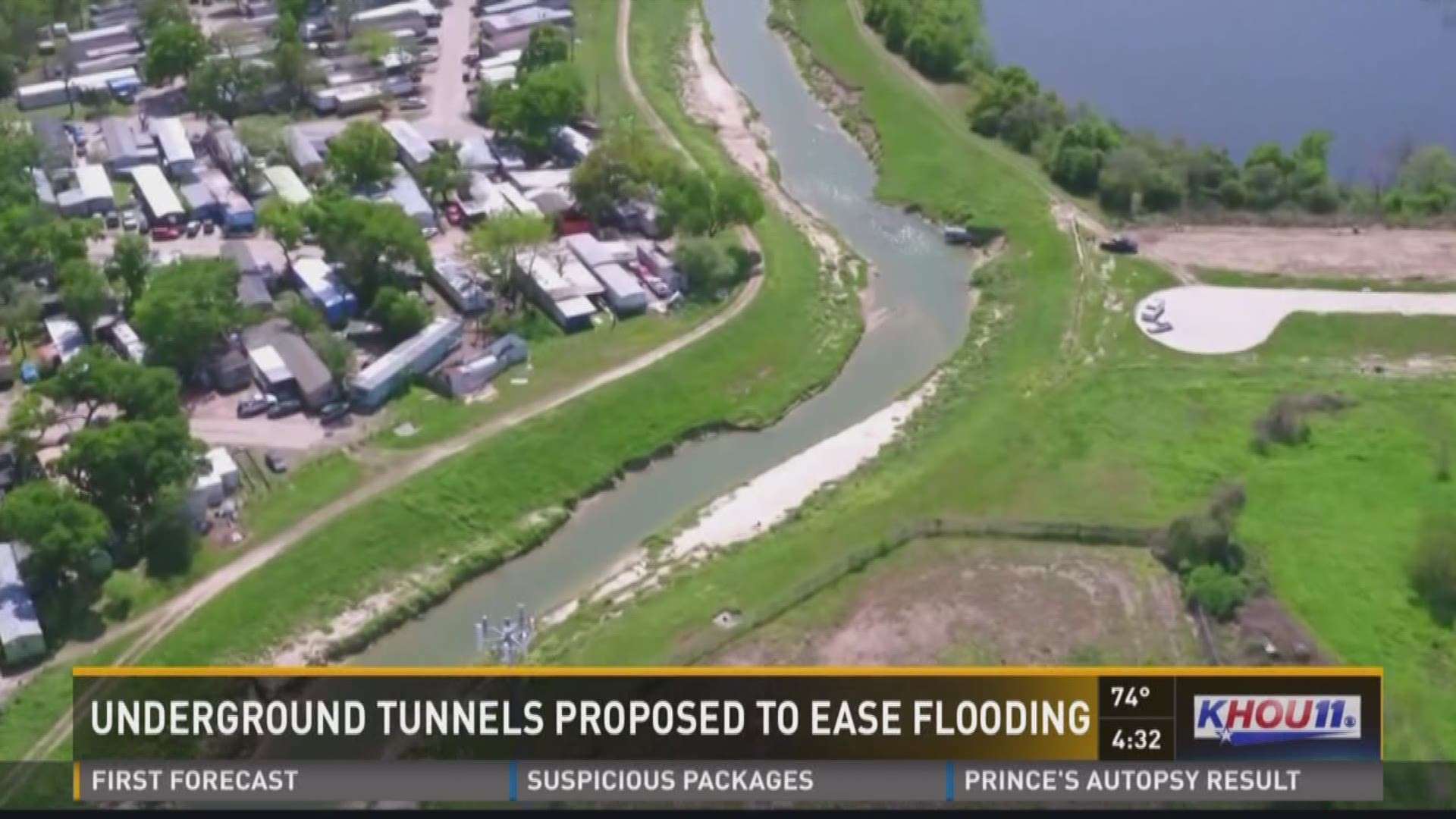 HARRIS COUNTY, Texas - On Tuesday, Harris County took the first steps toward building what could be billions of dollars’ worth of underground tunnels to spare homes and businesses from flooding.

Commissioners voted to move forward on negotiating a contract with Fugro USA Land, Inc. to study the idea over several months. Officials estimate the study will cost between $200,000 to $400,000 and cover the entire county.

Several months after Hurricane Harvey, many survivors in the West Houston neighborhoods near Buffalo Bayou are still facing several months of recovery.

“A few neighbors are back, but many are displaced,” said Will Hickman, whose home stood just 300 feet from the bayou. “We are building about three feet higher than the former house, and that’s not even the Harvey levels.”

Hickman is hoping government will fix the region’s flood control infrastructure to prevent another Harvey-level flood. That includes clearing bottlenecks and increasing capacity of the bayous, or even building a new canal or tunnel.

“I think everything makes sense to look at,” said Hickman. “Let’s do all of the above.”

Hickman shared his thoughts on a potential flood tunnel study with Harris County Commissioners on Tuesday, shortly before they voted on the matter.

Colin Leach, who lives just east of Barker Reservoir, also spoke to Commissioners. Leach said his home did not flood during Harvey but did take on rain damage.

“I like the idea of tunnels, I’m just not sure we have to go with tunnels the whole way,” said Leach.

Harris County Judge Ed Emmett said after the unanimous vote that the Harris County Flood Control District “decided that they would be remiss if they didn’t at least look at the idea.”

The tunnels would transport water underground from flood-prone watersheds like Cypress Creek or the areas around the Addicks and Barker, diverting it away to areas where it can safely drain.

Emmett says where those tunnels will be built, how far they’ll span, where the water will drain to, and how much the total tunnel construction will cost are all questions this study will try to answer.

“Our land is very flat here, and one of my requirements for making sure this is gonna work is these tunnels have to work without the need for pumps during a rain event,” said Russ Poppe, Executive Director of the Harris County Flood Control District. “They have to work by gravity.”

“If we look at potentially going along transportation corridors, we want to make sure we’re below the piles that support the overpasses,” said Poppe. “At the same time, the transportation corridors are an attractive option because they’re already there, they’re fairly straight and linear and projects. When you start talking about large diameter tunnels, the straighter the alignment, the more easy it is to construct.”

Emmett says other cities like Austin, Dallas, and San Antonio have built similar tunnels, but they’ve spanned short distances, with the typical cost ranging between $50 million to $100 million per mile.

“We need to think outside the box, but it could come back that it’s too costly, and forget about it,” said Emmett.

Emmett emphasized that Commissioners and Harris County officials are currently focused on carrying out other flood control project that could be funded by a possible flood control bond election. Emmett says that money, if approved by voters, would not be used on the tunnel project.