After voters in the 15 largest counties in Texas smashed the record for early voting in a non-presidential year by nearly 50 percent, political parties and election officials in Harris County are getting ready for potentially huge crowds Tuesday. 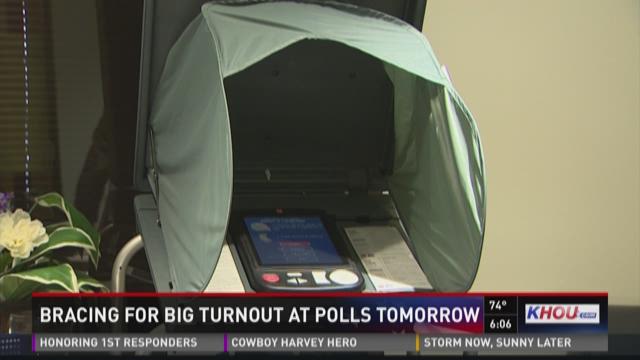 After voters in the 15 largest counties in Texas smashed the record for early voting in a non-presidential year by nearly 50 percent, political parties and election officials in Harris County are getting ready for potentially huge crowds Tuesday and aiming to avoid a repeat of the long lines and equipment shortages that plagued the primaries in 2016.

Stan Stanart, Harris County Clerk, says while the county will act as an advisor, it’s the parties, not the county, that picks the polling places during the primary.

He says each party gets half of the more than 700 total voting sites, which they choose based on the locations that serve the greatest number of their voters. Stanart says the parties also choose the number of workers and machines.

He says after dealing with long lines and lack of equipment during the 2016 primaries, everyone involved in 2018 has learned their lesson and is making changes to make the process smoother.

“The amount of equipment that’s pushed out is an estimate of what the parties estimate their turnout to be,” Stanart said. “The Democratic Party last time woefully underestimated. This time we have that as a baseline, though, so there’s a lot more equipment that’s pushed out to the polls. We expect with a faster check-in with our electronic poll books and with the extra machines that the lines should be very short.”

Stanart says the new electronic poll book system will be at 80 percent of Harris County’s sites, using iPads to scan IDs and check in voters nearly instantaneously, instead of having election workers flip through lengthy paper poll books to find the voter’s name.

The machines can also print out turn-by-turn directions to the correct polling location for voters who have arrived at the wrong precinct.

Lillie Schechter, Chair of the Harris County Democratic Party, says her party has been pushing its voters to cast their ballot early, but she says they have also learned their lessons from the 2016 primaries.

Vlad Davidiuk, communications director for the Harris County Republican Party, says his party has called on election workers from past years to come help again with what they’re expecting to be larger-than-usual turnout.

“We’ve hosted training classes here at the headquarters,” Davidiuk said. “We’ve offered them different resources they can use to maximize the efficiency of their operations, and we’re confident that all of these locations will work perfectly on Election Day.”

Stanart is expecting about half the number of people that voted early to vote Tuesday.

He says voters can vote in either primary but not both, and which party they choose determines the polling place, which is often different from their precinct in November.

To find where to vote, get a personalized sample ballot, and see a list of what voters can and cannot bring into the polls, click here.