Grandparents charged with kidnapping remain in jail for now

Prosecutors say they would be a flight risk and flee to Brazil. The couple is believed to be worth more than $10 million. 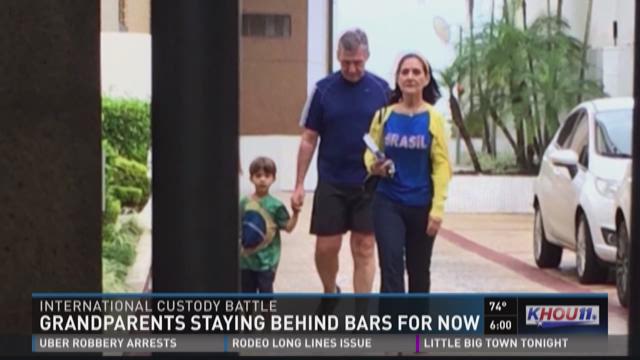 The Brazilian grandparents at the center of an international kidnapping case will spend at least a few more days behind bars after a day long high stakes bond hearing in federal court.

Carlos and Jemima Guimaraes wore green jumpsuits and teared up through parts of Wednesday's testimony. The government made its case about why this couple accused of International Kidnapping and Conspiracy charges should not get bail.

Prosecutors say they would be a flight risk and flee to Brazil. The couple is believed to be worth more than $10 million.

The government alleges they helped their daughter Marcelle abduct Nico from the United States away from his father Dr. Chris Brann in Houston.

Rusty Hardin, one of the defense attorneys representing the Guimaraes, instead tried to paint a picture of two elderly grandparents who don't deserve to be locked up and who would not run if given bail.

He presented documents alleging Brann physically abused his ex-wife and underwent treatment for sex addiction, citing that as a possible reason why their daughter took Nico to Brazil and never returned. Those allegations have never been substantiated in any court proceeding in Brazil or the U.S.

Ultimately the judge made no decision on bond Wednesday. Judge Dena Hanovice Palermo wants the Guimaraes to disclose more about the assets they own and present a plan to the court where Brann will have access to his son while these court proceeding play out.

Since the grandparents were arrested in Miami, Brann has not been allowed to have any contact with his son by his ex-wife.

"I'm disappointed we don't have a decision today," Brann said. "I'm eager to know what that decision is. I'm confident the judge will take into account all the aspects of the evidence that's been put forth. And I think the fact she's taking her time with it means she's taking it very seriously."

"There are two different jurisdictions fighting this," Hardin said. "Brazil has found against the father. Houston has found in favor of the father. That's a family civil matter. That shouldn't have anything to do with whether 67 year old couple without a single blight in their entire life is a bad risk to show up for trial and they're not."

A trial date has been set for early May. Judge Palermo will issue her decision no earlier than Friday. In the meantime, the Guimaraes will spend at minimum two more days in federal custody.